Sherpas: The People of the Mountains

Sherpas are some of the most well-trained and experienced climbers in the Himalayas. Their wisdom, strength and sharp instincts—in despite of their small figure—often leads outsiders to believe they have a ‘sixth sense’ or ‘magical powers’ in these isolated places. For this reason, companies wouldn’t think of going on an expedition or trekking tour without their guidance and assistance.

Yet, if you were to ask a Sherpa about these ‘heighten instincts’, they’d respond by saying (very humbly and modestly) that they don’t possess any special powers or characteristics; rather, they simply listen to the mountains and respect the custom that She (the mountain) always decides who goes up and who doesn’t, not man.

This is a big thought to grasp for foreign travelers and tourists who often feel they know what’s best based on experience, technology and gear. It’s not unusual for foreign climbers to visit the Himalayas with an ego about their abilities and feel because of their climbing background, high tech equipment or money and status, they’re able to close the gap around these ‘mountain mysteries’ and succeed with confidence.

“Ego in mountains leads to accident and death!” my instructor Mr. Kusang Dorjee Sherpa used to repeatedly state in my mountaineering course.

“Don’t think you know better than mountain or mountain people who born in these places. Even them don’t have ego and they from here!”

Mr. Kusang Sherpa is a 5 time Everest summiteer, and considering he’s summitted Mt. Everest from all three sides including the extremely difficult Khangsung Face (which has only been done by a handful of people in the world),  I’d say his advice is worth applying.

It doesn’t matter if you’re planning a trip to Everest Base Camp, Annapurna Base Camp or any other mountain base or peak in the Himalayas, having guidance from people who have lived and grown up in these barren, enchanting lands will not only increase your chances of reaching the goal, but will ensure your safe return to Kathmandu. 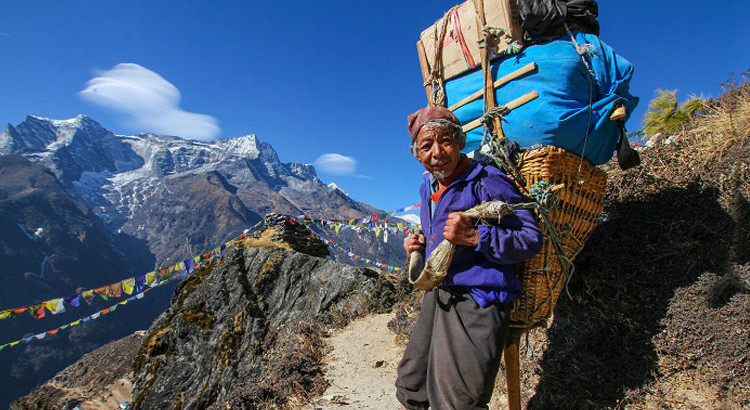 But what is a Sherpa and what do they do?

Sherpa’s are commonly known as people who live in the Himalayas and typically serve as porters on expeditions. They’re hired to carry goods and personal belonging up the mountains and to set up camps. These types of Sherpa’s are commonly found throughout EBC and ABC treks.

Then there are the more experienced Sherpa’s who are chosen to be part of an expedition team. They may be hired to guide climbers to base camps or high summit peaks. Other responsibilities might include fixing ropes or clearing routes.

What many people don’t know, however, is ‘Sherpa’ is the name of an ethnic group found in mountainous regions in the Himalayas. And people from these regions often have the surname Sherpa. So while they might be serving a Sherpa role, many also have ‘Sherpa’ as a last name.

Overall, mountain people know the Himalayas better than anyone else because they’ve lived in these remote, isolated environments their entire lives. While they might not possess a super power visible to the human eye, they certainlyare super at what they do and know the weather, landscape and environment better than any outsider or device. Their experience in the mountains isn’t solely based on expeditions and trekking tours to common places such as Everest Base Camp or Annapurna Base Camp; their experience is based on LIFE experience and this they’ve been accumulating since the day they were born.

So if you’re thinking of embarking on a trip to the mountains, I’d highly recommend the support and guidance of a local Sherpa. Even if you’ve read many blogs and articles online about how easy and cost effective it is to ‘do it yourself’, there’s no cost more valuable than that of a life.  If you have any questions about a particular trek or would like to know more about our expert Sherpa Team, contact us for details.

See you in the Mountains!