Discover Romania: Five Things to See when You Visit Carei

Carei (in Hungarian Nagykároly in German Großkarol) is a medieval market town in the north of Romania. Located close to the Hungarian border, the town is not necessarily a notable tourist attraction, but it’s well worth a visit, especially if you like history, architecture, nature, and tradition.

The best-known tourist attraction in Carei is the Károlyi Castle ensemble, the work of architect Arthur Meinig, a historical monument erected in 1892 – 1894. The castle is currently under restoration. The city museum of Carei is housed inside the palace complex. Besides learning about the history of the building and of the Károlyi family, you will also learn about this important geographical area of Romania, the influences of Ottoman culture under Ottoman occupation, local agriculture, and so on.

The museum exhibits tools, weapons, pottery and documents relating the history of Carei. A lot of the original furniture from the beginning of the XIX century has been carefully preserved inside the castle to allow visitors a glimpse into the lives and lifestyles of the local aristocracy from back then. The castle is surrounded by a beautiful garden that occupies 12 hectares, featuring a wide range of plants – 208 species and subspecies – including rare varieties. The park is a protected arboretum: the large plane tree in front of the castle with a diameter of 205 cm, was planted in 1810.

Antal Károlyi, or Feren Antal, a descendant of the Count Sándor Károlyi de Nagykároly, is the founder of the Church of St. Joseph Calasanz (pictured above) on August 22, 1779. Today, this church is one of the main religious landmarks of Carei. The construction of the tower clock of the church was funded by the widow of Count Károlyi József in 1803. In contrast, the Orthodox cathedral of the town, although quite imposing, is a recent construction – 1990-2007. It is a Byzantine-style edifice with three main bodies: altar, nave, and narthex. The frescoes that decorate the walls inside were made by contemporary painter Emil Stoica. Critics of the genre confirmed the great artistical value of the paintings. 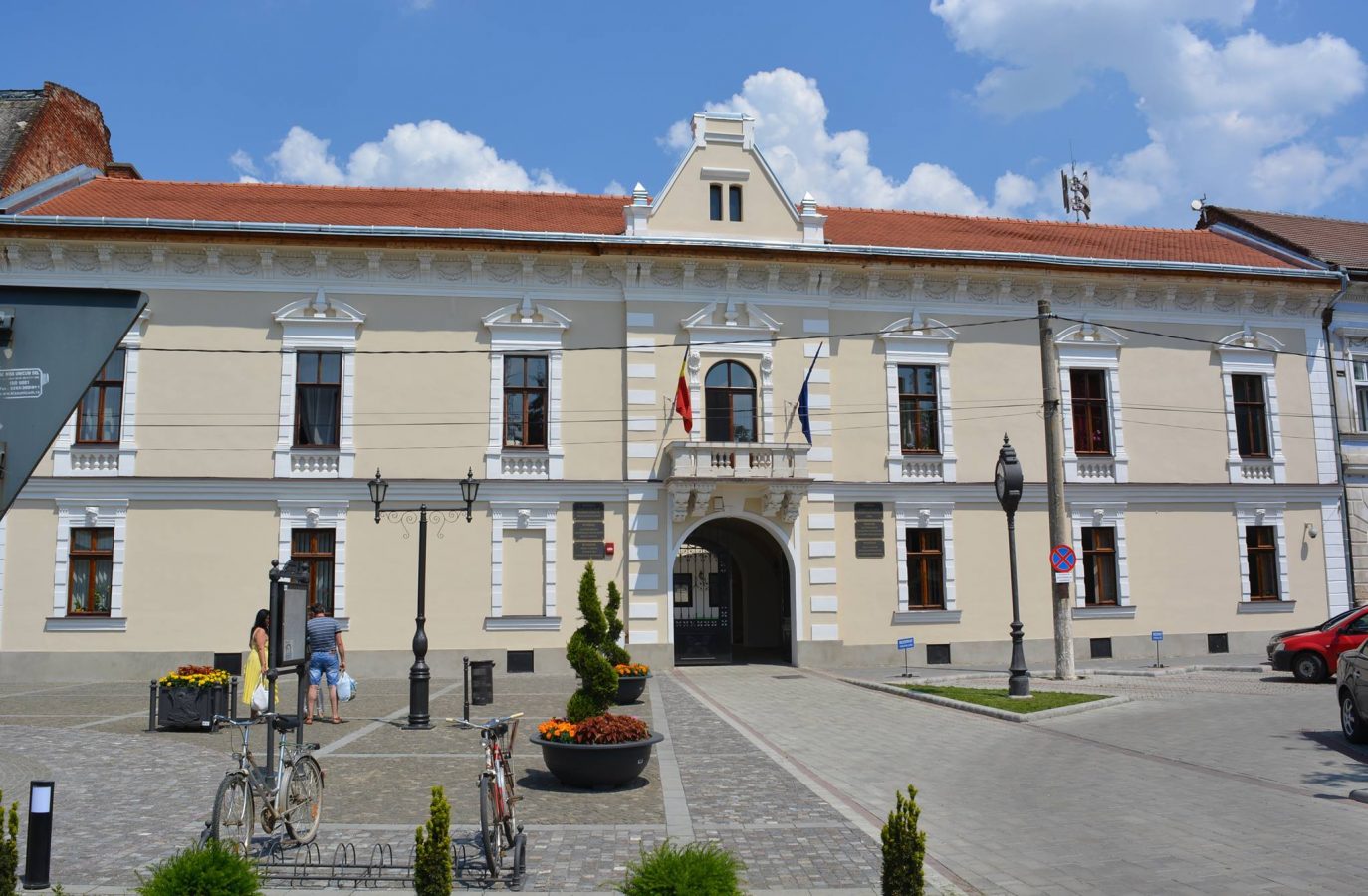 The Carei City Hall is another interesting architectural landmark of the town. The local government now occupies a building from 1910 – 1911, which once housed the headquarters of “Albina,” a local association. The city hall offers tourist information, as well as information on local events and festivals. Alternatively, you can visit Casa de Cultura Carei on Strada Culturii 12-14 – the main cultural institution of the city.

A day trip to Sato Mare is a must when you visit Carei. Satu Mare is the capital of Satu Mare County, naturally richer in attractions and things to do. It’s Administrative Palace, a brutalist-style landmark, is one of the tallest buildings in Romania, and the highest in Transylvania. Climb to the observation deck at the top for amazing views of the county. On a clear day you can see all the way up to Hungary.

Finally, continue driving from Satu Mare to Negrești-Oaș to visit the ethnographic museum. It is an outdoor museum that covers an area of circa 2 hectares. The museum boasts a permanent exhibition with a valuable collection of ethnographic and folk art, but also an exhibition of contemporary art. The most important open air exhibits at the museum include the traditional wooden church from the village Lechinţa dating from the early part of the seventeenth century; traditional homes from Racşa, Moişeni and Negreşti (centuries XVIII-XIX); plus several other buildings housing rich collections of fabrics, costumes, icons, ceramics, furniture, and tools.

:
Stay at L’Art Hotel – a contemporary chic boutique hotel with 16 rooms and suites, modernly equipped, cozy, and located in the heart of Carei.
Dine: Nostalgia Carei – a local restaurant serving Romanian menus, grilled meats, soups, pizzas, and more. There are several other restaurants and cafes in the same neighborhood, not far from the Károlyi Castle complex.