Desertification: The Very Real Threat to Cyprus and Crete

When Spring on Crete comes no more

Not all news from paradise is positive these days as unsustainable practices and the global warming trend threatens to turn Cyprus and other southern European islands into true desert islands. New concerns over Cyprus’ very limited water resources come from Cyprus’s Ministry of Agriculture, Natural Resources and the Environment, which has set up a national action plan to combat desertification. But will this be enough?

Since the mid-1960’s Cyprus has had escalating water usage problems. Urbanization and the increase groundwater use combined with dam projects, exacerbate the problem of ever-decreasing rainfall on the once lush island paradise. Multi-year droughts and longer hotter summers have only served to magnify what was always unsustainable growth. Cyprus was an arid place, to begin with, but the spike in tourism and agricultural use of water resources now threaten to transform the island according to experts. Agriculture Minister Nicos Kouyialis told Kathimerini Cyprus in June, as much as “57 percent of the island is in immediate danger of desertification and 42.3 percent is considered at moderate risk.” Agriculture Ministry’s new action plan focuses on 17 points. These include identifying the moisture carrying capacity of grazing areas, incentives for the maintenance of terraces and drylands for soil retention, measures to enhance traditional farming activities, land use control in critical areas, and the introduction of incentives to control and reduce water consumption.

But the Agriculture Ministry has an action plan to set in place, one which focuses identifying the moisture carrying capacity of grazing areas, incentives for the maintenance of terraces and drylands for soil retention, measures to enhance traditional farming activities, land use control in critical areas, and the introduction of incentives to control and reduce water consumption. 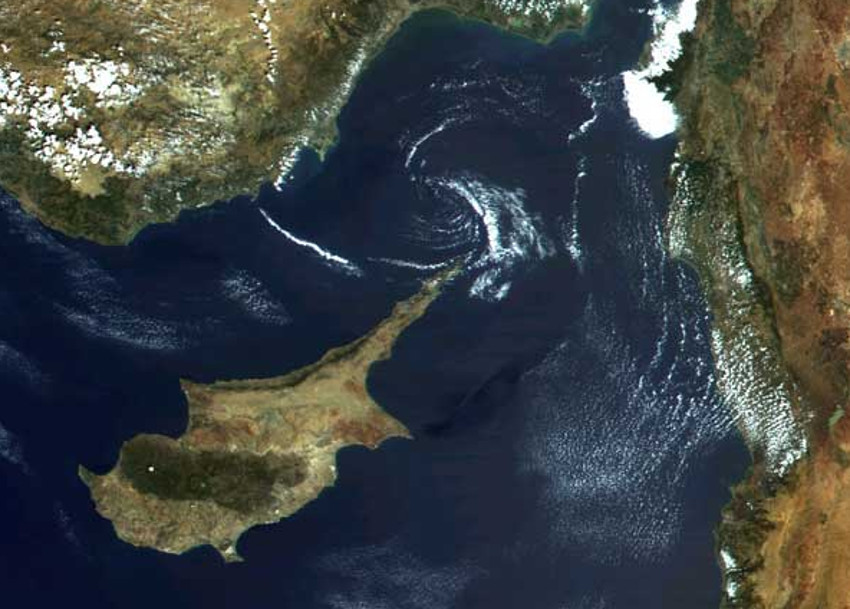 The disturbing news is not just for Cyprus. Parts of many other countries in the Mediterranean basin, including Greece, have also been deemed to be at high risk of desertification. And out beloved island of Crete, particularly east of Iraklio, due to adverse bioclimatic, hydrological and terrestrial conditions, is threatened as well. Eastern Crete is joined by western Lesvos, the Cyclades islands, the Kilkis region of northern Greece and the hills of central Thessaly as well.

Furthermore, the Bank of Greece estimates the effects of climate change will cost the country 123 billion euros by the year 2100. A committee tasked with studying the macroeconomic cost of climate change has been set up by the central bank and estimates such costs will account for 1.5 percent of the country’s GDP between 2025 and 2050, 0.9 percent between 2051 and 2070 and 0.1 percent beyond 2070.

Water stress in the Mediterranean basin 2013

“Desertification, or “land degradation in arid, semi-arid and dry subhumid areas, resulting from climatic variations and human activities” (UN-CCD 1994) has been known to the people of the Mediterranean Europe and has been of concern since ancient times. Writers such as Solon, Plato, Theophrastus, Cicero, Pliny and Lucretius described land degradation and were aware of its consequences, but the degree of awareness has been uneven through the historical periods (Rubio 1995).” 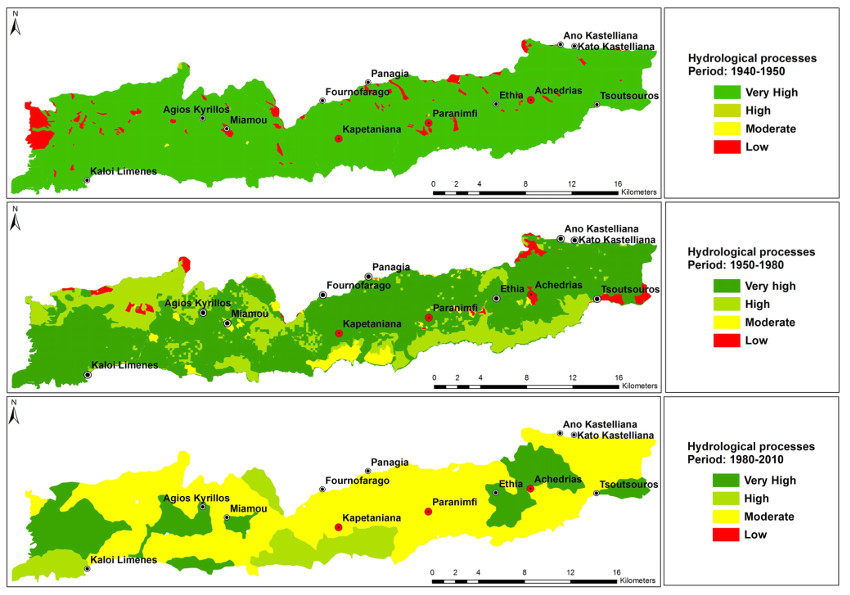 Here on Crete, the landscape is particularly vulnerable because of the slope of the land and the soil makeup, and because of the land use projections to come. A new resort near Sitia in the east immediately comes to mind. We reported previously about Minoan Group and the Itanos Gaia Project, which is certain to alter water and land usage profiles in this delicate area of the island. Before long downward pressure owing to the economic need for increased tourism on these islands is going to be an acute problem. Citing the Greek study, we find a certain negative future if interested parties do not intervene:

“In Mediterranean Europe, desertification processes are activated and accelerated only when, in addition to climatic limitations, other land parameters are driven beyond critical thresholds by human action (e.g. Archer and Stokes 2000). Therefore, the phenomenon is spatially and temporally discontinuous.”

It’s high time citizens of these delicate island ecosystems raise their voices for future generations. Crete and Cyprus, Rhodes and many other island communities depend on both tourism and agriculture for survival. Let’s face it, not many travelers covet the idea of holidays on dried up rocks in the sea. And people living in paradise cannot be wishful of fruit trees and vegetable gardens disappearing forever.

Cyprus Officials Upbeat Over Tourist Flows from Russia in 2022
What If the Secrets of Keftiu Could Rescue Humanity’s Future?
Odd Christmas Traditions Around the World
The Connectedness of Beauty: A Secret of Crete Few People Know
Previous: In Search of Original Greece: Folegandros Island
Next: Chubb Launches Innovative Travel App for Business Travellers