Travel experts claim Folegandros is the last bastion of what the true Greece looked like decades ago. The 32 sq. km. island near Santorini is home to about 650 permanent residents, and it’s a spot the big cruise ships just pass on by on the way to more highly publicized Greek isles. possibly the last untouched piece of true Greece.

The small island in the shadow of pop-star Santorini, Folegandros is a gem in the sparkling seas at the southern end of the Cyclades only accessible by ferry. Like it’s larger and more famous cousin, this magnificent island has its own caldera and sunsets that match those from Oia on Santorini. Everything here is genuine, more like the original Greek island experience, from taverns to the village people who so seldom see the flocks of tourists flooding other Greek isles.The island’s Instagram best reveals a little known paradise on Earth.

Folegandros beaches are unbelievable in their beauty, an in their inaccessibility. A long walk or boat trip are the usual methods for dedicated beachcombers, but there are two stretches of sand accessible by car. You can drive to either Karavostasi and Angali, which is one of the nices beaches in the Mediterranean. The good news is, walking this island is nothing but a joy of perfumed nature, solitude and silence, and the rich flavors of caper flowers, thyme, and oregano. 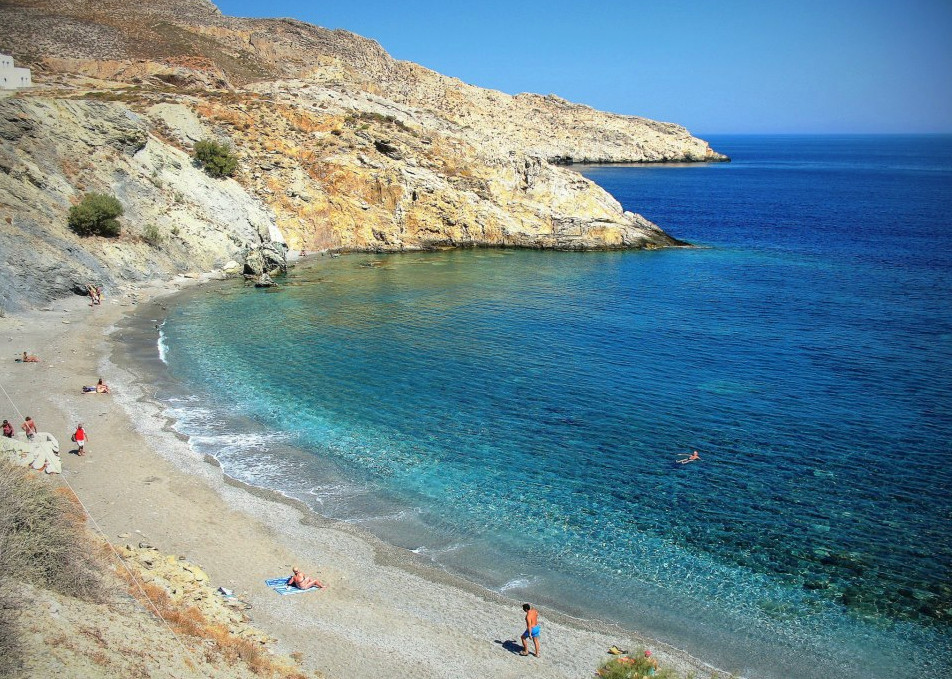 Three tiny villages dot the mountainous landscape of Folegandros, and instead of luxury resorts, visitors find apartments and a few villas for rent. For authentic Greece, unencumbered by rampant commercialism or even economic depressions, Folegandros is for people in search of authentic Aegean paradise away from the crowd.

How to reach the island:
Folegandros is a main stop for the ferry lines from Piraeus, Milos, and Santorini. The island is also accessible via frequent ferries or hydrofoils to Paros, Mykonos, Ios and the near Sikinos. Most distant travelers fly into Santorini and take a ferry from there.

Island transport:
Most visitors to the island make use of the bus lines, which will deliver you to the port or to the various unpaved roads that lead to the beaches. Car and moto scooters are rented, and the remote beaches can be reached by little fishing boats depart daily form the port of Karavostasis.

On Folegandros, there are hotels and rooms for rent at Karavostasi, in the Chora, Agali and in Ano Meria. Suggested hotel digs from Argo include: Blue Sand Boutique Hotel and Suites at Agali Bay, which offers chic and classy sea view rooms and suites;  Provalma Studios, which afford a kind of budget friendly and spectacular view of the caldera and the Santorini-ish sunsets; and an array of charming homes and apartments listed via Airbnb like this 17th century mansion at Castro.

No matter where you decide to stay you’ll certainly see the Greek isles in a melancholy and retro way. This is getting away from it all, and taking in the whole experience of Greece.