Eastern Europe remains something of an unknown quantity for us in the West. Though the Soviet veil has long been lifted, though many Eastern European countries are now in the EU, some even in the euro, though Euro 2012 shone the spotlight on Ukraine and Poland, and though travel is becoming more and more democratized, many of us still feel there is something deliciously alien about Eastern Europe.

Locals are used to seeing shock on the faces of uninitiated tourists walking down Monte Casino Street in the Polish town of Sopot. Right in the middle of two normal buildings sags a warped, curved building. Is it melting? Is it just exhausted? Is it drunk? Who knows? It’s the “Krzwy Domek”, or Crooked House. Built in 2004, it was designed by Szotynscy Zaleski, who was inspired by the fairytale artwork of Jan Marcin Szancer and Per Dahlberg. A casual look at Dahlberg’s work reveals an obstinate refusal to draw a straight line, instead rendering fantastical, twisted fairytale castles. The Crooked House is actually a fully functioning shopping centre with a nightclub upstairs fittingly called “The Dream Club.” 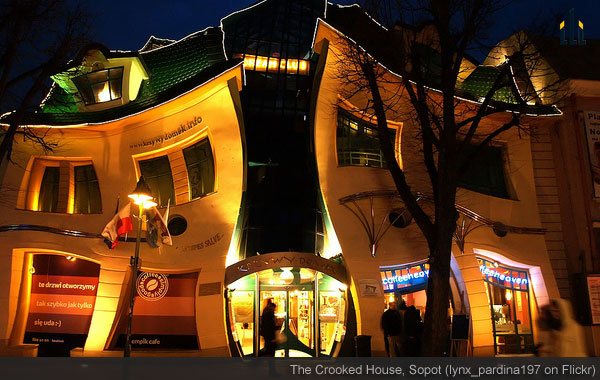 The Sedlec Ossuary is a small chapel in the suburb of Sedlec. It is situated under the Cemetary Church of All Saints, with both built in 1400. What sets the Sedlec Ossuary apart from other churches, however, is the skeletons of between 40,000 and 70,000 people which it contains. An underground chapel with up to 70,000 skeletons is creepy enough, I think you’ll agree, but wait! There’s more! Many of the bones have been arranged by the world’s most ghoulish interior designer to make decorations and furniture for the chapel. The highlight-using that term loosely- is the chandelier made from bones hanging from the ceiling, draped with strings of skulls for good measure. The woodcarver employed to tidy up the bones clearly knew his biology; the chandelier is said to contain at least one of every single bone in the human body. 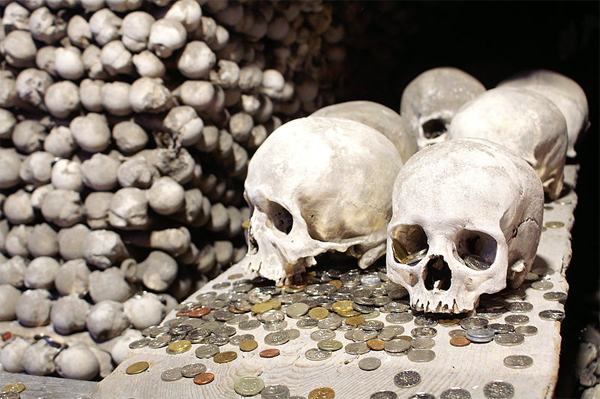 What is so unusual about bunkers? How about 24 bunkers for every square kilometre of the entire country of Albania? During his 40-year tenure holding reins of Albania, slightly bonkers and overly paranoid leader Envers Hoxha presided over a programme of “bunkerisation”, building over 700,000 bunkers, or one for every four of the population. Not for Hoxha the run-of-the-mill, standard locations either- bunkers were built in every conceivable place, from street corners to hotel gardens to graveyards to playgrounds to beaches to. The bunkers dot the landscape as far as the eye can see, making adventure tours in Albania a unique and fascinating proposition. It’s almost alien looking, with many of the bunkers in peculiar over-sized mushroom shapes. The Albanian people have resigned themselves to the ubiquity of the bunkers- which were largely useless when they were built and are more useless now- by creating a flourishing line of bunker related tourist souvenirs.

The Hill of Crosses, near the town of Siauliai, is a symbol of poor Lithuania’s battered and bruised history and a testament to the indomitable spirit of humankind in the face of opprsession.  This small country was taken over time and time again down the centuries, its location smack bang between Russia and Europe making it a sitting duck. Lithuania was absorbed into the Russian Empire in 1795, and it is thought that the crosses started appearing then, in remembrance of Lithuanian rebels. The crosses continued to be added during rebellions in 1831, 1836, and when the Russian Empire fell asunder in 1918. Next came Soviet occupation from 1944-1990, where still more crosses were added, now with the duel function of remembering the dead and as a symbol of the desire for independence. Despite being bulldozed three times during Soviet occupation, there is now at least 50,000 crosses on the hill, with some estimates closer to 100,000. 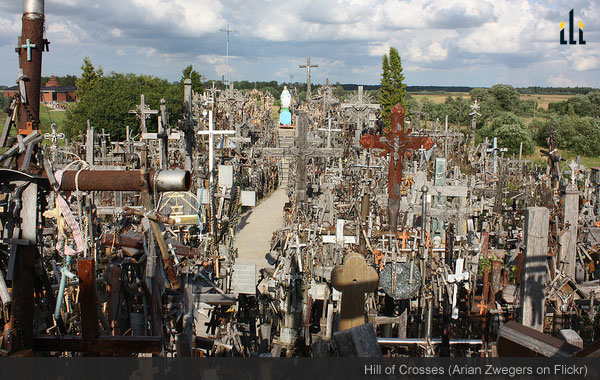 Another crooked entry from Poland now, with the mysterious Crooked Forest. What we do know: In the 1930s, a group of about 400 trees were planted near the town of Gryfino. Something warped their growth, causing them to grow horizontally for a certain number of years, all in the same direction. At some point, the trees righted themselves, all at the same time, and began growing upwards again. You could embark on a dozen guided walking holidays, anywhere in the world, and never come across a sight as strange as this, dozens of uniformly bent trees, as if on their knees in prayer. Mundane natural explanations concerning erosion, soil type and light have been posited, but many now believe that it was human activity. Nobody has any idea how or why, speculating a mind as warped as the trees themselves. The Crooked Forest isn’t signposted; Just ask the way to “Krzwy Las”- if you dare! 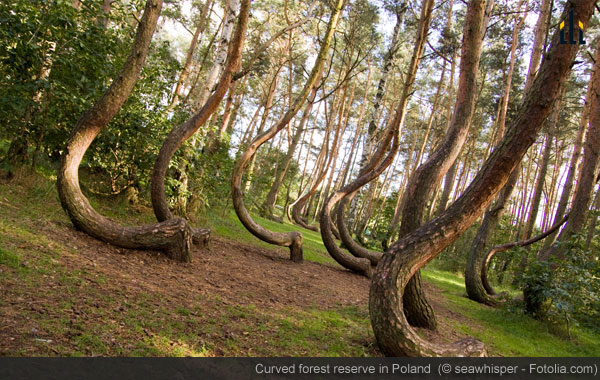 Laura thinks that Europe is the best continent for walking holidays, with the perfect mix of climate and scenery.