Southeast European nations are at risk of a major financial meltdown, should the Greek debt crisis result in that country deciding to pull out of the Euro, a leading economist has warned. The chief economist for the European Bank for Reconstruction and Development has urged nations in South Eastern Europe to step up efforts to protect themselves from any possible fallout. 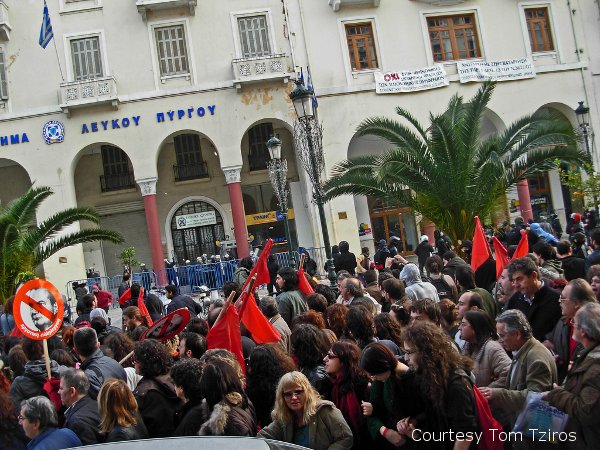 Erik Berglof said that although “there are measures in place”, Bulgaria, Romania and Serbia especially should “erect a ring of defence” in order to help them cope better with the crisis.

“We don’t speak about it much, but… in these times of crisis one has to understand the importance of financial stability,” a worried Berglof told Balkans.com.

The problem facing Southeastern Europe is that the economies of nations such as Albania, Bulgaria, Macedonia, Romania and Serbia are burdened with an enormous Greek presence. Bulgaria alone has an estimated 24% of its national assets locked away in Greek bank vaults, not to mention as much as 20% of its bad loans.

The potential for disaster is further outlined by the World Bank, which revealed that Greek banks still possess foreign claims totaling some $69 billion throughout the region, despite offloading more than $8.5 billion worth of such claims over the last year. These claims include foreign and domestic currency lending, and cross-border lending through subsidiaries.

Research consultancy Capital Economics has also warned of the risks facing Bulgaria and Croatia, whose banks it says are the most heavily dependent on short-term lines of credit from banks inside the Eurozone. This financing is being gradually withdrawn, but the danger lies in the possibility of a more sudden withdrawal, which remains a real threat given these countries banking sector links to troubled Greece and Italy.

“If this scenario does materialise, both economies face a severe domestic credit crunch that could knock some 1.5-2.0% off their GDP. In the worst case, both could be forced to turn to the International Monetary Fund for help.”

The region is already feeling the effects of Europe’s credit crunch. Trade between Balkan nations and the Eurozone has slumped quite dramatically in the last couple of years, and of all countries in the region, only Bulgaria managed to post economic growth this year (less than 1%).  The tattered economies of its neighbours Croatia, Romania, Serbia and Slovenia, meanwhile, have all contracted this year.

Further exacerbating these problems is the region’s continuing dependence on trade with troubled nations Italy and Greece. In Bulgaria and Croatia, exports to Italy account for almost 4% of GDP, while another 3.5% of Bulgaria’s GDP is generated from Greek exports.

Trouble is also brewing in Romania.  Despite possessing the largest economy in the Balkans, it faces the additional problem of political instability after its government collapsed back in May. While new elections have been scheduled to take place later this year, by the time these actually take place (in November), it’s likely that the Romanian economy will have contracted even further. As it is, without a strong government in place, any efforts to stem Romania’s economic slowdown are paralyzed by political infighting.

Capital Economics said that it fears the Romanian economy is the most vulnerable of all in the region, especially if the worst should happen and Greece withdraws from the Euro. due to the massive trade and financial links between the two countries.

Ziarul Financiar, a popular Romanian business newspaper, warns of a desperate situation should Greece decide to exit the Euro. Given the massive trade and financial links between the two nations, a Greek exit from Europe is likely to see the Romanian leu depreciate against the Euro by a whopping 15%.  Such a staggering collapse would cause interest rates in the country to double virtually overnight, leading to a nightmare scenario in a country where almost two thirds of its debt is denominated in foreign currencies. The result would be something of a vicious cycle, with the leu depreciating further, hitting domestic demand and further denting local industry.

Of course, Romanians are not oblivious to the problem – interim Prime Minister Victor Ponta himself has admitted that he hopes Greece will stick it out and remain in the Eurozone, and with good reason – given the powerlessness of the country’s politicians at present, such a disaster could hardly happen at a worse time than now.