As the whole human rights, rights to privacy, and free visa situation heats up, the EU Commission has to play arbiter for relations with the so-called “third countries” outside Schengen and Europe. 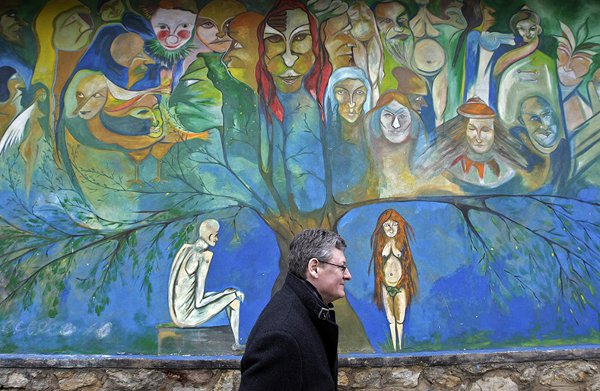 According to the news from EurActive, the Commission got a letter from interior ministers in the Austria, Germany, the Netherlands, and the UK warning of cities under considerable “strain” where immigration from EU member states is concerned. In that report Romania and Bulgaria are indicated as likely targets of these ministers’ allegations. The letter, addressed to EU commissioners; Cecilia Malmström (Home Affairs), László Andor (Employment and Social Affairs – picture top in Hungary recently) and Viviane Reding (Justice and Fundamental Rights – pictured just above), reportedly focuses on the Roma people and so called schemes to rob the social benefits coffers of these nations. But to quote Andor above for one, it seems more manifest to include rather than exclude people:

“Tackling the economic and social consequences of the crisis must be Europe’s top priority. We need to find a balanced way out of the current turmoil and help get people back into work. This cannot become the lost decade.” 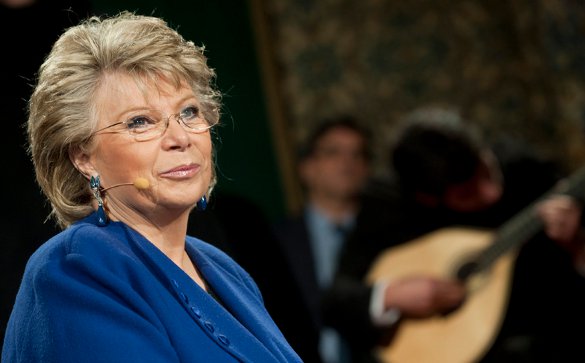 Conversely, the EU Commission says they have never received any documentation showing the number of “foreigners” claiming benefits from these countries. Interestingly, the EU Home Affairs section was just in the news last week concerning a vote to nix the use of passenger data in what amounts to a profiling of migrants and tourists entering the EU and the Schengen area.

Apparently a battle may soon rage within the EU over such key disputed areas as; privacy, human rights, member and non-member affairs, and especially how the Europe is disposed toward itself. The longstanding free visa debacle between EU and Schengen states and Russia, and continual bad PR and relations for Turkey, Georgia, Romania, and Bulgaria, plus many other states,  these and more trending conflict seems to imperil the affairs of all concerned. 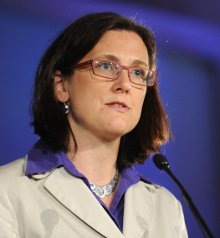 Isolated cases of overzealous profiling, the institution of the Schengen Information System version II, the creation of still more bureaucracy devoted to bio-metric and other profiling systems analysis, and the general negative press over Roma and so called “third countries”, everything around the migration and travel situation in Europe is overshadowed now with doubt and mistrust. Some UK, German, and other press outlets continually fuel fires of a feared disaster where Roma migration is concerned. In line with this, the lack of uniformity where even casual travel to and from European nations is concerned is simply daunting.

Each EU member state has sometimes vastly different laws and procedures here. At the forefront of these issues, Home Affairs chief Cecilia Malmström (above left)  heralded the most dynamic and far reaching positive change to refugee and migratory law in the EU via a blog post on her personal blog last month, and I quote with regard to the recent European Parliament Committee on Civil Liberties (LIBE) and new asylum laws :

“This is a success that will lead to it becoming the order of the EU Member States’ asylum systems, the individual applicant will be guaranteed rights such as interpreter, legal counsel and the right to know within a certain time, and that there will be a special aid to the most vulnerable refugees, as unaccompanied minors, women who are victims of sexual abuse and torture injured. At all points, it is a standard search against current regulations.”

A recent report (PDF) by the National Institute of Social and Economic Research reveals a more mundane impact for Britain from supposed Roma migration and abuse if borders there are relaxed. With respect to Romanian specific migration, the report clearly shows the UK is not at all targeted, and Germany is a lesser attractive destination compared with southern Europe destinations like Spain and Italy. It should be noted here too, that Romania is a Latin language country, as are Spain and Italy, with Portugal and France as well. Quoting directly from the report:

“The main destination countries of Bulgarian and Romanian migration are Southern European countries, and to a lesser extent Germany (see figure 2.2) Countries favoured by Romanians are Italy and Spain which in 2009 attracted about 40 and 43 per cent of mobile Romanians respectively. With regard to migration from Bulgaria, Spain is a clear favourite, with around 38 per cent of Bulgarians choosing to migrate there.”

Weighing all the factors involved, it seems clear for many that politically motivated and other economical motivations play some role in these allegations and fear mongering with regard to some peoples and nations. Despite fears that the aged, unemployable, and unemployed might swarm to the UK, Germany, Austria, the Netherlands and other countries, the figures show no such calculable risk. Most Romanian and Bulgarian “movers” about Europe to be employed and employable young people.

Finally, anyone reading news such as this piece from Switzerland might justifiably fear for not only Roma migration, but North Africans, Tunisia, Algeria, Morocco, Romania, Georgia, ex-Yugoslavia and essentialy all of eastern Europe. The story actually reports;

“Some parties are calling for urgent measures like DNA profiling. swissinfo.ch looks at those said to be behind the rise.”

Citing the so-called “Foreign Nationals Act”, the specified report is actually quite broad and subjective with regard to isolating foreign nationals as a rising element of concern criminally. On the one hand the text of the swissinfo.ch article is confusing where the percentages of penal code violations goes, “three fourths” of a “Swiss Crime Wave” is loosely attributed to asylum seekers, or at least any reader might assume this from the way the story is framed. Despite the facts presented by these kinds of articles, the fear they mitigate is none the less harmful PR and international relations wise.

All the while the “free visa” situation in Europe seems to be escalating into a wholly more critical impasse in between EU states. In the news from France only hours ago, officials there stopped a train carrying some North African asylum seekers possessing visas from passing in between Italy, and France. The Business Recorder story shows clearly how the whole migration-travel situation in between inter-European and pan-European nations could well get completely out of hand. 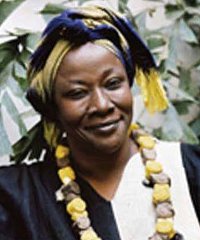 Another story on Connectionivoirienne.net just reported a case where France not only refused in April the renewal of Schengen visa for Malianauthor, politician, and political activist Aminata Traore (at right), but asked other Schengen area countries to refuse her also. It is important to note here, Traore is an activist who has broken no laws in France, Germany, or anyplace else we are aware of.

The significance of higher and higher profile stories of visa and migration friction, these kinds of political movements do nothing to further good relations, let along inter-operative travel in between nations. What once appeared as opposition to Russians visiting the EU unabated, has clearly become a case of exclusionism for a much wider list of “undesireables”, at least this is the way the EU’s member ministries may be judged. As László Andor so aptly puts it, “this cannot be called the lost decade”, the effect would simply be too costly.

We will offer more as the stories progress.