A poll taken last month in Estonia reveals the serious impact the Russia sanctions are having on tourism businesses there. According to the poll, the counter sanctions by Russia’s Putin have affected one in five businesses there. Russian tourists represent a big percentage of Estonia travelers, and many fear increased tensions will gut the travel trade there.

The Estonian Chamber of Commerce conducted a poll which showed Russia’s sanctions have had a direct negative impact on over 30 of the 153 polled companies. However negative these impacts may be, it’s interesting to note some businesses have seen a rise in trade with Russia. Such industries as logistics and transport have been affected negatively, for obvious reasons. Outside the agricultural sector, businesses that can supply Russia with products now unavailable from Ukraine have seen a rise in trade. 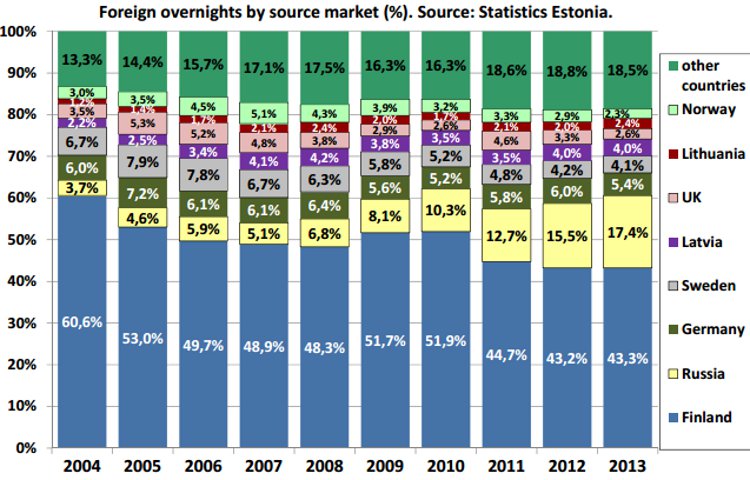 Half the businesses polled said the Russia sanctions have had no direct impact. As for tourism, the biggest concern is tension between Russia and other European nations, Estonia being a transit point, one likely to feel the pain of negative tourism through its borders. Russians represent almost 16% (PDF) of all overnight stays in Estonia. Tallinn would bear the brunt of any such curtailment in inbound tourism. While Germans to Tallinn have decreased these last few years, Russian stays there increased by over 14%.

Finally, when the trickle down effect of these sanctions his populations in countries like Finland (see above), further impacts on Estonia and others will be felt. Finland represents the largest travel demographic for Estonia, and already the Finns are feeling the punch from sanction, on counter sanction. So far Russia’s response to the most recent round has not even been announced, but the US/EU sanctions aimed at big oil are already under heavy scrutiny. Russia now has options like restricting air space for airliners, impeding natural gas and other flows of goods, and other counter moves.