An Encounter with the Spirit of Eileithyia at Tsoutsouras

The birth of Athena from the head of Zeus, with Eileithyia on the right. CC Eileithyia or Ilithyia

The birth of Athena from the head of Zeus, with Eileithyia on the right. CC

Argo is on a mission now, a mission to introduce the world to the most beautiful and mysterious island in the Mediterranean Sea. Crete is a modern day beach party built on top of Europe’s most ancient civilization. For those out there who have never been, here’s a first in an endless series of stories about the local destinations and customs that make this Greek island unique.

What if I told you about an isolated beach all children love, and one where tourists seldom go for fear of a mountain pass? In the South of Crete there’s a little village on the sea called Tsoutsouras. It’s a sparkling and shiny little place where people go swimming in its “medicinal” waters, and where echoes of ancient cults and rites abound. Built on the ruins of the ancient Minoan city of Inatos,  Tsoutsouras is only 63 km south of the capital of Heraklion. But for most tourists, it may as well be on the moon. Our first trip to the village at the invitation of our wonderful friends Minas and his wife Kallia revealed many wonders, as well as the “myth” the place is so hard to reach. It’s true the last 9 km of the trip from Heraklion takes visitors across a high mountain pass, and I’ll admit parts of the road make one fear for his life, but only the high winds at the summit promise any real danger. If you’re willing to sacrifice a little adrenaline for a magnificent panorama of the Libyan Sea, then you’re all set to go to Tsoutsouras. 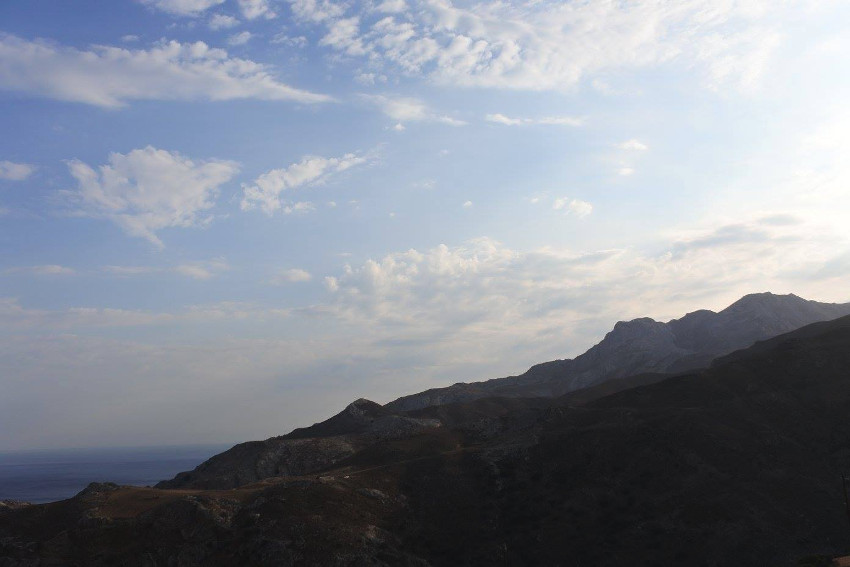 The approach to Tsoutsouras affords magnificent views adn some thrills too

The quaint harbor, marina, and the shallow waters of the sandy beach of Tsoutsouras were packed the day Minas and Kallia(pictured below) showed me, Paul, and Mihaela this hidden wonder. But the beach-combers and water sports enthusiasts we found were all Greek. Families and old folks, yachtsmen and jet skiers provided a vivid human backdrop for a geographic spot most Crete visitors could not find if paid to do so.  Even though the beach and the intense archaeological interest here has made the place famous, the trek there is just that “out of the way” by most people’s standards. But what gives Tsoutsouras its special aura is its connection to various myths and stories about Greek gods, Minoan religious rites, dragons, secret excavations, and especially rumors of the unique technological importance from the Minoan period. Added to this intrigue are the special characteristics of the sea water here. Particularly high levels of salt and iodine in the water add a therapeutic effect I truly believe exists. After having swum in the uncommonly cool waters offshore, I felt the pain from a football injury years ago dissipate. 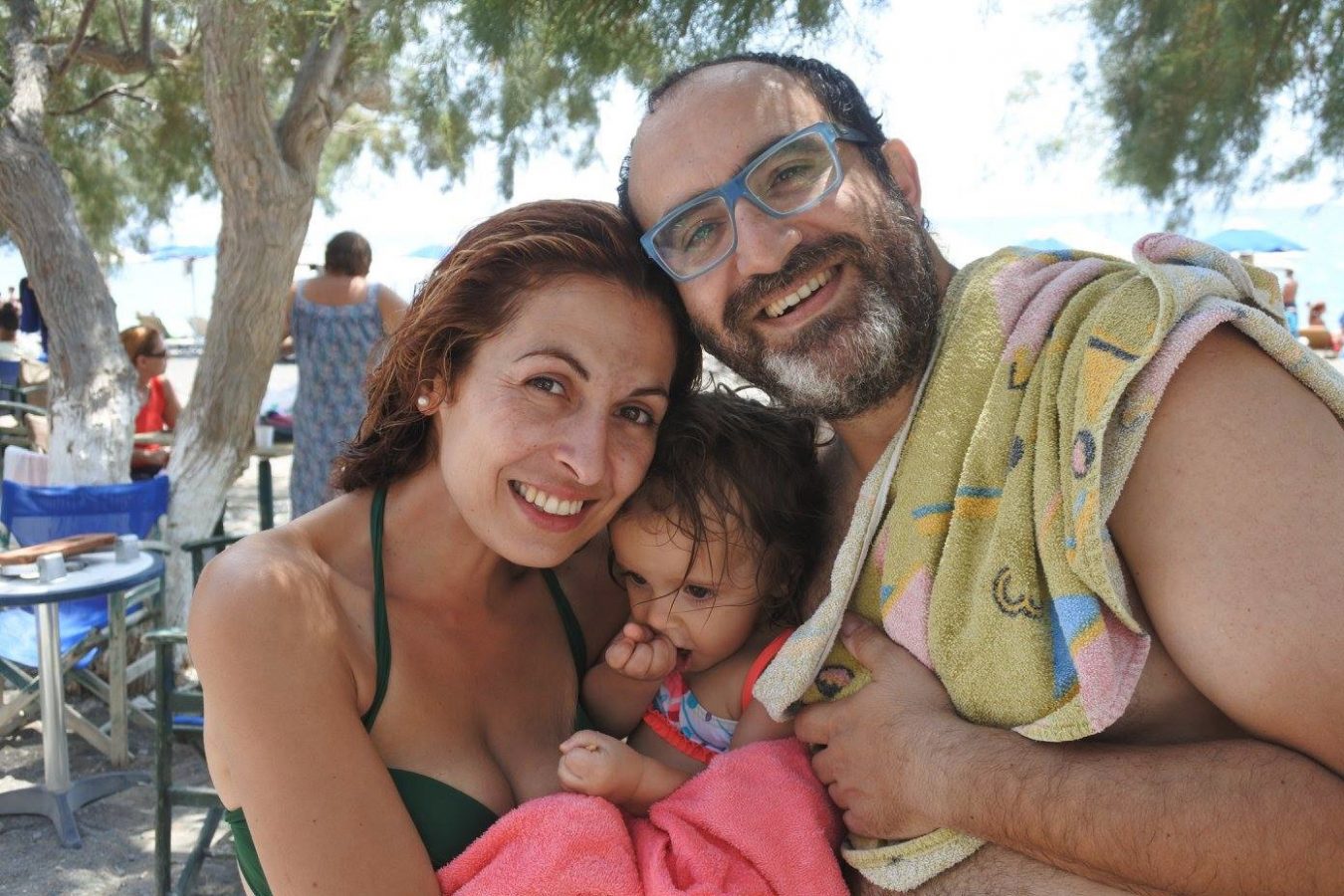 Our wonderful friends Kalli, Minas, and their adorable Anna Maria at Tsoutsouras Beach

The picture perfect landscape of Tsoutsouras and mighty Zeus’ face in the mountain overlooking in the background provide a superb photo op and unbelievable atmosphere. But the soul of Tsoutsouras’ appeal is something much more ethereal and spiritual I realize. I first realized this “special” character when our hosts, Kallia’s parents greeted us with such calm and charm. Nik, Kallia’s father, had built a stunning refuge overlooking the sea and the town over the years, and I’ll admit the impossibility of describing the place to you here. Calm, kindness, nurturing and utter serenity takes me part way to expressing the place and the people. The feeling made me research Inatos a bit. 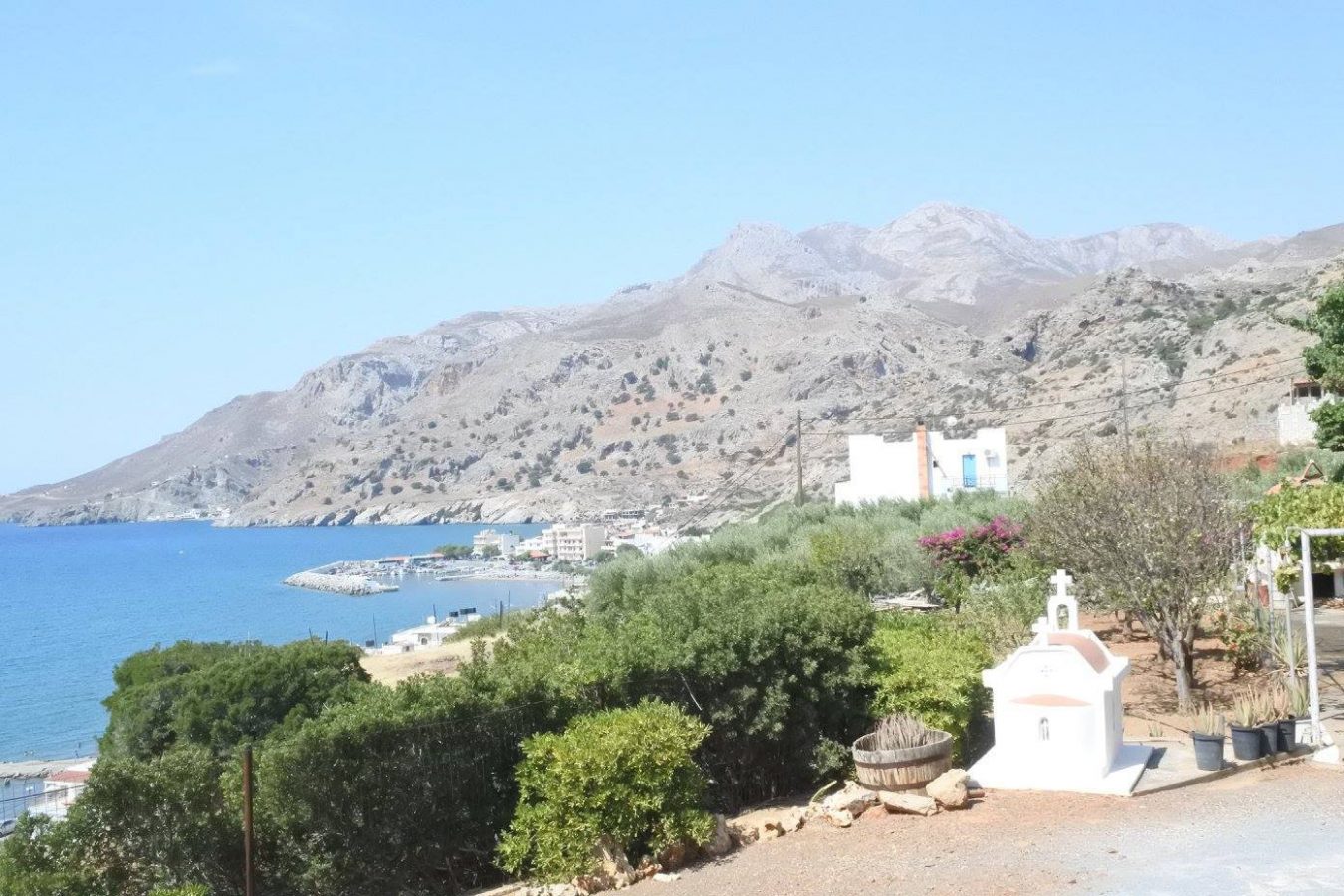 While little is know of Inatos when it was the port of Priansos, archaeological finds do tell us a bit about the importance of the place. All over Crete there are peak sanctuaries where the ancients and later civilizations worshipped deities. On of the most famous is right in Tsoutsouras, the sacred cave of  Eileithyia, a place where the Minoans gave offerings to the goddess of childbirth. Now I am convinced this “spirit” still exists in the area around the village. And perhaps this is the reason I could not drag my little boy Paul Jules from the water that day. Looking back on his natural experience at that beach, a piece of a funny litle puzzle falls into place. As we all sat underneath the cool share of a Cyprus tree on the beach that day, Paul stayed and stayed in the cool clear waters as if drawn there. Sure, kids love to play at the beach, but hours wading and splashing with no reprieve? Legendary mysterious mitosis or not, the spirit of Eileithyia lives in our friends too. Kallia’s whole family exuded the most comforting and nurturing spirit with not just our child, but with the exceeding care toward Minas’ and Kallia’s little daughter Anna Maria.

“Goddess of childbirth, Eileithyia, maid to the throne of the deep-thinking Moirai, child of all-powerful Hera, hear my song.” 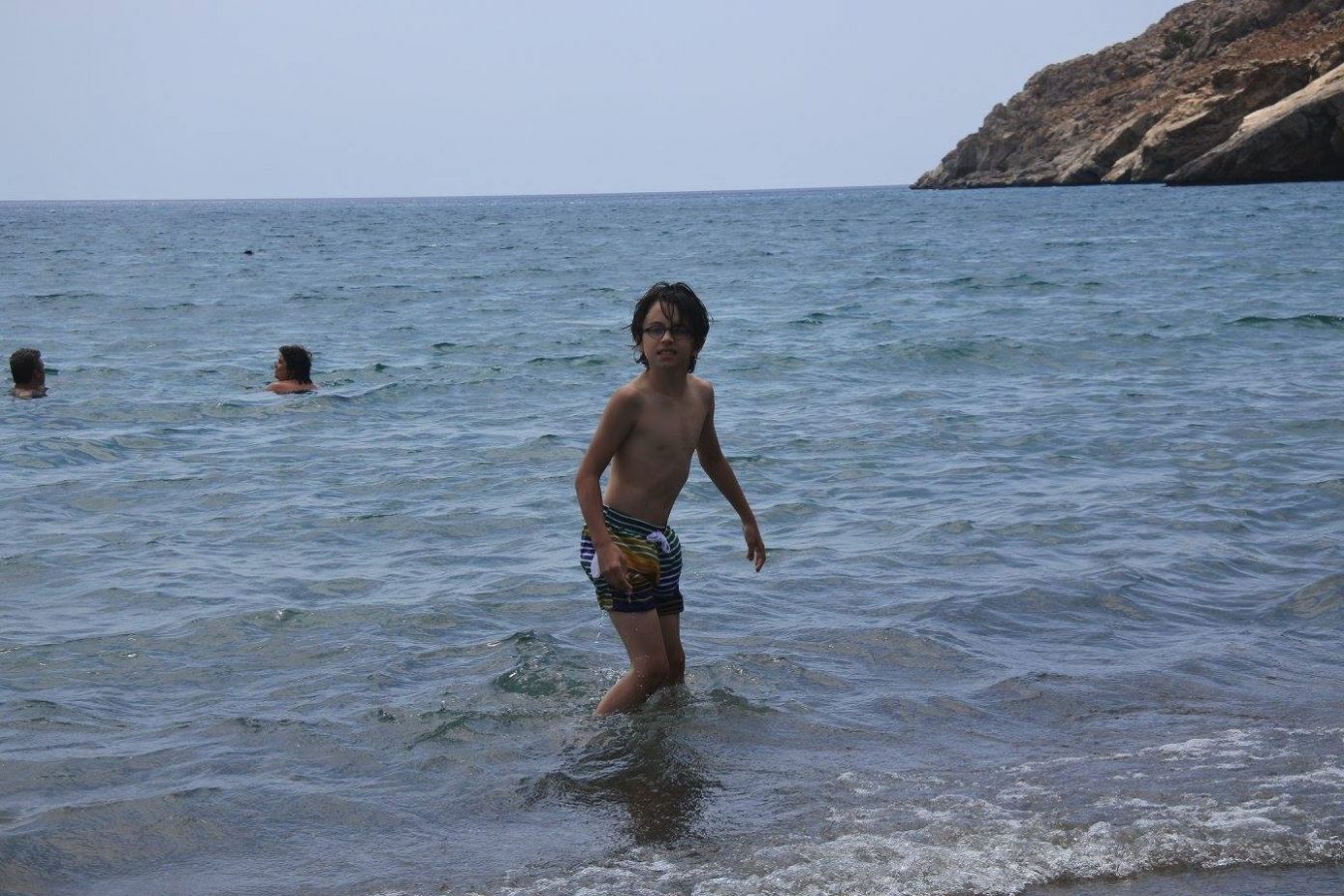 On this “special character” of Tsoutsouras, don’t take my word alone, many other writers and tour guides speak of the place as a spot kids will love. On another interesting note, the locals call the mountain west of Tsoutsouras, due to their shape that looks like a human figure. With this I can attest, it does feel like someone is always watching there. That’s fuel for another tale, but I’ve heard it said Crete has this special “protective” spirit about it. Also, the small beach in the old part of Tsoutsouras is but one of a series of pristine beaches in this part of Crete along the Libyan Sea. Minas told us of numberous interesting spots to the East accessible by road and/or boat.

Freshwater “Miracles” of Crete Island
Karpathos Makes National Geographic 2023 Most Impressive List
Crete is Becoming a Top Winter Refuge and Remote Working Destination
The Keftiu: Were They Absorbed and Erased from History?
Previous: Santorini Experience Comes to Oia and Fira in October
Next: Perfect Crete, Perfect Saganaki, and a 626 All Day Hamburger Surprise