The Croatian Dream project on the Adriatic

The outlook for growth in the hospitality industry in Eastern Europe is bright when looked at from the hotel investment angle. Judging from the number of projects slated for completion before the end of 2018, new hotels from Budapest to Dubrovnik will be cropping up across the region.

A recent report from TopHotelProjects frames Central and Eastern Europe very positively in relation to the number and scope of hospitality projects in the works. According to the report, over 130 hotel construction projects will be done by late 2018. Overall there are over 220 ongoing hotel developments in the pipeline in the 17 countries usually considered “Eastern Europe” or: Albania, Austria, Belarus, Bosnia-Herzegovina, Bulgaria, Croatia, the Czech Republic, Hungary, Macedonia, Moldova, Montenegro, Poland, Romania, Serbia, Slovakia, Slovenia, and the Ukraine. 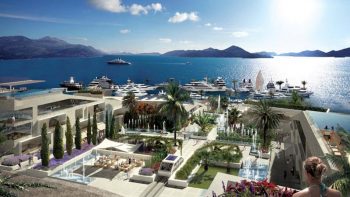 One aspect of the Dubrovnik Pearl project of Croatian Dream

Among these countries, Poland leads in the total number of projects with 37 projects, followed by Croatia with 27 projects, and Austria with 21. The TopHotelProjects report shows Hampton (10), IInterContinental (7), and Park Inn (6) as the most active hotel brands with ongoing projects. Hotels listed in the TopHotelProjects report included; Dubrovnik Pearl Hotel and the W Budapest on Andrassy Avenue. On the Croatian hotel, this became big news when Malaysia billionaire Vincent Tan was announced as one of the biggest backers of the massive “Three Sisters” development idea.

The ‘Dubrovnik Pearl’ investment project is only the first phase of the Croatian Dream project, one of the most ambitious and largest investments projects here and will establish Croatia as the first ‘Lifestyle – Tourist – Eco friendly’ destination.

The WWF Warns Us the Mediterranean Is Becoming Tropical Sea
Europe’s Second Lockdown Already Crushing Stays
Will the Coronavirus Pandemic End the EU Experiment?
Four Balkans Countries Will Bid for 2030 World Cup
Previous: Mozirski Gaj Is Getting Ready for the Spring
Next: Here’s How to Plan a Trip to Plovdiv This Summer