The legends and spiritual wonders of Crete may never be fully uncovered. Then again, when local peasants in 1883 discovered ancient votive objects in the now famous Dictaean Cave no modern archaeologist had a clue of Crete’s hidden treasures. Then in 1884 Sir Arthur Evans and  Sir Arthur Evans and colleague D.G Hogarth paid a visit to Crete, and examined both the site of Knossos and the Dictæan cave – and “the rest is history,” as they say. Today, we’d like to offer this primer that reveals some of the sacred caves and peak sanctuaries that were characteristic of ancient Minoan Crete, religious sites that still hold mysteries unsolved. 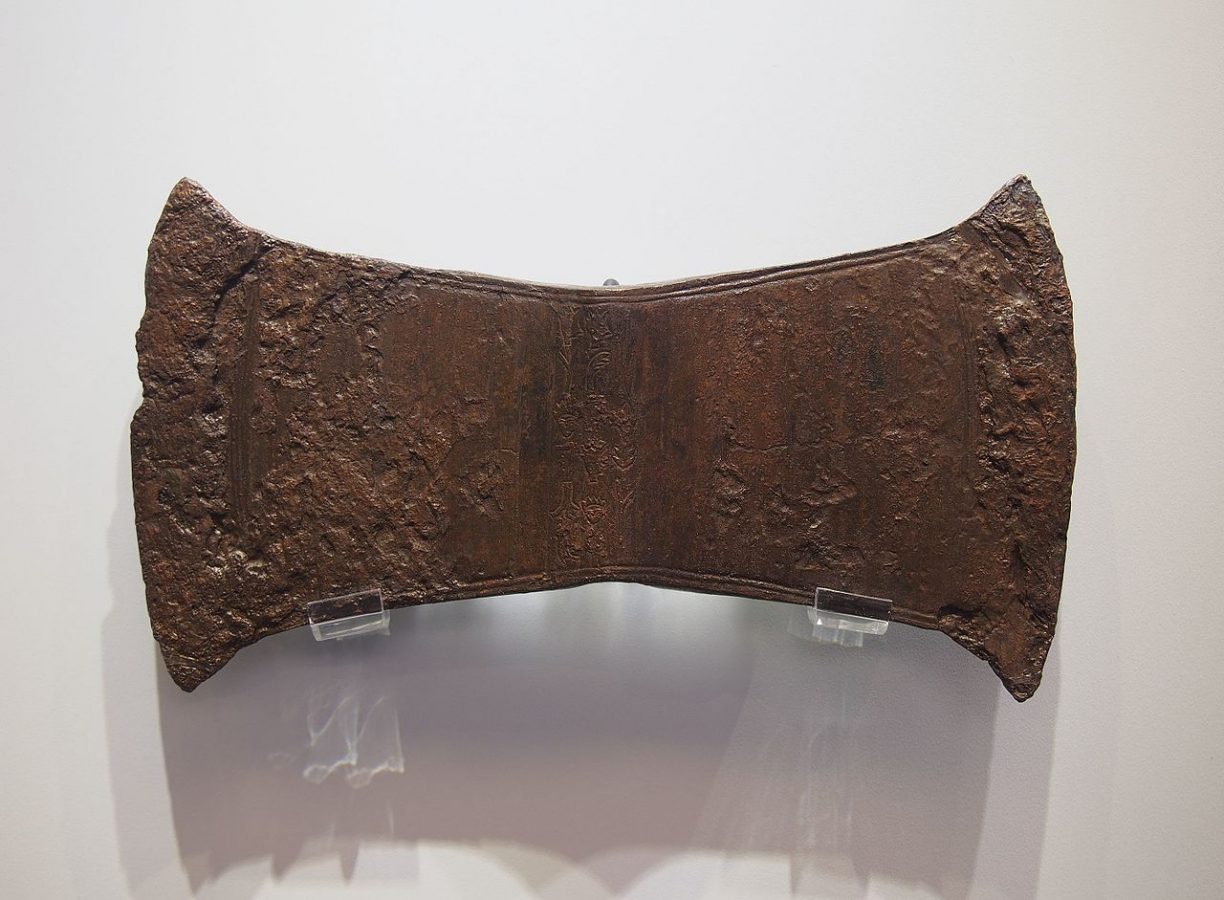 The Arkalochori cave was first studied after 1912,  locals found a good number of Bronze Age weapons there. Later weapons discoveries and a now famous double axe made of silver, prompted archaeologist to probe deeper into the collapsed chamber of the cave. When a young child found a golden double axe, the archaeologist Spyridon Marinatos took charge of the site and later discovered the side chambers, which had been blocked with debris from the collapse of the cave’s natural roof. It was in these side chambers that hundreds of bronze axes—twenty-five gold ones and seven silver ones were unearthed along with fascinating bronze long swords from the late third millennium BCE to Late Minoan II (ca. 1500 to 1425 BCE). Interestingly, the horde of weapons stands in sharp contrast to the otherwise peaceful nature of Minoan finds on the island. Another fascinating aspect of the cave associated with the axes is the association of the labyrinth, which literally means “The Place of the Double Axe”. Labrys is the feminine Pre-Hellenic Indo-European Minoan word for “Double Axe”, and was the Lydian word for axe according to Plutarch. This aside redirects our attention to the legend of the Minotaur and King Minos.

The Cave of Zeus is actually a system of caves on the slopes of Crete’s tallest mountain, Psiloritis (Mount Ida). Since antiquity this deep cave system has been the site of workship because of the belief this was where the titan Rhea hid the infant Zeus, to protect him from his father Cronus. Excavations have revealed many votive cult offerings inside. An interesting take on Mt. Ida is the fact the Ancient Roman historian Tacitus reported a belief, popular in antiquity, that the mountain was the origin of the Jews,  On the flank of this mountain, is the Amari Valley, the site of expansion by the ancient settlement at Phaistos. The cave has a single entrance and the inside is adorned with many fabulous stalagmites and stalactites. The birthplace of might Zeus is a title also claimed by the island of Naxos and by the Psychro Cave on the Lassithi Plateau on Crete.

At Inatos, the Fylakes Cave

Current day Tsoutsouras is the location of the ancient city of Inatos, where the port for Priansos was. The Fylakes Cave here is where legend has it, the goddess of childbirth Eileithya was worshipped. There have been many votive offerings found including copper and clay idols of men, pregnant women and erotic complexes, jewels and copper double axes, clay model ships, and even Egyptian faience (type of quartz) statuettes. Known to locals as the “fairy cave,” it’s legends were amplified by Stabo and Homer, who mentioned it for first time in 4 Linear B tablets of Knossos (14th century BC). According to the legend, Eileithyia was born by Hera in this cave.

In the south of Crete there’s a village where an archaeological site of a Minoan sacred cave sits in alignment with Phaistos palace from high up on the Psiloriti Range on the slopes of Mr. Soros. Inside the cave were found some of the best examples of Middle Minoan pottery, which were appropriately named Kamares ware. The light on dark polychromatic finds date back to MM IA, or the First Palace Period. The path leading up to the cave and to the Nida Plateau affords the most breathtaking views of the Messara Plain you can imagine. It is believed that the inhabitants of ancient Phaistos worshipped a goddess Eileithyia in this sanctuary. 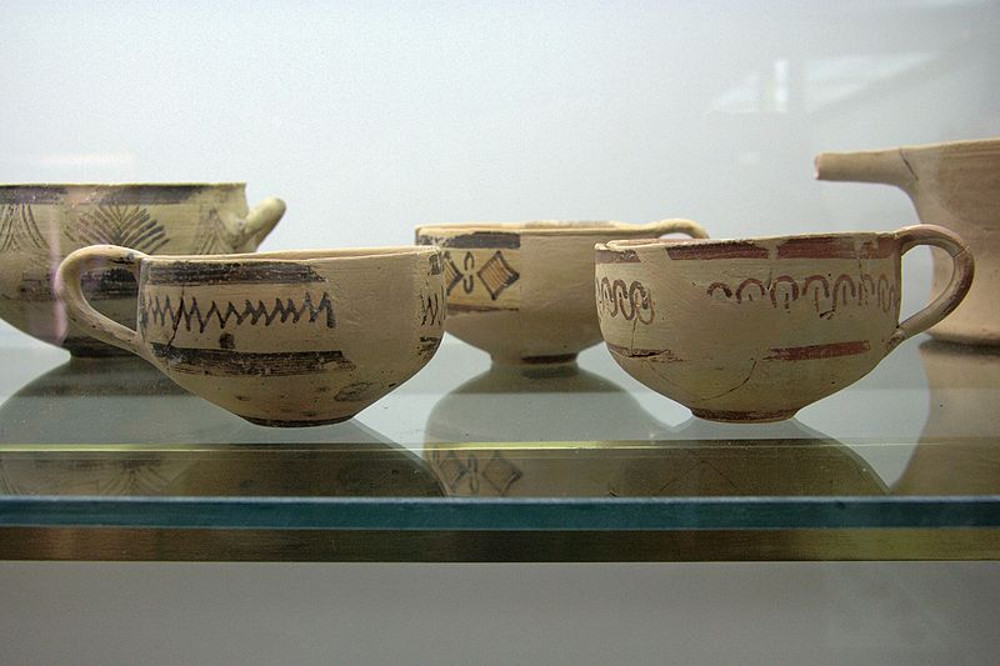 Excavations at this lesser known ritual cave produced artifacts of Neopalatial Minoan times. Situated in the far east of Crete about 6 kilometers outside Chania near the Perivoli Kydonia community, the cave’s most precious treasure to date is the famous Pseudostomous Panther. The cave is very inaccessible, so much so that archaeologists have had a difficult time excavating there. The extensive cave’s lower levels may yet reveal important finds.

The Cave Faneromeni is situated almost 800 meters on the Louloudaki Massive near the village of Avdou.  Another difficult to reach sanctuary, the fairly small cave has beautiful stalactites and stalagmites. This remote cave is there a fabulous golden Minoan double ax was found along with other priceless artifacts. 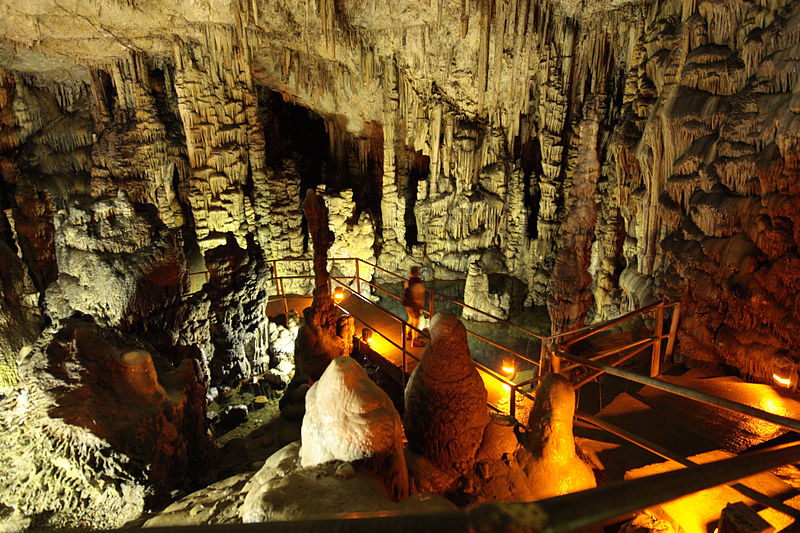 The most famous of Crete’s sacred caves, the Psychro sanctuary is located at the southwest edge of the Lasithi plateau high above the green fields of the plain. This is where most Cretans claim Zeus was born, and where Amalthea nurtured the infant with her goat’s milk. Archaeological finds in and around the cave attest to the site has been a place of cult worship for eons of time. In 1896, the famous archaeologist Sir Arthur Evans investigated the site. Bones of animals found in the cave attest to the Minoan sacrifice of bulls, sheep and goats, deer and a boar here. Furthermore, the cave having yielded an uncommon number of semi-precious stones, including carnelian, steatite, amethyst, jasper, and hematite further indicates the lofty importance of the site. 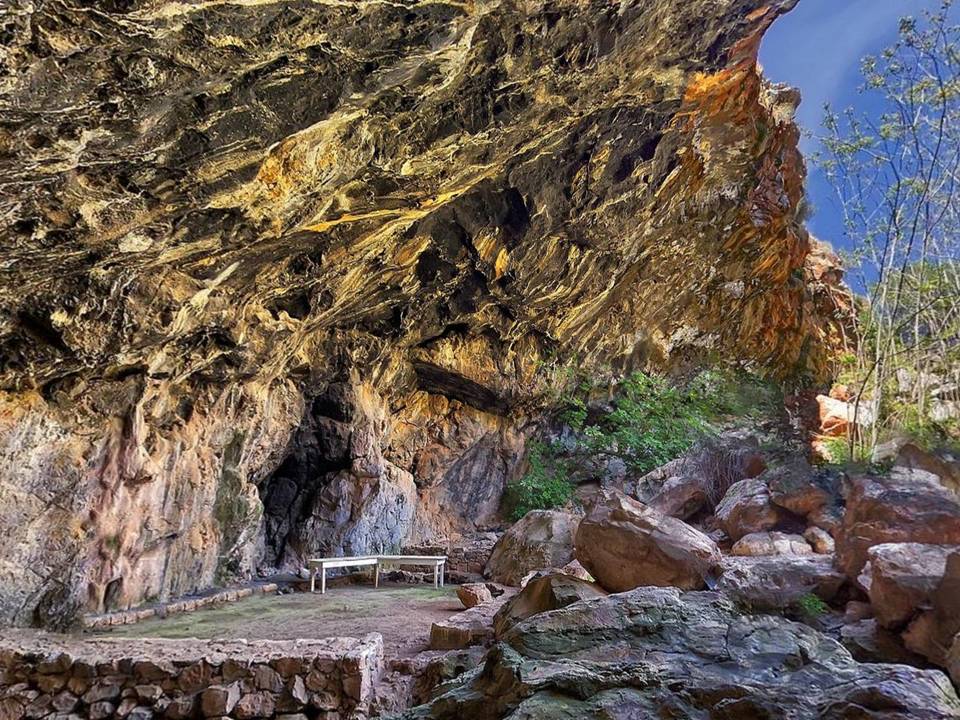 This fascinating cave is located in Gouves area, just to the northwest of the village Skotino. Situated 225 meters up, the cave was the site of worship for the Goddess Artemıs (Diana) Vritomartis. Just before the entrance to the cave is the Byzantine church of Agia Paraskevi, which dates back to Venetian times. Visitors to this sanctuary will be impressed with the complexes of stalagmites and stalactites. Archaeology here shows that the cave was another site of ritual sacrifice. So far, systematic excavations have not been done in the cave.