Albania Celebrates 100 of Independence All Through the Year

“Nothing can divide the spirit of a country,” said Albanian Prime Minister, Sali Berisha, in a speech to mark the centenary of Albanian independence. The country gained its independence from the Ottoman Empire 28 November 1912 – a day that marks a beginning of a new era, an era however not always dominated by positive developments.

The country lived through foreign occupation most of the twentieth century, first annexed by Fascist Italy and then by Nazi Germany during World War II. Things weren’t better after the collapse of the Axis powers: Albania became a communist state, till 1990 when the communist block collapsed all over Eastern Europe. But Albania’s trials were not over. The Kosovo War affected the country too, too soon after the 1997 rebellion that drove so many Albanians in exile.

But today, Albania can hope for a brighter, more positive future. A country blessed by spectacular nature, with skies of blue embracing her glorious mountains, where you can still hear the roar of the Illyrians – Albania’s legendary ancestors that shaped her spirit and history.

The coastline runs along the Adriatic and Ionian Seas and it is now the scene of luxury developments, such as the Lalzit Bay Resort and Spa – a five star resort currently under construction in the Eastern Mediterranean. 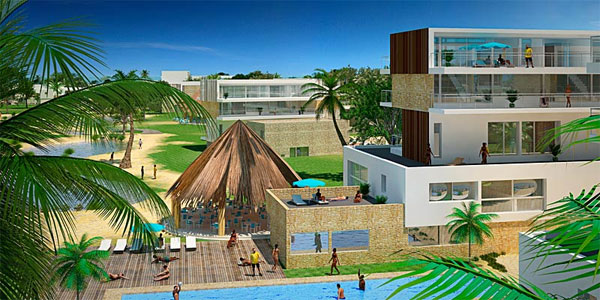 The Albanian centenary of independence will be marked all through the year with various events, including a bold endeavor organized by the Dajti Alpino Touristic Association, which sends the first ever Albanian team of climbers to place the national flag on the peak of Everest.

“As one of Europe’s most talked-about holiday destinations and investment territories, it is somehow appropriate that Albania is coming to prominence as the centenary of its independence approaches and conquering Everest is a wonderful way to symbolise the struggle, courage and determination that Albanians have executed over the years. This is a very important year for Albania,” said Ravin Maharajah, Partner in Lalzit Bay Resort & Spa, in a press statement.

And while Albania has made tremendous progress in the past 10 years, the next to come are crucial in her development. Ravin Maharajah continued:

“Indeed, Albania is a mysterious nation, where new tourism projects such as our 5* Lalzit Bay Resort and Spa and other major infrastructure improvements are transforming the country.Albania will have one of the most impressive road networks in the Balkans, with every community having access to a national road within 15-25 minutes. As well as this, Albania known as the ‘Small Norway of the Balkans’ thanks to its excellent water resources will be building 443 hydropower stations due to start in 2020 while energy and mining will continue to be two of the nation’s biggest sectors helping encourage further development and growth throughout the country.”

Deadly Albania Earthquake Casualty and Damage Tolls Climb
Archeologists Report Huge Neolithic Find in Albania
Air Albania to launch flights in September
Save the Blue Heart of Europe in Albania
Previous: Corporate Enterprises’ Im-mobile Travel Policies
Next: 7 Things to Do In and Around Bled