Some say this is Armenia's Stonhenge 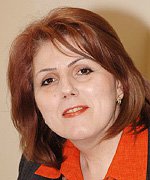 According to the news, the eighteen articles of the cooperation set in motion a collaborative effort between the two countries across cinema, museum, library arts from between 2012 and 2015. Also last week, Poghosyan met with Kuwaiti Ambassador to Armenia Bassam Mohammed Al Qabandi to discuss cultural cooperation between the two nations.

As early as late last month, Poghosyan announced renovation projects for some of Armenia’s regional centers. Also, ancient stone pictures in Armenia are to be listed in the UNESCO World Heritage list, news last month reflecting an archaeological cooperation between Germany and Armenia at Jermuk and Sisian. That project,  led by Saxony-Anhalt state Professor Harald Meller and Director of  Archeology and Ethnography Institute, illuminates what many believe is is the Armenian “Stonehenge”, a place of extraordinary interest.

Meller’s work, including his study of the so called Nebra Sky Disc in Saxony, is well known to be of paramount importance to the world of archaeology and ethnology, not to mention Germany and Armenia culture. As for the Armenia, Meller and other archaeologists have made breaking discoveries there.

Some say this is Armenia's Stonhenge

For visitors to Armenia, many of these wonderful cultural and archaeological sites are in remote areas, for all intents and purposes inaccessible to visitors. This is, in part, one of the big initiatives of Poghosyan’s minsitry, to promote and help facilitate the building of roads and infrastructures to allow for tourism to Armenia.