Choose the secluded splendor of protected waters Andros Island beaches, some of the most beautiful anywhere.

For most travelers the Greek Islands are a destination of note, oft considered, but perhaps overlooked. But whether it seems out of vogue or too cliche to book these marvelous Mediterranean marvels or not, most wayfarers do not know what they are missing. Today we take a short visit to the Cyclades, and a year round paradise known as Andros.

Imagine a world traveler visiting the United States for the first time, spending a week in New York, then flying home to tell the family the United States is a crowded and noisy place with a million taxis. It happens, just like tourists travel to Greece and tell their tales. The problem here is obvious, even the very well traveled miss so much. Andros is just such a place that could easily be underestimated or missed on an itinerary. Especially where the intricacies of the place are concerned. 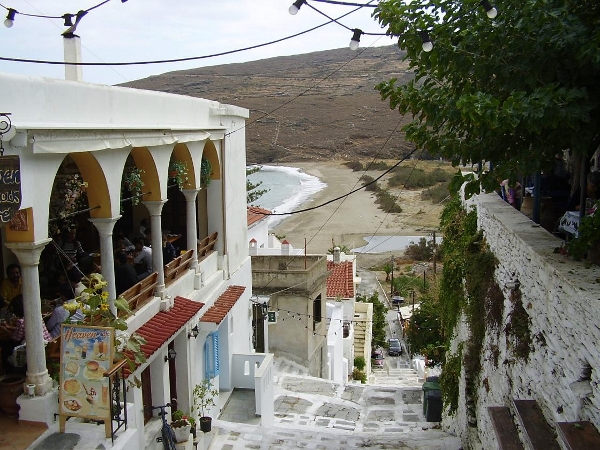 Be transported down the path at Andros Chora

The Northernmost of the Cycladic chain of Islands, Andros is the closest large Island to Athens actually. Maybe this is why it is overlooked or only given a cursory weekend visitation – but the Athenians flock here for their end of work respite. Andros is not a place a day or two, or even a week would allow her treasures to unfold. 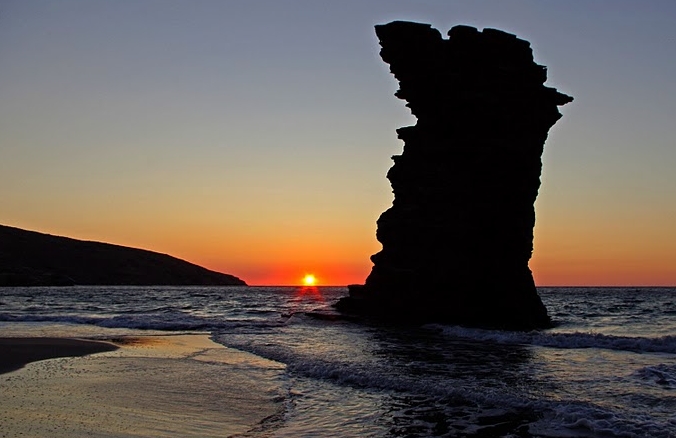 With a colorful history dating back to the Ionian settlers Andros has been influenced by any number of cultures over the centuries. This is revealed in the multifaceted architecture of the place, from the ancient ruins of Paleopolis to Venetian-like villas in Chora, the Island is a menagerie of style and cultural diversity. In recent times the Island has played home to Athens and Greece’s wealthy,  ship owners and wealthy business people take their weekends on the pristine beaches and byways of this extraordinary place.

Andros is dotted with a myriad of  very picturesque and authentic villages and towns. Those situated in the  mountains are built amphitheatrically, with stone houses surrounded by trees. Then the  fishing villages represent a typical cycladic tone with whitewashed cubic houses set along the seashore. Then there is the capital city, really a large village itself, its fortified nature offering a rather more Venetian flair alongside typical cycladic architectural. Chora is actually stunning. 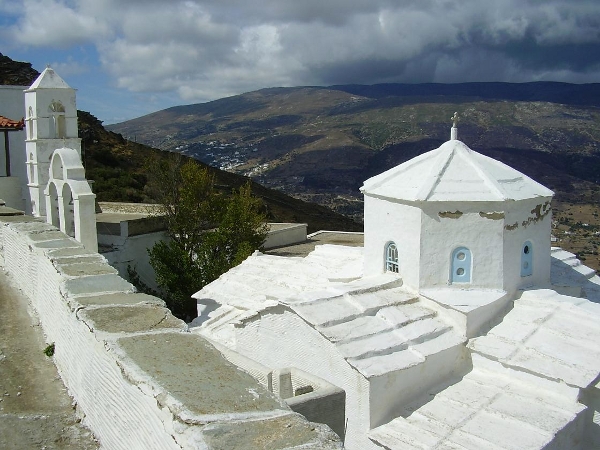 Listing the diverse and oh so numerous villages and sites is impossible, but any visitor should take in those tiny towns dotting the coast around Korthi Bay. Specific sites to take in, of a traditional touristic nature, include; Faneromeni Castle (near the village of Kochilou),  the monasteries and church which inhabit almost every village, the valley- ravine of Dipotamata, down to Yainniseo and Sineti bay (the waterwheels), the fantastic freshwater springs running throughout Korthi, and of course a hundred other natural and man made attractions. Then there is the municipality of Hydrousa with its surrounding villages on the North West coast, and of course Andros the capital to the East. 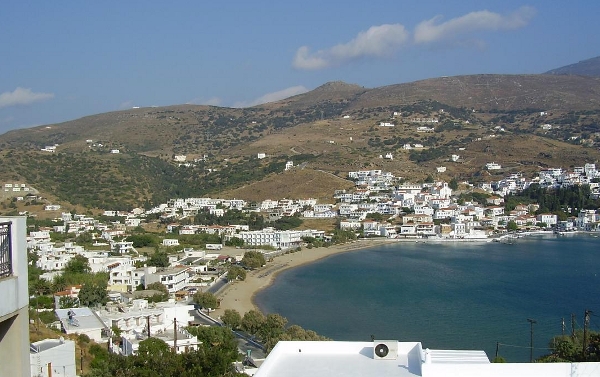 Batsi from the distance

The golden sand beaches of Andros dip into the crystal clear waters of the Aegean just like any tour guide or storybook tale of Greece would portray them. But what most guides do not reflect are the hidden coves, the unlimited variety of waterborne enjoyment of these places. Andros literally has a beach for anyone’s taste. Full equipped and chic and sun bed laden, or unspoiled natural enclave secreted beneath a rocky cliff – you get the idea. Andros is a really a world unto itself where seaside enjoyment is concerned.

From the commercial and sometimes overpopulated variety like at Batsi, to the secluded – of almost unreachable splendor near the Gavrio area, like any good Island, Andros has better than its fair share of wonderful beaches. As you can see in the images below, when the tour people say “golden” sand, they really mean golden. Then there is the incomparable Grias Pidima (top) – an unmistakable jewel where memories are etched in the visitor’s mind. 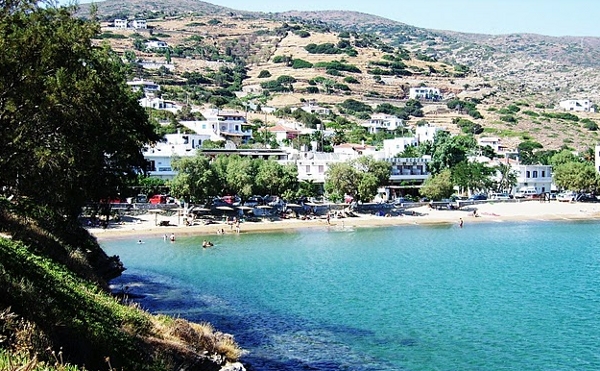 Batsi has something for everyone too, just more commercially oriented

Andros is not, as you might begin to think, just a beachcomber’s paradise. The shopping, nightlife, cuisine, history, and especially the people of the place are as diverse and vital as anywhere – except perhaps a bit more friendly. Our search for hotels and other accommodations also revealed an added bonus for people wanting a Greek Island getaway place – Andros is about as reasonable as it gets where rooms and other hospitality is concerned.

A good for instance is the Andros Holiday Hotel illustrated below. Here guests enjoy 5 star service at a economy motel price. For as little as €50 per night, clients stay right in thick of things in Gavrio. 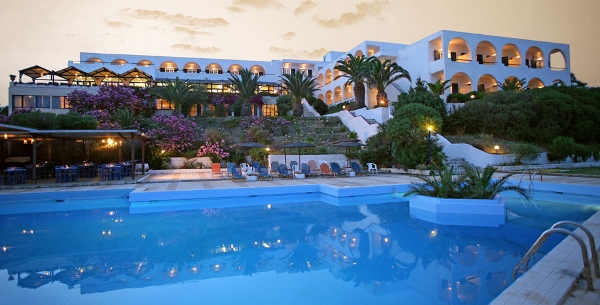 Another interesting fact about Andros is that most people visit the Island during what is considered “the season” – when after all Andros’s climate actually makes it an ideal environment year round. Look at it this way, today in Germany where we are it is cold and damp, about 40 something degrees and about to rain. Right now on Andros is feels like 72 degrees Fahrenheit, and the skies are partly sunny. 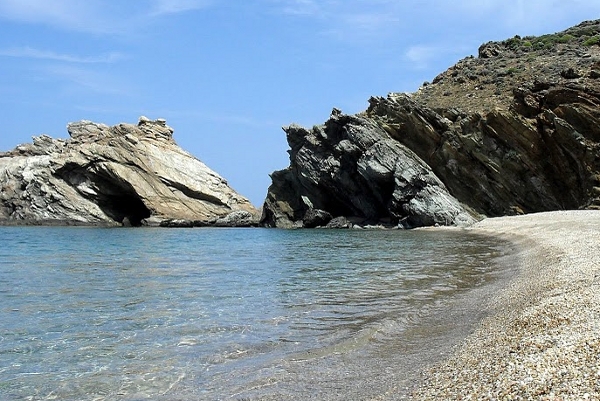 For more information about Andros, we encourage you to visit Greeka dot com, Travel to Andros, and Andros Hotels. But especially, the reader should check out this authoritative site that covers the Greek Islands, particularly Andros, like no other.  Last, but certainly not least, Hotels offers some of the best deals and information on accommodations throughout Greece. 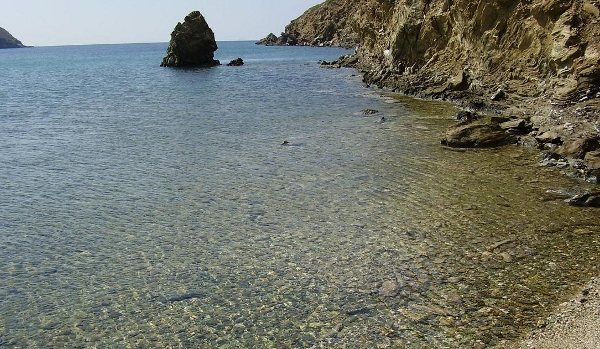 Another of Andros' golden secluded wonders

Credits – Many of the above photos are courtesy perhaps Greece’s biggest fan, Hans Huisman. His Angelfire site holds more image and information information than just about any site on the web.