In our efforts scouring the web for information on the Balkans, we often run across all kinds of attractions, great and small. Not the least important people, places, and things having to do with travel, hotels can often be obscured from view – at least online, that is. The other day we ran across just such a hotel gem presented itself. The Grand Hotel Tirana, while a bit hard to find online, offers a hospitality value worth mention. 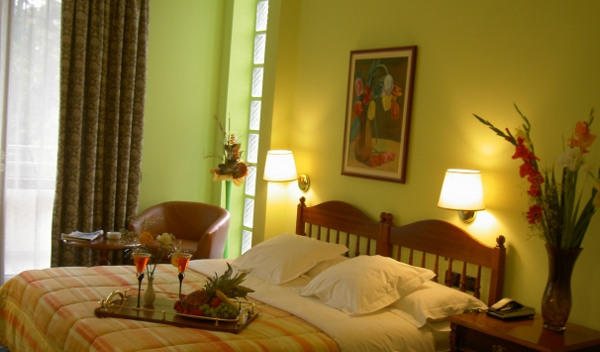 A double at the Grand Hotel Tirana - courtesy the hotel

Built in 2001, the four star Grand Hotel Tirana is situated in the heart of Albania’s capital. Surrounded by green spaces, the hotel is a stone’s throw from the Presidential Palace, Tirana’s Main Boulevard, and most of the city’s most popular attractions. A small hotel, by some standards, the 31 rooms here are however, offered in 5 star fashion. To be honest, of all the hotels we ran across building Argophilia Albania, the Grand actually presents itself better online than most of the other ones – even the more expensive accommodations. 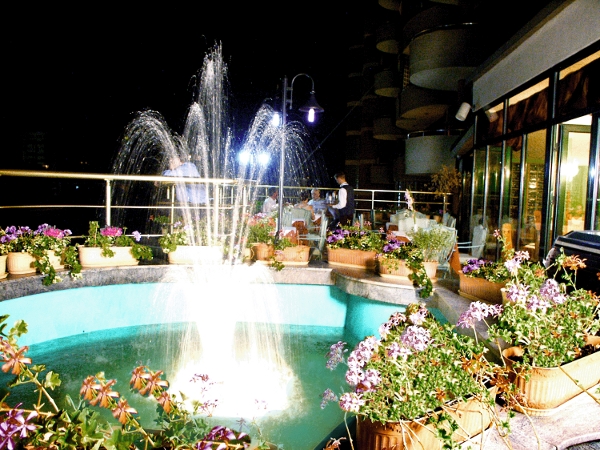 As you can see from the images, when compared to some others of Tirana’s hotels, the Grand is strikingly cozy, crisp, and down right “homey” when you get around to it. Spa and sauna to the simple elegance of the restaurant, there’s nothing pretentious about this place. SAT TV, Wireless Internet, all the usual 4 star suspects are here too. The hotel also has some of the best views of the city of any we know of, and all the reviews we found were highly positive.

On the down side of things. Venturing to the hotel’s website proves to be a “mixed bag” of mediocrity – all be it not nearly as bad as some we found. Booking a room online via the site seems NOT to be an option. Even more troubling than this, we found the room rates to be a bit exorbitant. The site quotes double room rates at €160 euro per night w/breakfast. I could fly to Milan from here in Germany via Ryan Air and stay in a 4 star there for that rate. The good news here is, you can book on Hotel Info and save a whole €8.  Yippee! 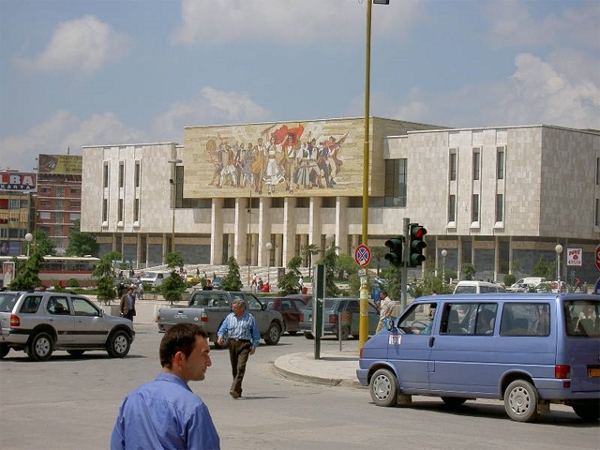 Rave reviews about hospitality can be expected when a king’s ransom is being asked for a room. But, without harping on the Grand Hotel’s room rate too much, this great hotel is just 6 or 7 minutes on foot away from the National Museum (above), and most other important attractions in town.

Alternative hotels with various star ratings in the area include: Hotel Miniri (closer to the center),  Hotel Nobel Tirana (€44), Hotel Seven Tirana (€40.50), and the Diplomat Fashion Hotel (same rate). When the comparative is looked at (we will begin doing these soon) it appears 4 star accommodations in Tirana are a bit pricey in the fist place. A couple of relatively similar hotels offered exactly the same rate as the Grand Hotel. The only departure seems to be Starwoods’ Sheraton Tirana, which offered a king room for about €20 less than the Grand.

For more information about the Grand Hotel Tirana, we suggest you contact the hotel via email at: info@grandhoteltirana.com – alternatively, staff there can be reached via phone at: +355 4 2253 219