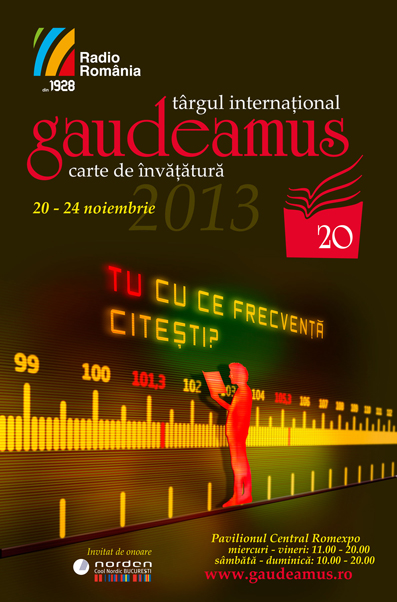 One of the most important cultural and editorial events in Romania, organized each year by Radio Romania, has as guest of honor the group of the Nordic countries: Denmark, Iceland, Norway and Sweden.

Under the slogan “Cool Nordic Bucureşti”, nine Nordic authors have been invited to the GAUDEAMUS International Book Fair 2013. Literature lovers will have the chance to meet with Icelandic writer Yrsa Sigudardottir; Swedish authors Jan Wallentin, Anders Roslund and Borge Hellström; Danes Anders Rønnow Klarlund and Jacob Weinreich, who sign under the pseudonym A. J. Kazinski, the Finns Salla Simukka and Antti Tuomainen. These guests are published by the Romanian publishing house “Editura Trei”. The Norwegian author Kjersti Annesdatter Skomsvold will also be present at the fair, his work being published by “Editura All”.

The fair is a unique opportunity for the Nordic Embassies to promote their countries´ literature and core values in a country where the interest in the Nordic countries is on the rise.

Organized since 1994 by Radio Romania, the most important book exhibition event in Romania is also the only book fair in the world to be initiated and organized by a public radio broadcaster.

Held every year at the Central Pavilion of Romexpo Exhibition Center – Bucharest, the 2013 Gaudeamus – “Book of learning” gathers over 400 Romanian and foreign publishers, printing houses, education institutions, cultural centers and institutes, media institutions and book sellers. Multimedia companies, literary agencies, cultural and educational NGOs, professional associations, bookshops and libraries will also attend the fair. A book exhibition and a literary café at the same time, the Fair offers a variety of over 650 cultural events per edition, all in a friendly and relaxed atmosphere. Over 100,000 visitors are expected to attend this year´s cultural marathon.

Book enthusiasts can visit the 2013 edition of the Gaudeamus International Book Fair, till November 24th.