A private three-storey residence collapsed in Sochi last Sunday, because of a landslide on the new Kurortny Avenue, which is being built for the Sochi Olympics of 2014. Fortunately, there were no casualties, but the damage to the property is beyond repair, Korrespondent.net reported. 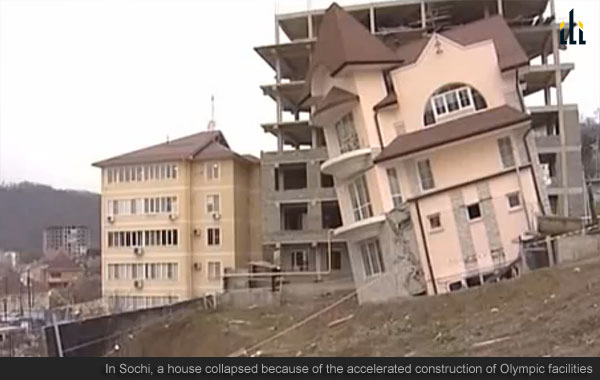 It is very unlikely that the house can be restored, the reports said, but there is a probability that the owners may have to assume responsibility for the landslide, since the building was an illegal construction.

The landslide occurred at the emergency exit of a newly built highway tunnel on Kurortny Avenue. The construction of the new road begun in January 2013 – the first phase includes three tunnels and four bridges. According to official authorities, the road is built with minimal interference to the environment, taking into account the characteristics of the landscape and in full compliance with the green standards defined by the Directorate for Construction of Roads “Black Sea”.

Yet according to the Sochi City Administration cited by the Korrespondent, collapse occurred as a result of loss of stability of the surface soil and the destruction of the retaining wall.

Kurortny is supposed to be the longest road in Sochi, and it will traverse through the center of the city. The project is currently carried out in the cramped conditions of a densely populated city affected by traffic congestion. When the landslide occurred, vehicles had time to withdraw from the area.

The unfortunate hero of this story is now nicknamed the Leaning Tower of Sochi.