Yesterday I wrote a short post on LinkedIn “Pulse” with my view on Expedia’s new “Accelerator” marketplace. The experiment where hoteliers get to bid for the hotels’ visibility on the OTA, it resembles a carnival act for me. At least one comment on my LinkedIn, suggesting I was a mean spirited ranter because of my discord. So, this prompted me to elaborate here. I’ll leave it to you to decide, whether or not Expedia is out to milk hoteliers dry with this one. I’ve got a real problem with Expedia’s new “bidding” market. Here’s why. 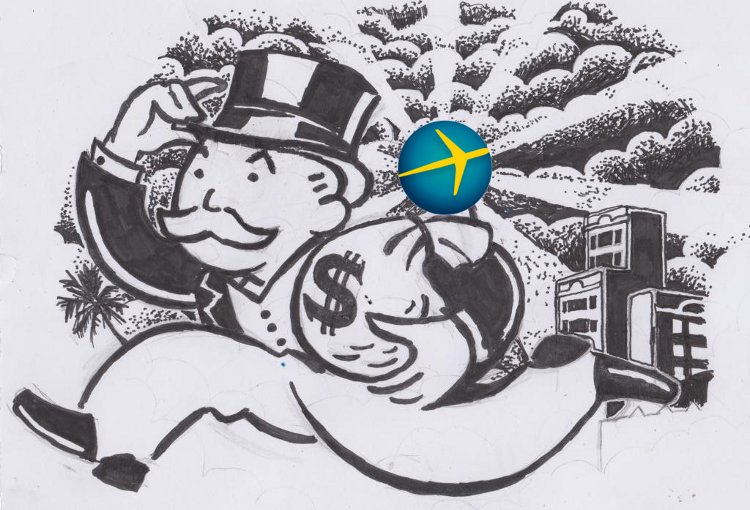 Let’s just take the gloves off on business in the digital world. “Money talks and bullshit walks”, it’s a crass southern saying from my childhood, but it is a truism if ever there were one. Products, any kind of commodity has to be able to add value in order to survive over the long term. Just how much value is presented in the digital sphere though, this is a complex mix of innovation, science, and red hot marketing prowess. The “money” part of any business out there, can be substituted in various dosages to cure any of those three elements. Let’s face it, with enough money I can create a “trend”, anybody can buy innovation, and the science is just physics. So we arrive at Accelerator, another Expedia endeavor to solve a real world problem – a corporate dilemma that grips our world – growth in a zero growth circus. I think the intuitive among you understand what I am saying here. But let me elaborate on this point.

Nearly every hotel on this rock we live on uses Expedia and/or one of its subsidiaries as a booking channel. If we can agree here, then illustrating Accelerator as a money milking machine will be vastly simplified. Continuing the argument, can we establish the growth rate of new hotel beds on Earth, especially during these perilous economic times? The bottom line here is hotel rooms are frozen at zero growth worldwide, or at best slowly increasing. While paid reports by PWC and others end up painting a more positive picture, the reality locally is a different story I assure you. Euromonitor and the other “experts” measuring the corporate Holy Grail of growth, they’ve need of good news for CEOs and governments. For Expedia and the other corporate middlemen though, shareholders want dividends. So where do new margins come from? Huge hotel chains like IHG must tell us there is growth and bigger RevPAR, because they need investors to stay calm. The same goes for every industry tied to hospitality – gloom and doom scares capital away, now doesn’t it?

Statista is one metrics source that reveals the revenue-investment situation for hotels, and for OTAs like Expedia. This simple chart below tells us “growth” for either hotel or Expedia profits gleans about what your average savings account brings an investor. 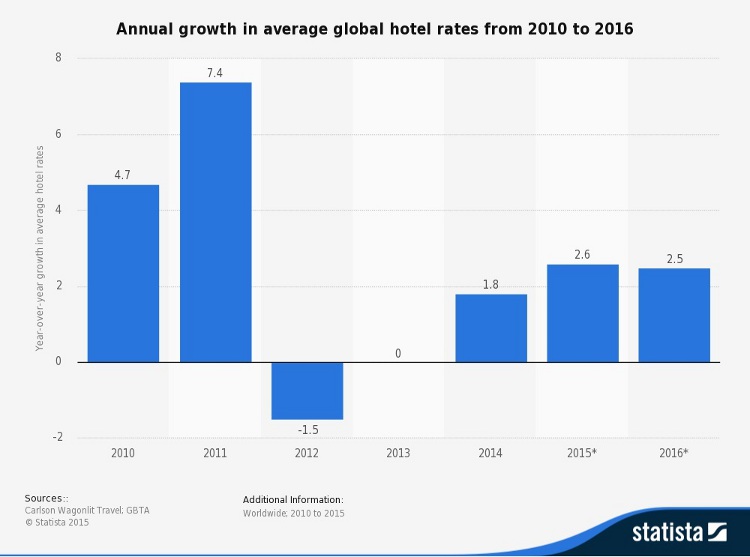 Furthermore, Statista data from United States; HVS Global Hospitality Services; STR; 2006 to 2018  reveals a horror story of a slow market value growth winding down to negative growth by 2018. Look my friends, you do not have to be the CFO of Expedia to understand how margin is derived from marginal growth. Half the hotels on the planet are going broke, middlemen have been sucking their gallons of blood for years now, travel agencies and others are regional vampires, apparitions afloat only by the skin of the fangs in most places. On Crete, for instance, agents deliver 100 percent occupancy at discounts so low the hoteliers are in debt up to their eyeballs – and the premium rooms Expedia and the others snatch a mafia share of. There is no arguing these facts – from the hotelier perspective that is. Another big rub I have with this “Accelerator” moves is the timing. Right now most hotels cannot afford more expenditures for what amounts to disguised advertising.

Look at the World Bank GDP growth report here. IHG executives tell us hotel chain success is tied directly to overall GDP, so it stands to reason Expedia profits are as well. Every country on the planet is looking at slow or negative growth now, and companies still need to satisfy investors. So, “doubling down” on the hotels with enough money to outbid their competitors is supposed to create a fair marketplace? No, the independents and those already strapped for revenue will lost still more, while Expedia’s real paying customers get to vie it out to the last drop of RevPAR. This is the reality, not some rant on my part out of hatred for Expedia. But I will tell you what I do hate – subterfuge.

Amid an atmosphere of economic cataclysm we find big brands doing their PR best to toe the corporate dogma line. Investors such as those in the Baha Mar ($3.5 billion do far) mega resort stand to lose billions on a property that is a veritable Titanic of hospitality. Yahoo! is all but folded, showing a digital paradigm taking place. Airbnb has cut into hotel revenue in New York alone by $ 2 billion (tens of millions for Expedia). In Paris terror attacks have already cost hotels there billions, what was a 90% occupancy market is now down to 70-something percent. Dubai and other frivolous fantasy developmental experiments are near folding. Cheap shale oil pumped from the last of America’s strategic reserves have helped tumble trillions in investment potential of late. This Bloomberg report features a “gloom” recipe of disaster. Economic pressures on Saudi Arabia, Qatar, and especially Russia promise somewhere in the neighborhood of $1 trillion US evaporating into thin air. 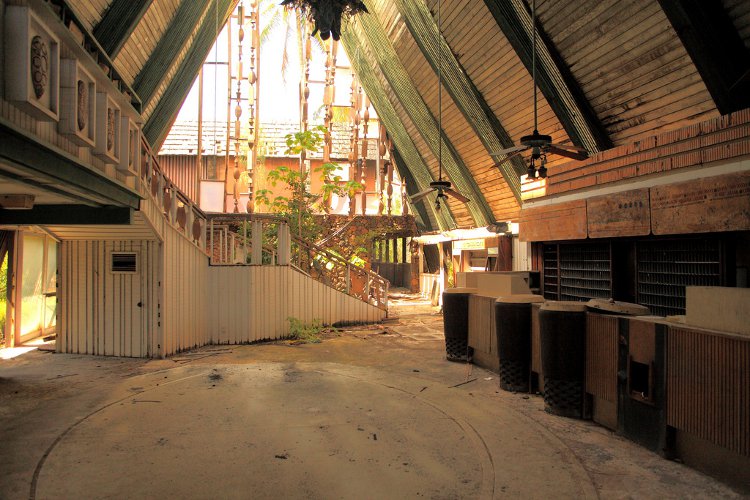 Gloomy? A spiteful ramble? How about this, Expedia came up with Accelerator on the growth spurt that came about in 2011 for hotel economies. The corporate bean counters there, dedicated to slicing and dicing the bottom line always, they were vested in the experiment anyhow. So, some brilliant actuary at Expedia has an “aha!” moment, realizing the “optimizing” solvent and popular hotels was the only way to scratch out another % point or two. And there you have “Accelerator” – the market place where hotel owners, “step right up and take your chances folks, come one come all.” I feel like it’s a carnival ride where only the successful hotels get to ride, and to pay even more for their past successes too.

As of yesterday Expedia stock was down from a high of $137.67 in November of 2015, by $28.64 at $106.96. This, up from the yearly low of $91.53 a few days ago, it’s what these corporations operate on – margins and market cap. From December 31st 2015 to mid start of February 2016, Expedia recorded the single steepest stock price drop (over $30 a share) in the company’s history for a month span. So to end my “rant” here, someone please tell me how hotels paying more to be listed at the top of Expedia’s billboards is saving all hotels money. Jeff Higley at HotelNewsNow probably said it best in his analysis of Expedia commission structure. Speaking about the basic commission situation in 2013, Higley concluded this after speaking with Expedia’s CEO Dara Khosrowshahi:

“Commission structures might not be the most advantageous for hoteliers, but if they are planned for, if inventory is property disbursed to various distribution platforms and if solid revenue management techniques are employed, they really shouldn’t be a major deterrent to conducting business.”

In my view, what Expedia just came up with is a deterrent for the majority of hotel owners.

What If the Secrets of Keftiu Could Rescue Humanity’s Future?
Odd Christmas Traditions Around the World
The Connectedness of Beauty: A Secret of Crete Few People Know
Visit Greece – The Nation That Put the Elderly Last In A Crisis
Previous: 20 Years Ahead: Woody Wade on Hotel Yearbook 2036
Next: Why Is Every Hotel Not Selling Rooms Via Bidroom?