If you enjoy extreme sports like rock climbing, why not look into taking a rock climbing vacation in Slovenia?  In recent years Slovenia has become an incredibly popular tourist destination, and with so many mountain and hill ranges, rock climbing is but one of the many activities you could undertake whilst you are there.  Whether you want to go on a full rock climbing holiday, or just take a couple of days out from your other holiday activities is entirely up to you, but you may find that with so many locations around for climbing, you may not have any time left for anything else.  There are 3,600 routes in Slovenia, as well as 84 sports crags! 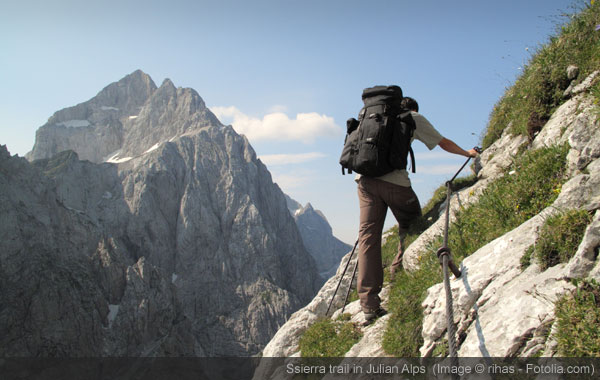 There are three main areas in Slovenia where you can enjoy climbing, which are:

Celje is in the north eastern part of Slovenia and there are two crags that are fascinating for any extreme sports lover:

There are over 300 sports routes that you can follow in this area, all made out of limestone rock.  Kamnik is a great area for those who are new to rock climbing as they have lower grades than Kotecnik, which has a range of difficulty grades.  The only time of year that rock climbing is not advised in these areas is during the winter, but as these areas are in a forested part of the country, all other seasons are fine.

Celje itself is an absolutely beautiful little town steeped in history and culture.  One thing you may also experience is one of the very frequent minor earthquakes that plague the area.  It is not a small town, so you can also enjoy some nice nightlife and wonderful food in one of the many little restaurants and taverns.

Rock Climbing in Bled and Bohinj

Bled and Bohinj are in the north western part of the country and lie in the Julian Alps.  There is truly no prettier area where you could go rock climbing, situated in the middle of the mountains right next to a lake.  You could have a full extreme sports holiday here, including canoeing, mountain biking, paragliding and rock climbing, as well as less strenuous activities such as water sports and hiking.  Within Bled and Bohinj, you will find more than 350 routes through seven crags on limestone rocks.  There is a variety of grades, so everyone can enjoy this area.  Again, winter is really the only time when this area is unsuitable for rock climbing.

Bohinj has gained in popularity in recent years, offering many wonderful sites of natural beauty.  During the winter, you can indulge in a variety of other extreme sports, including snowboarding, ice climbing, skiing and ice skating.  Summer is a great time to spend enjoying the lake.  Bohinj is said to be one of the most beautiful areas of Slovenia, with untouched nature.

There are also some very interesting legends surrounding the area, including the belief that the magical creature Zlatorog (Gold Horn) lives in the mountains.  Due to its geography, Bohinj has been quite isolated for many years and it is even said that the Turks once tried to invade the area but turned around in the belief that they had actually reached the end of the world.  One other legend, amusingly found in exactly the same way in Wales in the United Kingdom, is the Devil’s Bridge.  The legend in both countries states that an impassable gorge was preventing people from farming adequately.  The devil agreed to build a bridge on the condition that the first living thing to cross the bridge would have to give his soul to the devil.  The villagers then sent a dog across, tricking and enraging the devil.

Osp is the most popular area for rock climbing in the whole of Slovenia.  You will be able to find more than 600 routes with grades enjoyable for everybody, from amateur to professional.  You will find the three main crags within just four kilometres of each other in limestone rock.  There are both single and multi pitch sports.  You can climb in Osp all year long, but the best periods are autumn and spring.  As Osp is so close to the borders with Italy and Croatia, you may be able to visit those countries as well, or indulge in some rock climbing over there.

Osp is said to be one of the oldest villages in Slovenia, with written history dating back to the year 1067.  A small village, it is best known the world over for rock climbing mainly because its climbing facilities are free all year round.  A little factoid about Osp is that it was the very first village in this part of the world that had a Slovene school.

Some Shopping Before You Go

If you are not experienced in rock climbing yet, you may want to consider purchasing some equipment.  The most basic things you need are:

If you are climbing without an organised tour, you will need the actual climbing equipment as well, including ropes and hooks for example.  Rock climbing can be a very expensive sport, but if you like the sport it is worth the investment.  Of course, never forget your camera because the scenery in Slovenia is mesmerising and you will want to eternalise your experience.

Our guest author, Laura Ginn, is a writer and editor for Extreme Sports X, an extreme sports magazine that is updated daily with the latest news, reviews and feature length extreme sports articles.

Lea Sirk to Represent Slovenia at Eurovision 2018
Slovenia and Croatia See Tourist Overnights Boost
Slovenia Will Play Host to International Golf Travel Market 2018
NATURO Travel Fair in Gornja Radgona Is a Must Next Week
Previous: NYC Hotels Get Panic Alarms After Strauss-Khan Scandal
Next: Enjoy Your Trip: 5 Holes to Avoid During Your Gap Year