Kahramanmaraş, a charming destination in southeastern Turkey, known for its production of ice cream and textiles, but also for beautiful countryside, and valuable historic landmarks, now has a new landmark to beacon visitors: the first international-quality mall in the city, Piazza Maras Shopping Center. The mall, built by US-based Amstar and Turkish partner Renaissance Development, opened officially on Tuesday, April 30, 2013. 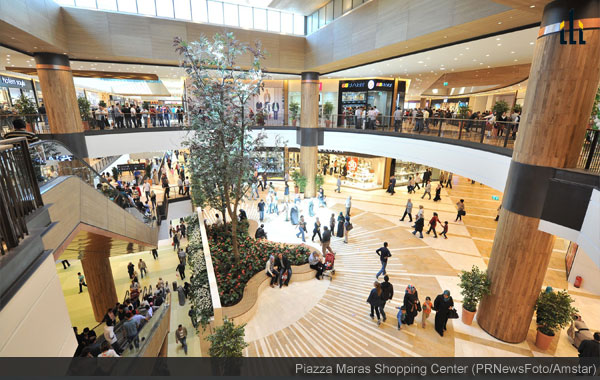 The day it opened, the mall attracted nearly 115,000 buyers, 26% of the urban population of Kahramanmaraş. Ideally located at the heart of the city, at the crossroads of major highways for north-south and east-west, Piazza Maras Shopping Center will undoubtedly prove to be an excellent investment for its owners, but also a great resource for locals and tourists alike.

“With the location of the project and its critical size, we expect it will occupy the whole catchment area of the city and become the main attraction in Maras in the foreseeable future,” said the president of Amstar Global Partners, Jason Lucas .

The building itself is a noteworthy landmark. Designed by Los Angeles-based architecture company 5 + Design, the edifice combines modern and historic elements, enhanced by a innovative use of stone, plaster and wood, and integrating harmoniously with the urban landscape of the city. The mall boasts 153 retail stores, 24 restaurants and cafes, a family entertainment center, an ice rink and an eight-screen cinema.

Turkey Wildfires Are the Worst Ever – Experts Say It’s Only the Beginning
Turkey Opens 2,900-year-old Altintepe Fortress to Tourists
Panagia Sumela Monastery Frescoes Vandalized in Turkey
The Troy of Legend Now Thought to Be Much Older
Previous: Romanians Flock to the Coast to Celebrate May Day
Next: City of Sochi Opens Spring with Labor Day Festivities