A traditional German festival, Oktoberfest is now part of universal culture, and is a popular event all over Europe. This Fall in Budapest, Oktoberfest lasts three days, from October 11, to October 13. The event takes place in Kopaszi Gát.

For Budapest, this is the first time ever when an Oktoberfest takes place. True to international tradition, the festival will feature more than 100 original, different beers, from local breweries, but also from well known German beer makers, and brewers from other European countries with strong beer making traditions. 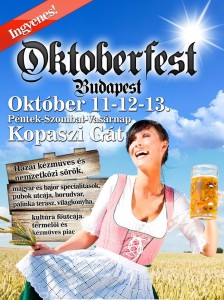 A true family event, the Oktoberfest will have a rich, diverse programme for young and old. There will be a special “Fairy tale corner” to keep children busy, while parents enjoy walks on the “Budapest Pubs Street.”

Beer is not the only beverage to be served at the festival: true to its traditions, the Hungarian capital will also feature a Oktoberfest Budapest Palinka-Terrace. And if you don’t like palinka and beer, than head on to the Oktoberfest Budapest Vineyard. All beverages are paired with local and international cuisine.

Just like the original Oktoberfest in Munich, Germany, the event will also feature an agricultural fair, as well as live music performances, and other surprises for the guests. If you are curious, there are no entrance fees to the park grounds, but the beers, drinks and food are priced differently, depending on the vendors. Bring cash.