The Sedlec Ossuary (Kostnice v Sedlci) is a legendary burial place, located inside a small Roman Catholic chapel, beneath the Cemetery Church of All Saints in the Kutná Hora Sedlec suburb. This is one of the most visited sites in the region, attracting over 250 thousand visitors annually. The odd monument is the final resting place for over 40000 people, whose skeletons are turned into mesmerizing dark art. 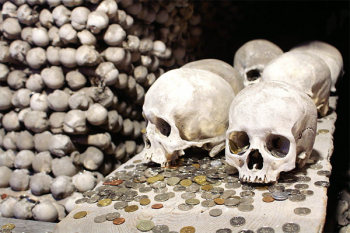 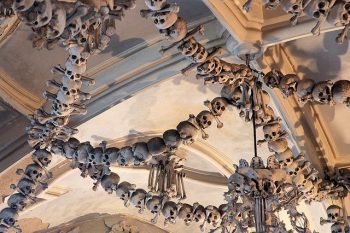 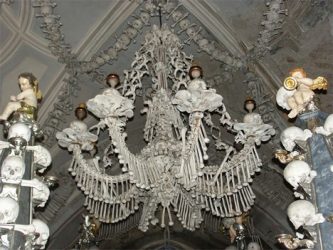 The ossuary was born around 1400, after the Black Death. At the time, the lower chapel of the newly erected Gothic church was used to pile skeletons from the graves unearthed during construction. The Bone Church as it stands today is the work of a Czech wood-carver, František Rint, hired by the Schwarzenberg family, in 1870, to put the bone heaps into order.

Rint’s imagination and art created one of the creepiest religious landmarks in the world, guaranteed to overwhelm you. Almost everything inside the ossuary is made of human bones: the chandelier, sceptre, eucharistic objects, sculptures. Only some cherubs and the statue of Christ on the cross are traditional objects, as you’d expect to see in any other church.

Despite local authorities plans to close the ossuary for the next five years, after numerous messages from tourists from all over the world, it was decided that the popular attraction remains open, and can be enjoyed by fans of dark tourism. The ossuary can be visited daily, except December 24th. There is a small entrance fee: adults 90,- CZK and students 60,- CZK.