Is there a more exotic destination than Marrakech? The “Ochre City” was once capital of the vast Almoravid Dynasty, which spread across the Northwestern Sahara and half of Spain. Today visitors to this mystic city of sultans may best experience what being royal in Morocco means staying at one of the world’s great hotels, La Mamounia. For the finest in Moroccan hospitality and magic, this place is that once in a lifetime chance today, at the grandeur of old. 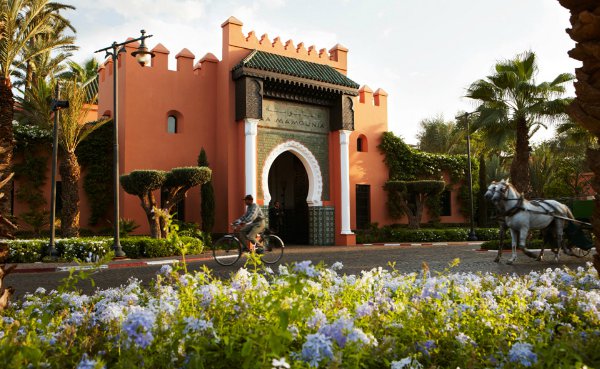 (the hotel, the legend)

If the reader is honest, and especially those living in North America or even the Far East, learning of La Mamounia here will be an interesting experience. At least we hope so. By way of introducing the city that is home to this five star wonder, Marrakech is a place Baby Boomers might identify best from the Crosby, Stills, and Nash hit Marrakesh Express. No doubt, hearing of a fascinating culture “out there” via popular music in 1969, made an indelible mark on hippie culture – but this place on our planet is about far more than leather goods and pilgrims, this ancient city has far more wonder than that. 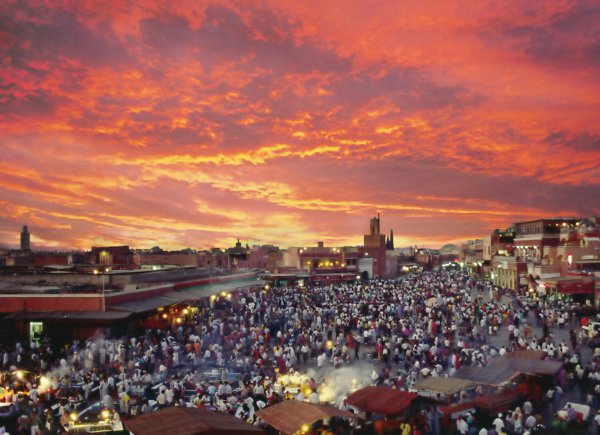 Nightfall on the streets of Marrakech (Daniel BOITEAU - Fotolia.com)

Founded in founded in 1062, Marrakech has contributed its share to history. The conquests of the Almoravids are literally the stuff of legend, but the city is far more widely known of for its seven saints, and as a center for  Sufism (Arabic: تصوّف). For those seeking the inner mystical dimension of Islam, Marrakech was once its own variant of Mecca. Today pilgrims still visit the mosques and hold shrines, but the city’s climate a people have become a feast for the senses and touristic joy, equally appealing to those seeking temperate climate, and so on. But, this article is not so much about this Morocco landmark,  it is about one of the best places to spend a stay in the world. 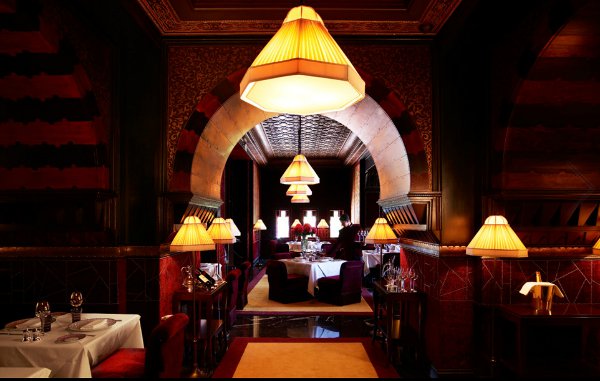 Five perfect bars, meeting facilities fit for any collection of dignitaries, cultural events, adventure, and especially romance, there’s no time for being bored here, but all the time in the world for freeing the mind and body. Imagine an Atlas Mountains high desert picnic via your private Rover. Or, immerse yourself in the luxuriant – take your own private jet, enjoy Champagne breakfast, bivouack in the desert for a night, then delve into the spa and wellness center the next day – end up enjoying your own private fashion show. The place I am speaking of should be slightly sinking in now… 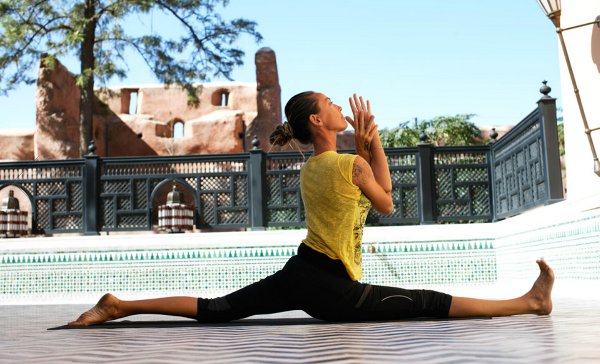 La Mamounia is in a word, splendid. Called a timeless palace by such as world revered designer and architectJacques Garcia, this place beckons even from the vague touch provided via its website. From the hotel’s spa and wellness (image above + bottom), voted the best in all the world last year, to the tiniest imperceptible detail in the works of art on display about the palace – actually, no words really define such perfection, such attention to detail. Four world class restaurants; La Marocain (see menu in PDF form here), Le Français, L’ Italien, and la Pavillon De La Piscine temp and tantaslize every gastronomical fantasy. 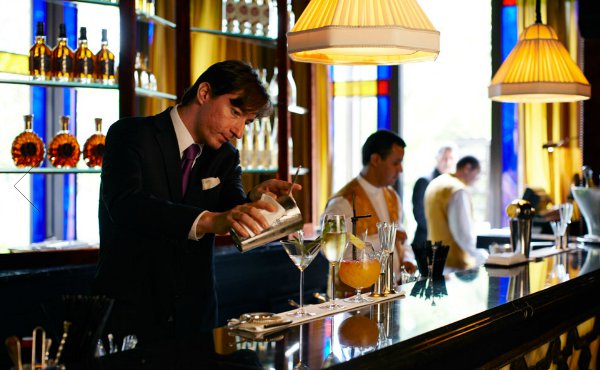 And then there is the famous park.  will not even attempt to reveal this heaven on Earth via images, it is in fact, one of those places you have to see, smell, feel the breeze at in order to enjoy it. More fruit trees than is imaginable, a lush oasis, literally, in the midst of one of the world’s  most exotic places. Bring in the idea of Morocco, the high Atlas Mountains, the Sahara, then garnish your imaginative journey here with Arab and Andalusian crafts and craftsmanship in the adornments of this hotel. It is in fact, a lot more than a hotel. If my words seem overly colorful or enthusiastic here, they are a pale shadow beside La Mamounia’s purpose. 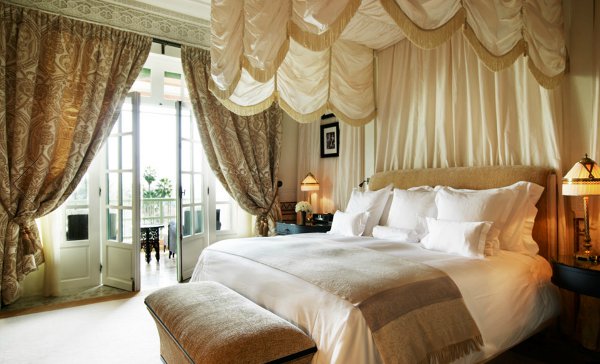 Your suite at la Mamounia

Adrift in all the splendor that the guest absorbs staying here, the solitary moment gazing out at the incredible view of Marrakech’s Koutubia mosque from the bar at La Marocain restaurant, this moment is a snapshot of a lifetime. First opened in

1923, it was Sir Winston Churchill that idolized La Mamounia, saying of the hotel; it was “the most lovely spot in the whole world” in inviting then US President Franklin D. Roosevelt to visit his favorite spot in the world. 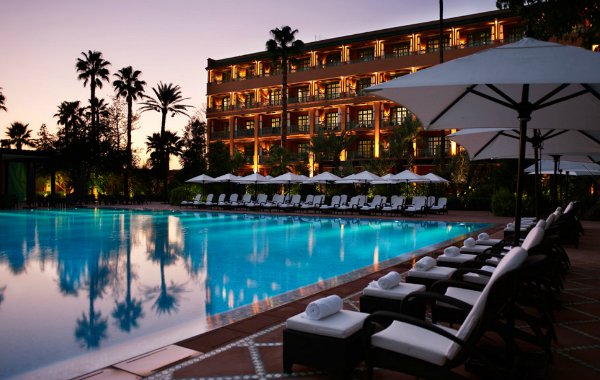 The pool at La Mamounia

The recently reopened hotel underwent extensive upgrade and modernization, delivering 21st Century assurances on a past that is incomparable. Two Michelin Star chefs, Alfonso Iaccarino and Jean-Pierre Vigato now bless a palace that echoes with the footprints of Hollywood legend Charlie Chaplin, Marlene Dietrich, even Kirk Douglas and Charlton Heston, not to mention any rock or pop star who ever was a star – the love affair with Marrakech and this venerable hotel goes on. 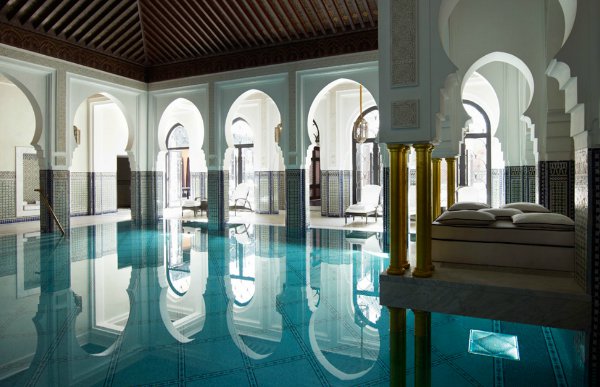 Most of the images within the article are courtesy the hotel’s website or Facebook profile. We wish to thank the hotel for the use, herein.

Campspot Publishes the Top Outdoor Travel Trends for 2023
Ideas to Make the Most of Your Visit to Phuket
Trends Say Americans Guarded Over Travel 2022
27 Inspirational Travel Quotes to Fire Up Your 2022 Travel Bug
Previous: Ski Jumping World Championships in Planica, March 15-18
Next: WIHP Convert Reveals Value to Guests & Hoteliers