In news from Inchon organizers of the 2014 Inchon Asia Games have decided on their mascot – they’ve selected Baengnyeong Island’s harbor seals, Korea’s natural treasures. And in other news from South Korea, a Russian warship which sank in the harbor back in 1904 has apparently become a link between South Korea and the Russian Federation of late.

The 300 guests attending an Asian Games organizing event unveiled the Games mascots and emblem at Songdo Convensia on 4 November, according to the news release. The Inchon Asian Games Organizing Committee (IAGOC) told reporters on hand that the mascot deign was inspired by the seals which inhabit Inchon harbor – and actually travel freely between South and North Korea.

They pointed to the seals as representative of promoting peace in Asia and maybe even easing tension between the two nations that inhabit the Korea peninsula. 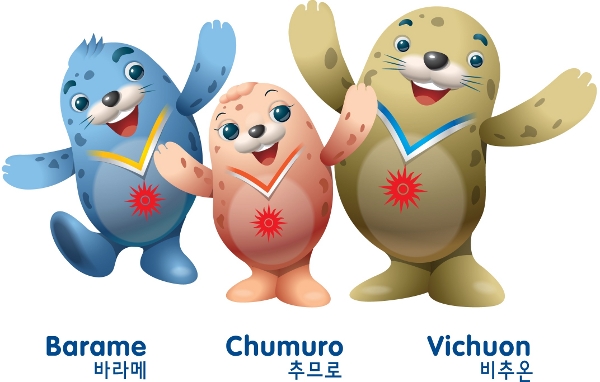 The mascot  characters have been named Vichuon, Barame and Chumuro after the Asian Games’ Main Stadium design motifs of light, wind and dance. Also, the Games emblem design is in the shape of the letter A – projecting the idea of Asians holding hands, flying together, their wings spread – rising toward the sun.

Meanwhile, Russia and South Korea relations took on a positive tone with the interesting announcement of the leasing of the original flag from the Russian cruiser Variag which sank off  Inchon during the Russo-Japanese War back in 1904. According to this news, Russian President Medvedev and Inchon Mayor Song Young-gil were both on hand for a ceremony at the Russian Embassy there to announce the transference and destiny of the Russian heirloom.

Accordingly, the flag will for a time grace the decks of the new Russian missile cruiser of the same name (below), which was anchored in Inchon harbor for the ceremony. 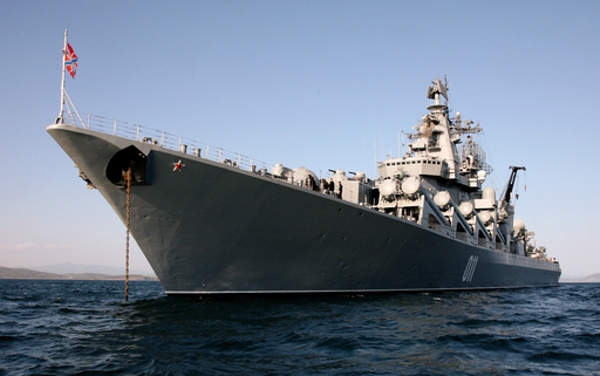 From the fantail of the Variag (Russia’s Pacific Fleet’s flagship), the flag will travel to will go to Vladivostok to meet the warship there for a second raising, and then it will travel by air to the Russian Central Navy Museum in St. Petersburg  to be on display  for the most part.

Those who witnessed the ceremonies said President Medvedev looked very impressed on seeing the over 100 year old relic. Experts also suggested this gesture of friendship might open previously closed doors between the two nations. So, good news all around from South Korea as the Asia Games progress and international détente does too.