Four explosions have rocked the city of Dnipropetrovsk (formerly Yekaterinoslav), Ukraine’s fourth largest city, yet not one of the cities that will host major soccer games during Euro 2012. Ukraine’s General Prosecutor’s Office has already recognized the blasts as a terrorist attack. 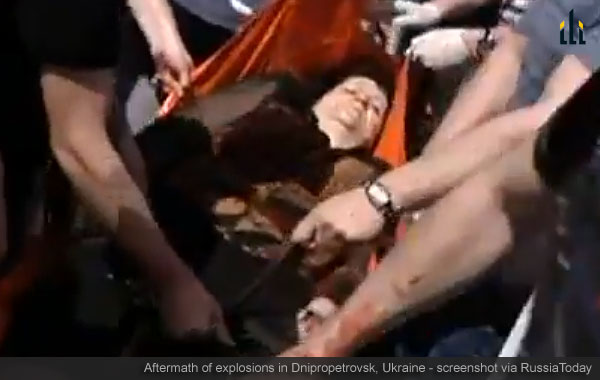 “An attack in our region is something that is very rare, and the Euro 2012 context means we are particularly vigilant about such incidents,” said Polish Prime Minister Donald Tusk, cited by Ten Sport.

However, UEFA officials are not concerned:

UEFA has been made aware of the explosions that occurred in Dnipropetrovsk today and is waiting for the results of the investigation of the Ukrainian authorities into the matter. […] This event does not change UEFA’s confidence in the security measures that have been developed by the authorities in view of UEFA EURO 2012, and which will ensure a smooth and festive tournament.

The blasts injured at least 27 people, 9 of whom are children. According to various media reports, some of the blasts occurred near a central tram stop and a local cinema, all popular areas in Dnipropetrovsk. Russian media has already reported that suspects have been retained, and that the situation is now under control. Video aftermath of the explosions below: