Christmas in Armenia is a mix of history, tradition, and religious belief. Years of life under the communist regime influenced celebrations too.

Christmas in Armenia is January 6

Like Albania, Armenia values more New Year’s Eve celebrations, in the sense that the Christmas party tends to be quiet, more focused on family and belief than on festivity. Santa Claus used to be virtually inexistent a couple of years ago, his legendary figure being replaced by Father Frost during the Soviet years. Recently, the jolly old man dressed in red made his way to local institutions, albeit not successfully enough to be called a mainstream phenomenon. Armenians still exchange gifts on New Year’s Eve rather than doing so at Christmas time.

The local “baboushka” who used to bring presents to well-behaved children before the communist regime forbade the belief in her makes a comeback in rural areas. Another noteworthy aspect is that Armenian Orthodox believers celebrate the Armenian Christmas on January 6, which is the day of the Theophany in Greek Orthodox belief. Still, during the month of December, Armenians celebrate with a symbolic Christmas tree, decorated with fruit and bows in the national colors, red, orange, and blue. The customary decorations in many homes are the white doves that symbolize peace, love, and purity. It is not uncommon to see Christmas trees decorated with such ornaments in many Armenian homes, although trees in public spaces tend to borrow a lot from the West, being rich in lights, lametta, and tinsel.

Traditionally, Armenians clean their homes in time for the Christmas season, out of respect for their homes, for their guests, and because it is an old local tradition. It is also customary for families to arrange small nativity scenes in their homes, to tell the story of the birth of Christ. Although they exchange gifts at New Year’s Eve, it is customary on Christmas day for family members to offer each other flowers, or silver jewelry and other silver objects. Carolers are greeted with sweets, fruit, nuts, and money.

The Christmas meal in Armenia is simple, as many of them fast up to the Armenian Christmas on January 6, when the local Orthodox Church celebrates the holy birth (Sourp Dznount) and the baptism of the Lord by John the Baptist. Traditionalists will abstain from eating meat, so the Christmas Eve dinner will feature dishes based on, fish, and vegetables and rice. They also have special sweets to celebrate the day, including their own version of baklava, or they may serve a nutty pudding called anoush abour. 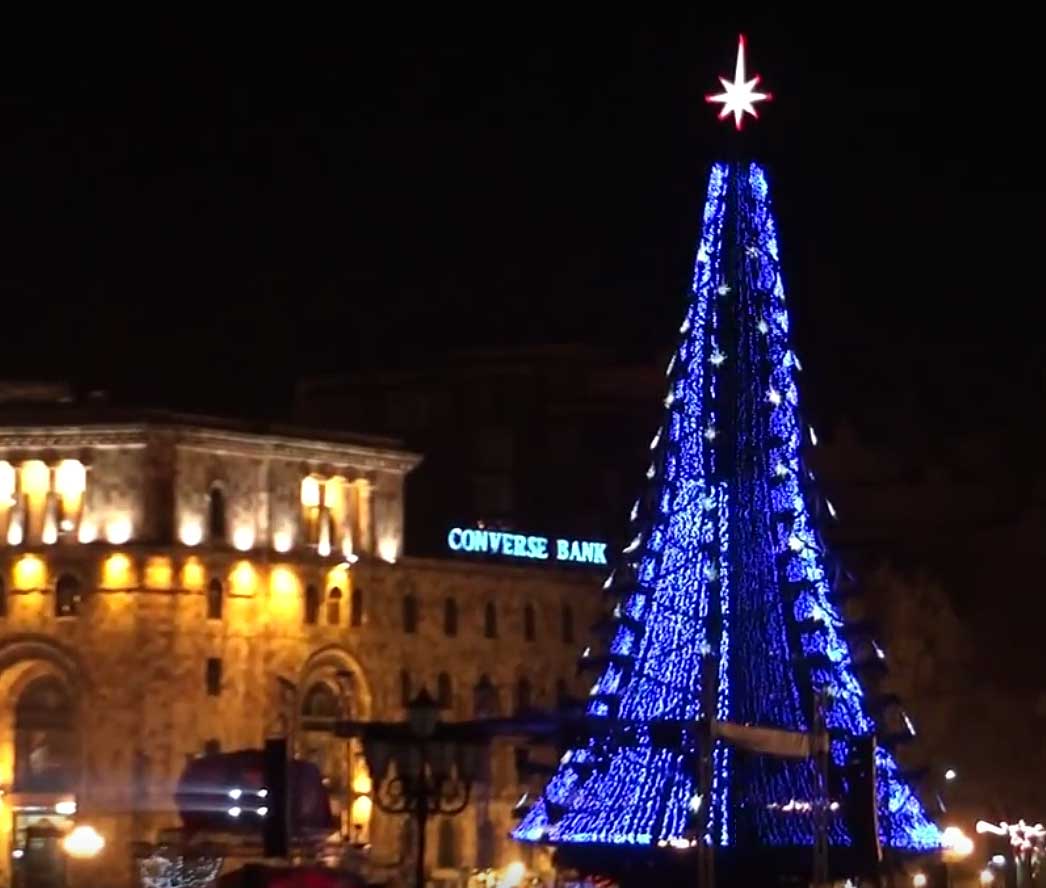 Tourists can still enjoy Christmas on December 25 in many hotels and restaurants that welcome international guests. The Christmas Tree in the Republic Square in Yerevan is always an impressive sight. It is lit shortly before December 25, and marks the beginning of the New Year festivities, with live concerts in the street and fireworks. This is also the time when the festive lights are turned on to brighten the city till mid January 2017.

What If the Secrets of Keftiu Could Rescue Humanity’s Future?
Odd Christmas Traditions Around the World
The Connectedness of Beauty: A Secret of Crete Few People Know
Visit Greece – The Nation That Put the Elderly Last In A Crisis
Previous: Christmas in Albania and Santa Claus
Next: St. Petersburg Wins World’s Leading Cultural City Award