Christmas in Albania and Santa Claus

Santa Claus is Babagjyshi i Krishtlindjeve, Babagjyshi i Vitit të Ri, or Babadimri in Albanian, each name with its distinctive translation: Grandfather Christmas for the first, Grandfather New Year for the second, and Grandfather Winter for the last.

While there’s not enough known about the belief in Santa Claus in Albania, there’s clear proof that they do enjoy the legend of the saint who brings presents to good boys and girls, by the numbers of Albanian tourists peregrinating every winter to the Santa Claus Village in Rovaniemi in the Lapland region of Finland. They also come here in the hope to see aurora borealis in its full glory.

But at home, Santa Claus is not dressed in red and white; he doesn’t live in a village. He is real to believers and non-believers alike, not like the commercialized version that captures the imagination of small children, but like the flesh and blood person that lived in Myra, an ancient, forgotten, Greek town in Lycia. This was Nikolaos of Myra, a historical personality born in Parara, Turkey in 270 CE. He became Bishop of Myra in 317, and died in 345 CE, on December 6th. This is the man celebrated by Albanians as Babagjyshi i Krishtlindjeve at Christmas. Most of them know a lot about the life of the saint and tell stories about him at Christmas time. The Santa dressed in red is a matter of debate. While not rejected by Albanians, many worry about the “moment of truth” when children discover that the man with the sleigh and the reindeer is not real.

It is interesting to know that although the country is split between Muslims and Christians, Christmas is an occasion to bond with family members and friends over traditional foods – mainly fish and vegetables. The family is central to Christmas in Albania. It is customary to have dining tables covered in the best tablecloth, the one that only comes out at a special occasion, and the best china. The centerpieces feature traditional seasonal delights, like Bakllava shqiptare, their tasty Christmas pie made with filo pastry, nuts, and honey.

However, Christmas is not the same in Albania as it is in other countries. The exchanging of gifts usually happens at New Year’s. December 25th, Krishtlindjet, is a public holiday in the country, and besides gathering around the table to enjoy traditional dishes, Albanians may also go to the midnight mass. They greet each other with Gézuar Krishlindjet! (Merry Christmas!)

Because of the Ottoman occupation, and years of communism, Christmas in Albania was replaced by a secular New Year’s celebration. It is unclear why, after the fall of communism, Albanians didn’t embrace the commercial version of Christmas like other Eastern European countries, but they just didn’t. They do take time for family, very few exchange gifts, but they do exchange shop-bought candy and chocolates, and wine. Most of them prepare their homes for the New Year celebrations, perhaps the true Christmas in Albania. Compared to the New Year’s Eve, Christmas is quiet and laid back in Albania. Even the Santa run happens at the end of December. 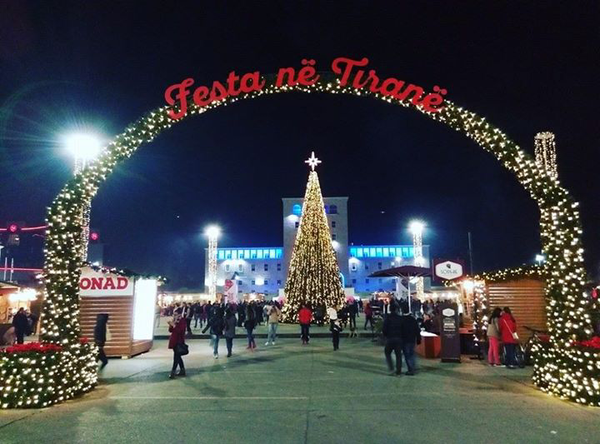 Still, the Christmas tree in Tirana shines with hundreds of lights all through December, making a familiar setting for expats who miss the colorful Christmas displays from the West. For Christmas music, the “Resurrection of Christ” Orthodox Cathedral in the center of Tirana is always a popular choice. There are also hotels and bars that add to the Christmas cheer for tourists.