Atletico Madrid and Athletic Bilbao, the two UEFA Europa League finalists will meet on May 9 at the National Arena in Bucharest, to play the European match of the year. 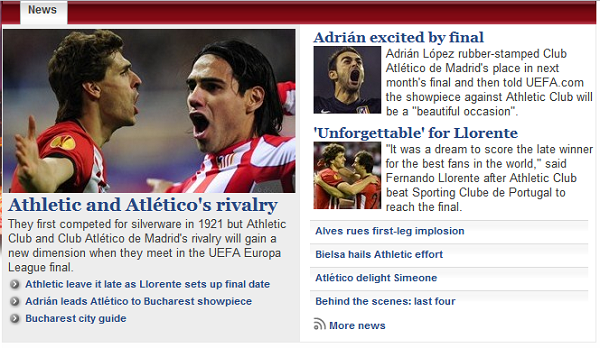 After a memorable semi-final on San Mames Stadium in Bilbao, Athletic won 3-1 in front of Sporting Clube de Portugal, ensuring its place in the last battle for the trophy. Man of the game, Fernando Llorente scored just two minutes before overtime. After 90 minutes full of emotions, tension, excitement and fatigue, the Basque team proved why they deserve to play this year’s final in Bucharest. At the end of the game, Spain’s national team player, Fernando Llorente burst into tears saying: “This is the most important night of my career!”

After the tour’s 4-2 victory against F. C. Valencia, Atletico Madrid managed to qualify through Adrian Lopez’s decisive goal on Mestalla Stadium. The bad news is that Los Rojiblancos will perform in the grand final without captain Tiago, eliminated in the 79th minute of the last dispute, after receiving a red card.

One step away of owning the supremacy in European football, Spain lost its big favorites FC Barcelona and Real Madrid after two thrilling semifinals.

However, Spanish fans’ disappointment did not last too long as few days later, two other major teams from “La Liga” – Atletico Madrid and Athletic Bilbao have proved that quality football has never left the Iberian Peninsula, still holding a leading position in Europe.

“Europa Spanish League” or “Europa Rojiblanca” as it was called this year’s edition of the prestigious European competition by newspapers such as “Marca” and “AS” is set for a spectacular final on the National Arena in Bucharest, where many personalities will be present, including the son of King Juan Carlos of Spain – Prince Don Felipe.

Beyond the fight for the heaviest trophy of all UEFA silverware, the two Spanish football teams’ rivalry will gain a new dimension at the National Arena in Bucharest, where they will not only play the grand final of Europa League, but also the second Spanish “El Cassico”.

Warning: sprintf(): Too few arguments in /homepages/11/d423852027/htdocs/argophilia-com/news/wp-content/plugins/wp-user-avatar/includes/class-wp-user-avatar-functions.php on line 478