Bing Travel Down Another Notch On Farecast Death [Or Is It?]

Is Bing bringing on Bing Travel the app?

Bing, the only search entity out there that stood a chance of competing with Google, has sent to the dead pool Farecast. What was one of Bing’s most interesting tools is another casualty of what some experts say is an apathetic Microsoft when it comes to search.

Is MyCityWay the “next” way in mobile?

Years of unrewarded effort by Microsoft to overtake Google in search have seen one initiative after another fail to convert users to Bing. Even though most would proclaim the MS search engine prettier, cooler, and in many cases more accurate that its competition, somehow people just refuse to switch. Now the airfare price prediction tool, a favorite for frequent vacationers and business travelers, has faded into the sunset.

Bing, not unlike Google, has spent untold millions attempting to provide cutting edge services for users. More critically, those untold millions have often been for naught, as is the case for the $115 million MS paid for the Seattle-based Farecast six years ago. To quote Tnooz:

“Two-and-a-half years ago, while Bing’s homepage today kept a Travel link at its top, Bing Travel had almost ceased to exist as an organizational grouping within the corporation.” 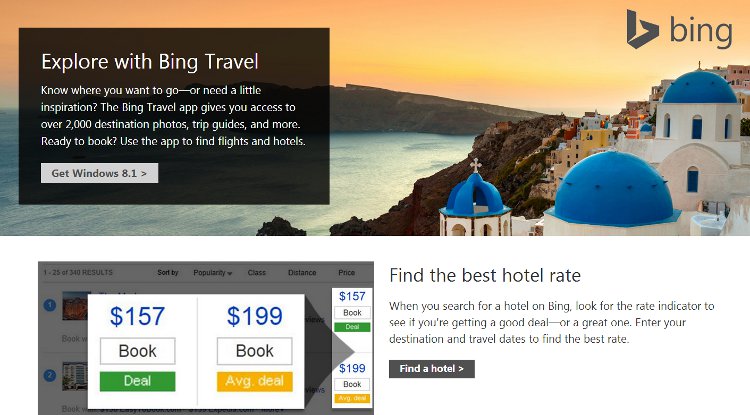 Is Bing bringing on Bing Travel the app?

Given the near invincibility of Google where desktop search is concerned, isn’t it advisable for Microsoft and Bing to venture farther into mobile search, mobile travel innovation? Speculatively, when one takes a look at what Bing has done visually to organic desktop search, the absence of travel as a predominant component may have other meaning. When I searched for Bing Travel a few moments ago, I was directed to a page advertising the Bing Travel App (as above), maybe Microsoft’s best chance to “one up” Google, when all is said and done.

I’ve harped before about the app game and a lack of real players in the arena there. And even with Bing’s boss Stefan Weitz. Looking at Farecast from an operational standpoint, just how cost effective or useful was the tool? If Bing is headed off deeper into the instantaneous world of mobile users, being able to predict a flight price 6 months from now is just going to be fluff. What will not be fluff will be the thousands of places, people, and things no traveler at this juncture can access from one app. Sorry to say, nobody has zeroed in on travel applications that really rock. Then there’s this report on the name “Bing” being dumped from most all Windows Phone Apps. Is Microsoft headed for a search rebrand?

Then again, maybe NOT. Interestingly, there’s not even a link to the Windows App store on that ad page up yonder! Curiously, Bing has chosen to advertise and link to the Windows 8.1 OS instead of promoting the travel app? Then there’s the fact the Bing App (like so many MS products) is MS-centric period. To be honest, Bing and Microsoft act as if they could care less about converting new users to their products. This is reason to believe my “vision” for them amounts to barking up the wrong tree. With a vacuum formed over the travel app world, it seems like some of those wasted millions out there should be diverted to filling the void.

I’ve got a call in to Stefan Weitz, we’ll try and see what’s in store this or next year. After that, surely somebody else will have seized the day. (example: Viber was all the talk on our trip to Crete – MS/Skype may soon be surrounded by competitors)

Can Airbnb Continue to Expand as Before?
Hopper Taps Into Hostaway Client Base in Lastest Strategy Move
AI-Powered Pathfndr Announces a Slew of New Features
“Wheel the World” Hurdles Travel Barriers for Travelers Using Tech
Previous: SWISS Ramps Up Summer Flight Schedule
Next: The Island of Rhodes: Becoming a Second Home Haven