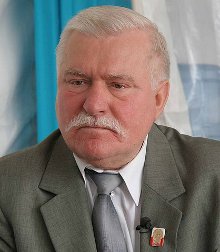 Today all Poland celebrates the 32nd Anniversary of August Agreements, the 1980 declaration of Poland’s emergence as the first independent trade union in the former communist bloc. President Bronislaw Komorowski will reportedly be on hand to present awards to some 40 activists of the Solidarity Trade Union.

A special Mass will be held at St. Brigid’s Basilica in Gdansk intended as the centerpiece in a nationwide celebration, Lech Walesa (upper left) is scheduled to attend. Already this morning, flowers were laid at the foot a Monument erected to honor the fallen shipyard workers who lost their lives in protest at the Gdansk shipyard. 1200 pigeons took flight to signify those activist’s sacrifice.

Also scheduled for today, the exhibition, “Anna Walentynowicz. + Legend + Solidarity 1929-2010, will open. Prepared by the Institute of National Remembrance the event pays tribute to the Solidarity movement, and to those who died in the Smolensk air disaster in April 2010.

LATO Fair of Tourism and Recreation in Warsaw Next Week
Warsaw in Chopin’s Footsteps
Picture-Perfect Places to Propose in Poland
Warsaw, Capital of Cool 2017, Is a Summer-Must in Poland
Previous: Le Méridien Limassol Debuts Presidential Suite
Next: Belarus and Mogilev Host Asalodki-2012