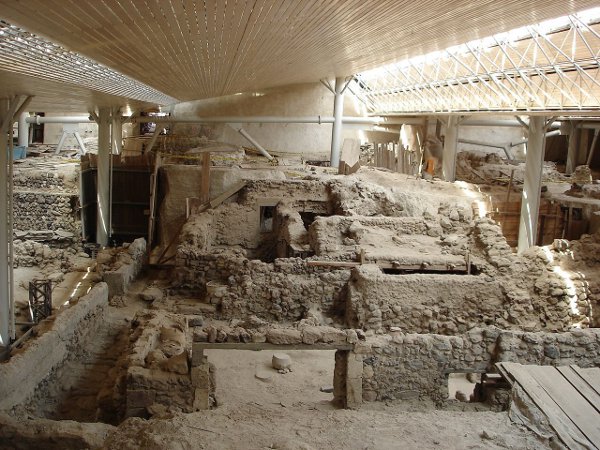 When the Island of Thera (Santorini) exploded in a monumental volcanic event 3,700 years ago, all of the Mediterranean felt not only the physical shuddering of the Earth, but a cultural calamity of enormous proportions. Thera, at the time, was thought to be as advanced a civilized place, some say even Plato’s Atlantis, as to have had influence on the entirety of the ancient world. In an instant, all that culture, advancement, all those people, vanished away forever.

It is said the eruption of Thera caused the fall of the fabulous Minoan civilization of Crete as well. As for Santorini today, what most tourists stand in awe of is but a pale shadow of what Thera must have looked like before disaster. The quaint buildings you see below, cling to the side of what was certainly the foot of a great mountain. 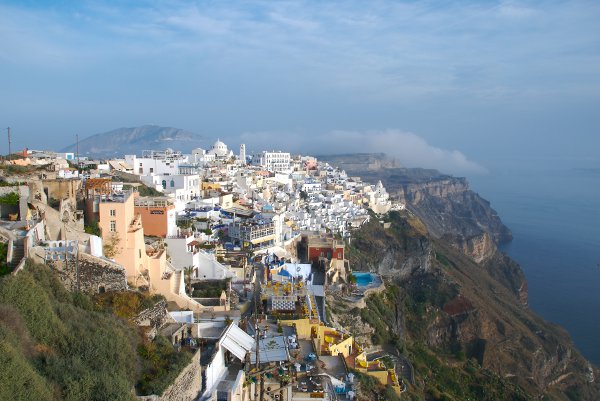 Akrotiri, one of the earliest settlements of any kind, was founded somewhere around 3500 BCE. Given the advancements archaeologists found there in engineering, art, and the evident reach of Bronze Age commerce to and from Thera, it is clear Akrotiri was not only well advanced during the Bronze Age, but in commerce with Crete, the Greek mainland, Dodecanese, Cyprus, Syria, and Egypt, at the very minimum. The golden Ibex pictured below is purely of Cyclades origin, and the only gold item so far found at Akrotiri. Imagine too, this was hammered out over 4000 years ago. 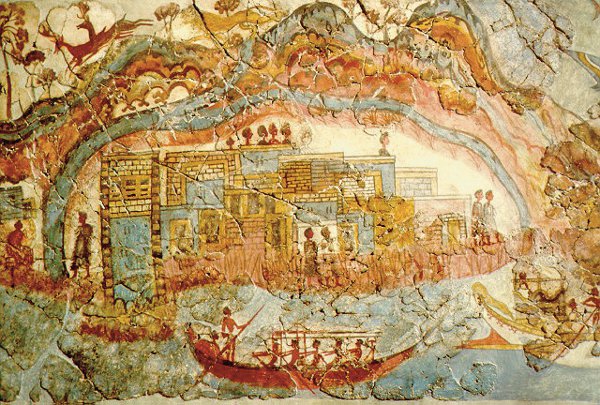 The digs at Akrotiri are considered some of the most important finds in modern times, and with the re-opening of the site visitors will be offered again a window into a marvelous time of man. The early Bronze Age is literally the advent of the emergence of mankind from Stone Age insignificance. The Minoans who settled at Thera, from the frescoes painted of them at Akrotiri, were a vibrant, creative, and refined lot. When the inhabitants of the city abandoned it just before the eruption in 1600 BCE (radiocarbon process), the left a hometown as fine and ornate as any imaginable. As you can tell from the section of fresco pictured above, the Minoans of Akrotiri flourished at a time when the world lit fires in huts and caves to stave off the elements.

As for the eruption itself, recent research suggests Thera’s demise may have been the most powerful volcanic event in mankind’s timeline, up to 5 times more powerful than the legendary Krakatoa event. Dr. Robert Ballard, of Titanic fame, sent his famous remote rovers beneath the waves at Santorini in 2006, to discover layer upon layer of volcanic events at Thera. The eruption that doomed Akrotiri, in all likelihood, changed human history forever. It is estimated that literally miles of this Island was catapulted into the stratosphere by the explosion. Undoubtedly too, massive tsunami events must have occurred. 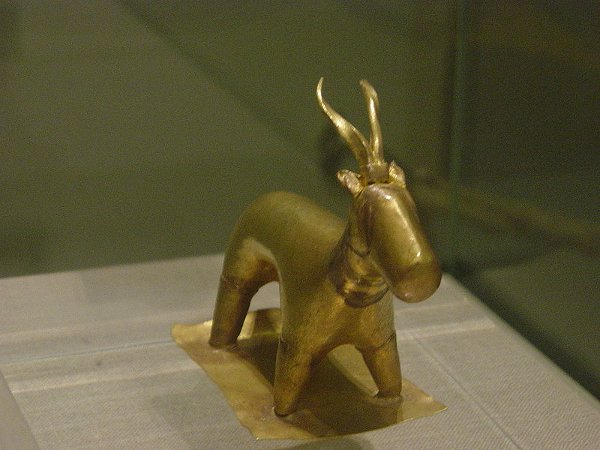 The fact that Akrotiri even still exists is miraculous, given the proportions of the Thera  volcanic explosion. If one looks at Santorini from an aerial perspective, its clear that a very large Island once existed inside the crescent shape that remains. What is most significant about this place on Earth, is not simply that natural catacylsm cuased devastation, but that real people lived here. People who, at a time and place where mankind was little more evolved than ape ancestors, created beautiful things. The Minoans sculpted from wood, clay, stone, and metals objects of incredible beauty. Not only this, but their art reflected their view of the world too. You can see in their creations a people that reveled in the beauty that surrounded them. From the dolphins they so lovingly painted, to the self portraits of their youths, hair braided, fine textile clad, bold and smart humankind basking in the Aegean sun.