World’s Biggest Ever Exhibition of Vatican Art Comes to Moscow

The largest-ever exhibition of masterpieces from the Vatican’s Pinacoteca entitled ‘Roma Aeterna. Masterpieces of the Vatican Pinacoteca’ now graces the Engineering Building of the Tretyakov Arts Gallery. Never before has such a large exhibition of paintings been allowed outside the Pinacoteca (470). Running from November 25th thru February 19th of 2017, this is an unprecedented display of some of the world’s most coveted artworks.

Barbara Jatta, a deputy director of the Vatican Museums, said the museums had never in the past let such a big number of exhibits to be taken for display outside the Pinacoteca. The treasures of the Vatican Museums rarely leave their walls, so that the exhibition will be an event not only for Russia and Europe, but also for the whole world. The exhibition will show the works of XII to XVIII centuries, including the paintings by Raphael, Caravaggio, Bellini, Guercino, Perugino, Poussin, Reni. 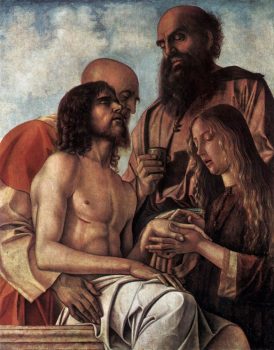 Some 42 of the works on display date from the period of the 12th century through the 18th century. Works such as ‘Christ Blessing’, an icon of the Roman school, are iconic of the early Russian icons of Christ Pantocrator. These paintings reflect on the epoch of the unity of the Holy Christian Church before its split into the western Roman Catholicism and Eastern Orthodoxy, according to Russian news agency TASS.

Other paintings exhibited in the Tretyakov Gallery create the impression of a conversation such as that which exists in between the landmark artists of Venetian Renaissance – ‘La pieta’ by Carlo Crivelli and ‘Mourning of Christ with Joseph, Nicodemus and Mary Magdalene’ by Giovanni Bellini.Tretyakov Gallery director Zelfira Tregulova told the news agency, the museum had tightened security measures for the whole duration of the exhibition:

“There will be more staff in the halls and also a duty officer from our security service will always be on the spot. In addition, we’ll step up the checking formalities at the entrance and reinforce the police posts there.”

The security measures in place have caused all the entrance tickets for the exhibition have been bought up through to the end of December. The next batch of tickets will go on sale on December 15.