The Truth of Knossos: Discovering What the Eteocretans Knew 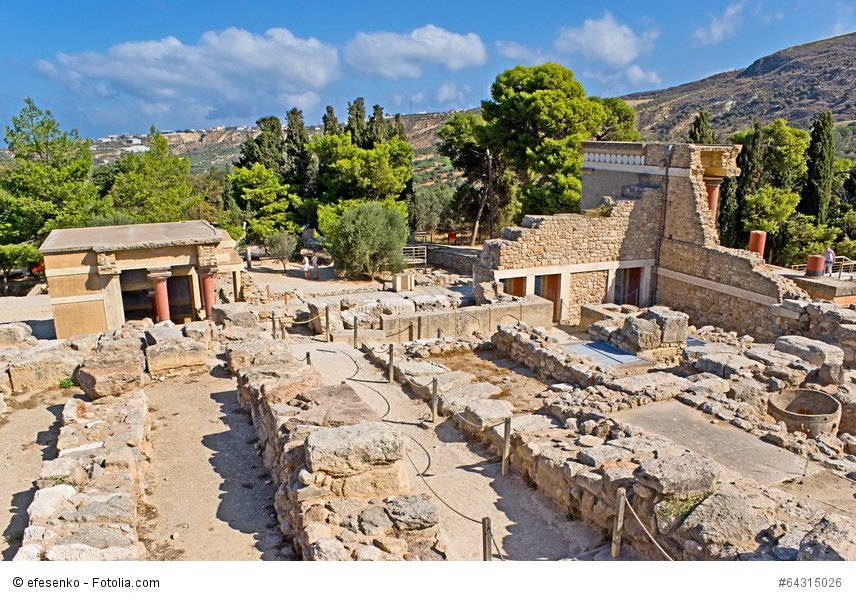 Entering the site at Knossos for the first time, I was immediately captivated by an unexpected experience. The 70s-ish architecture in the welcome area outside the palace, these too spoke to me from a special place. Knossos, you see, it’s one of those sites one cannot forget, but for mysterious reasons. Let me show you a bit of one of Greece and Crete’s most underestimated treasures, the lost and found Palace of the Minoan civilization. Trust me, a journey into the history of this place to 7,000 years ago and beyond, is so far past nostalgic heydays.

I’ll never forget the friendly Cretan at the welcome center cafe. A wise beyond his years young man of 20-something quipped half-jokingly; “You’ll enjoy the magnetic fields too.” But as I said, he was wise, and he did allude to Knossos’ mystical quality appropriately. For those so attuned to the ancient Minoans who lived here long ago, echoes of the Eteocretans can really still be heard. But let me first relate the majesty that is King Minos’ palace. 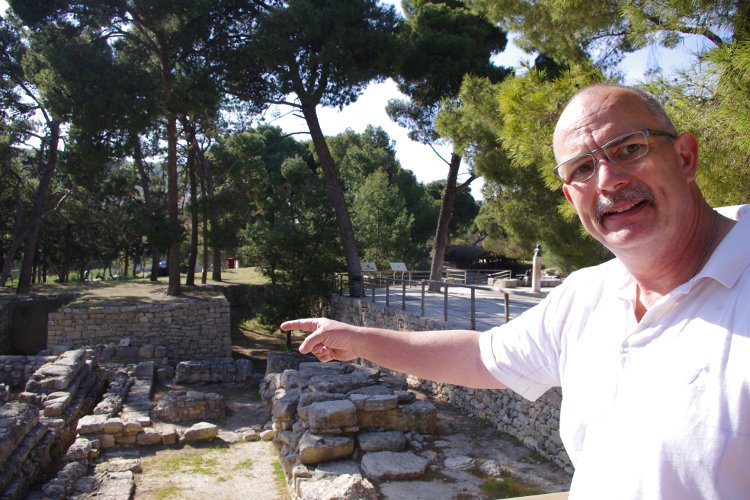 Set in a picturesque high valley, overlooking modern Heraklion, the Palace at Knossos is as serene a place as you can possibly imagine. Entering the palace grounds from the west, the visitor to Knossos will undoubtedly be taken in by the setting, first of all. The ambling stone walkways, and later added boardwalks that protect the ruins blend in with an idyllic evergreen forested valley. Plaques and the statue of Knossos’ lead evangelist, archaeologist Sir Arthur Evans, these informative bits dot the site. But it’s not the tour guide, nor the multimedia presentation that gets you here.

Shadowy reminiscences, a gentle wind blowing across cedars, down into the labryinth that is the palace, everywhere eons of time whisper. Not to sound “oh so” ethereal here, would be almost sacrilege for a student of antiquity. The Minoans were, perhaps ancient humankind’s most civilized people. One can sense this at Knossos and other Minoan sites. What most experts classify as an organizational or administrative center, is far more than that. At the heart of all things Minoan, society became religion, and vice versa. This too, can be seen and felt roaming the palace grounds. One only has to daydream, just a bit, in order to become Minoan for a scant moment.

Of course it’s easy to see the administrative import of this place, the great magazines (as below) with their giant pithoi for storing olives and other agricultural treasures, these make sense for any great palatial site. For me though, these bits and pieces of Minoan administrative and functional necessity are the least of those great people’s world. What the capacity and thinking along these lines does suggest, is that eons before Rome was even an idea, an island people as old as time began to thrive in our world. But there’s a lot more to Knossos than big olive oil cans, if you’ll excuse the tongue in cheek. 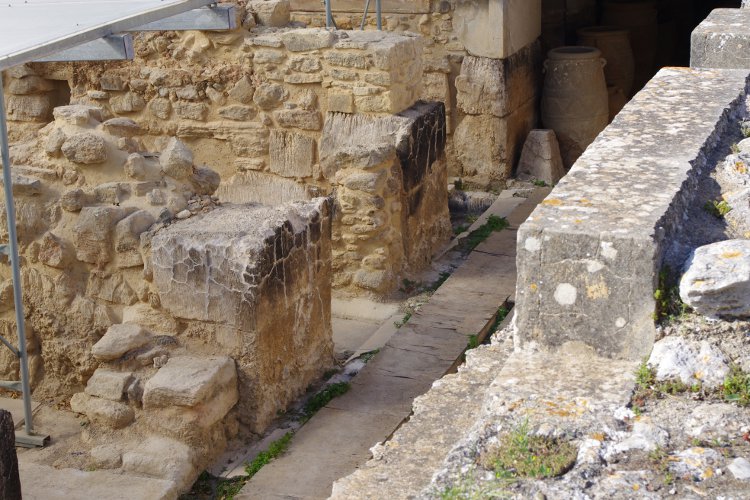 At Knossos there’s evidence of a great society in every aspect, organizationally, and practically, the magazines only make sense.

Nowhere on the palace grounds is the essence of Minoan life here felt more strongly. The so-called The Tripartite Shrine which my son Paul-Jules and I are observing the the picture below, it’s where the main sanctuary in Knossos was. Situated just south of the Throne Room, this is were the now legendary “Snake Goddesses” was discovered among other treasures. This “goddess” holds immense importance where this ancient Cretan civilization is concerned. 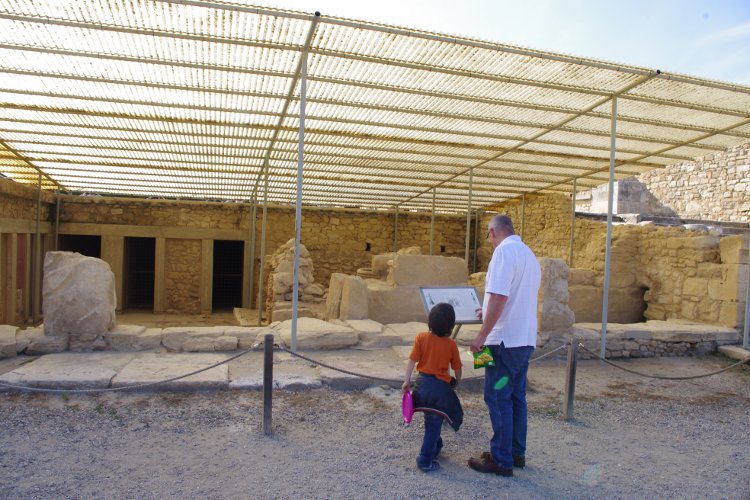 The Tripartite Shrine is the main sanctuary in Knossos.

Remembering my Plato, and recollections of the Amazons, it’s a natural progression to consider Minoan society as the forebears of such legends. Many agree, woman and men shared equal status at Knossos and across the maritime empire of the Minoans. In fact some historians claim the priestesses of Knossos ruled the hearts and minds of the world’s most advanced Bronze Age people.

But on to more subtle intricacies of this place, the Prince of the Lilies fresco, this further encapsulates a people in love with nature, and beauty in themselves as well. The image below also gives you an idea of the landscape from which this great people looked out onto their world. 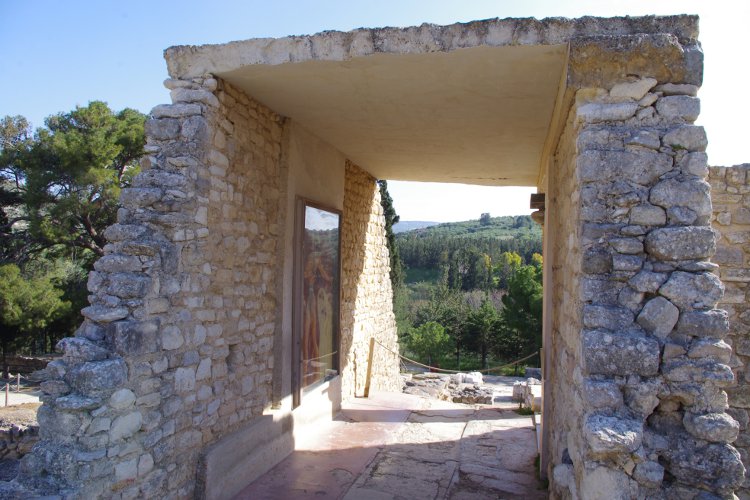 The Prince of the Lilies fresco, inside and to the left, was undoubtedly bathed in light, a predominate feature of Knossos is the play on light, and the massively colorful artistry here. When the palace was whole, architecture and light intermingled.

Past the Throne Room (pictured below), the Horns of Consecration, up and down the stairways, and naturally fascinating landscape, Knossos is revealed more as a way of life, than a place. The people who lived here, ancestors of the friendliest islanders I ever met, they were special, to say the least. What struck me most poignantly about this place, I mean besides the rather condensed cultural-architectural manner of Knossos, was the feeling of being at the center of something more than just a great ruin along humankind’s evolutionary story. For the time they were here, the Minoans really did live the ideal life. This idea is intensely prevalent here.

Again I deviate into the normative and spiritual essences of things, but that’s just what Crete extracts from visitation of more than a couple of weeks. It’s easy to see why so many people visit, and never leave. Every day I regret in a way our family getting back on the Aegean Air airplane for the trip back to Germany. But that aspect, is entirely impossible to convey. 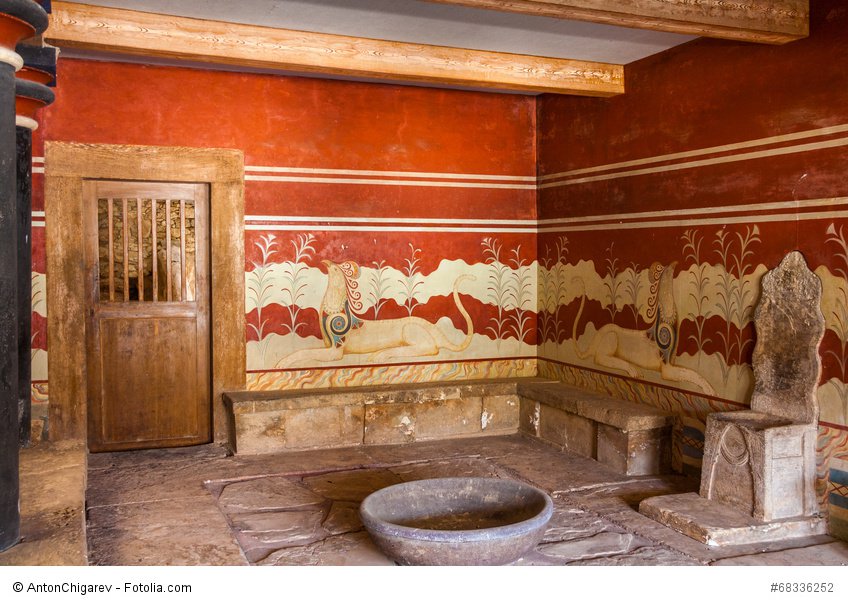 Conjuring what my young friend at the Knossos entrance foretold, some form of asymmetrical force field within the site of Knossos, this is not feasible for reviewing an experience on our travel news. I mean, you cannot physically feel yourself being pulled back to the land of matriarchal society, to the place Icarus and Daedalus confronted the eternal. But I can intrigue you a bit more with my last glimpse of Knossos, looking down the world’s first paved highway, the Royal Road (as above) I could not help but wonder at there these people, where mighty Atlantis went to… 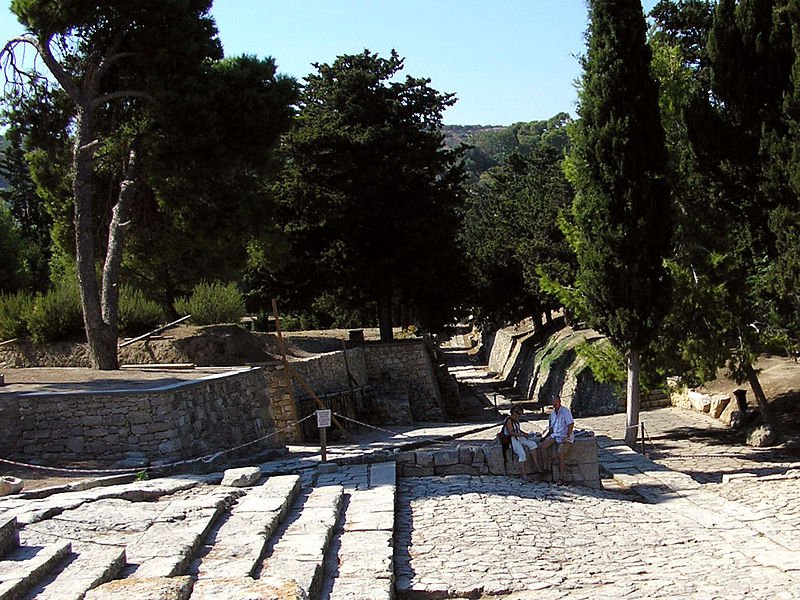 The Royal Road west from Knossos toward Rethymno – courtesy Corvax

Maybe the disappeared high atop the nearby mountain in Karfi (or Karphi), the last stronghold of a Cretan civilization that needed no army to defend itself in a violent Bronze Age world. Maybe the other end of this Royal Road led to the Dikti Mountains, to some still as yet undiscovered secret, some mystical place that holds the clues to the undecipherable language of these people, Linear A? Maybe the Royal Road, or some other passageway leads to discoveries no one imagines, not even me. Maybe the last of the Minoans escaped the warlike Greeks of Mycenae, and sought the goddess Britomartis, high in her cave not far from Karfi. Maybe today’s Cretans are direct descendants of a resilient people we never really understood? Somehow tied to the land like the aforementioned goddess of the mountains and hunting.

This would explain a lot, you’ll see, when you discover all that Cretans love (I won’t tell). But that is a story best experienced in the first person, and then spiritually. I leave you with a spiritual trip to Incredible Crete. You have to go here.

What If the Secrets of Keftiu Could Rescue Humanity’s Future?
Odd Christmas Traditions Around the World
The Connectedness of Beauty: A Secret of Crete Few People Know
Visit Greece – The Nation That Put the Elderly Last In A Crisis
Previous: Marathon Asset Management 11 QMH Hotels
Next: This Week Sziget Festival “Island of Freedom” Beckons