According to Wikipedia, Super 8 is the world’s largest budget hotel chain. It’s immensely popular in the United States, where there are over 2,000 locations. However outside the US and Canada, you will only find a small handful in China.

Well all that is about to change, as Super 8’s parent company (Wyndham Hotel Group) has embarked on creating an European footprint. One of the very first countries they are focusing on is Poland.

The news came last year, when Wyndham signed a deal with Colliers International (a real estate company) who has committed to opening “at least” ten Super 8 hotels in Poland by 2016. It was one of Super 8’s first international development contracts, taking place long before Germany and other European countries.

Given the state of the world economy, the timing couldn’t be better. The reason Super 8 is so popular in the United States is because they are economically priced. In fact, when the first location opened in 1973, the daily room rate was USD $8.88 (and hence where the name came from). Of course due to inflation, the price is much higher now, but their rooms are still very reasonable priced; often fetching no more than USD $60-90 per night. It has not yet been announced what the pricing for the Poland locations will be, but it’s safe to conclude they will be very affordable. 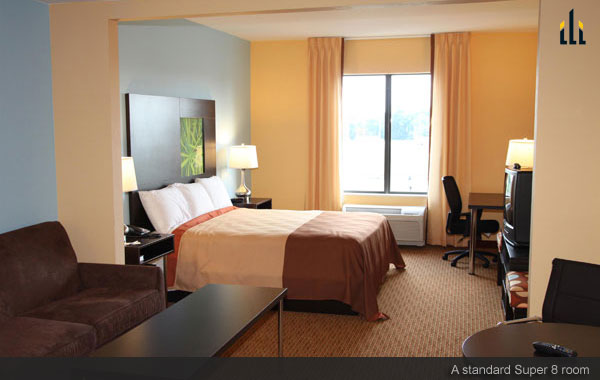 For American tourists traveling to Poland, these hotels will provide a taste of home since almost all the locations have very similar room layouts and decor. The amenities will follow their “Eight Point Promise” which consists of the following:

1. Cable or satellite TV for no additional charge
2. There is no extra fee for kids traveling with their parents/guardian
3. No cost Wi-Fi internet access
4. Reservations made through Super8.com are guaranteed to be the best rates
5. Guests will get a free continental breakfast each morning
6. Coffee will also be available for free in the lobby
7. There will be ports for USB charging in every room
8. They will be part of the Wyndham program for credit card/loyalty rewards (more on that below)

Perhaps the main reason Wyndham chose to focus on Poland first is because of the country’s strong economy. Many of Super 8’s guests are business travelers, so it’s logical why emphasis would be placed on Poland.

But whether you’re traveling on business or pleasure, these new locations will participate in the Wyndham Rewards program. With over 6,500 hotels participating, it is the largest hotel loyalty program in the world. It allows members to earn points when they stay at Wyndham properties and/or use the Wyndham Visa credit card for purchases. So that means participants will soon be able to earn (and redeem) these points at all the planned Super 8’s in Poland.

Unibep Group, which is a Polish company, will be responsible for the construction of the first ten motels. Their exact locations haven’t yet been announced, but keep an eye out for the news as the project progresses.

About our guest author: as editor-in-chief of CreditCardForum and an avid traveler himself, Michael Dolen constantly stays on top of the latest airline and motel credit card developments.

LATO Fair of Tourism and Recreation in Warsaw Next Week
Warsaw in Chopin’s Footsteps
Picture-Perfect Places to Propose in Poland
Warsaw, Capital of Cool 2017, Is a Summer-Must in Poland
Previous: Hôtel des Académies et des Arts: Paris Art-form
Next: A Sad State of Affairs on the Romanian Littoral