Roomkey: On the Verge of Success & Failure At Once

Exit marketing is a slippery slope akin to being user pirates Roomkey with popups to capture users?

Exit marketing is a slippery slope akin to being user pirates

Roomkey. If there were ever a more appropriate name for a hotel booking channel, a more symbolically significant potential for branding, that would have to be perfection. Roomkey.com actually does have that possibility. But, like all great ideas and initiatives, the big time hoteliers’ 3rd interjection of intelligent engagement, has it’s problems too. There’s room for lots of niche products in travel, but is Roomkey an escape hatch or a marketing channel? And if exit marketing is introduced, even niche traffic and conversions could be scared away. 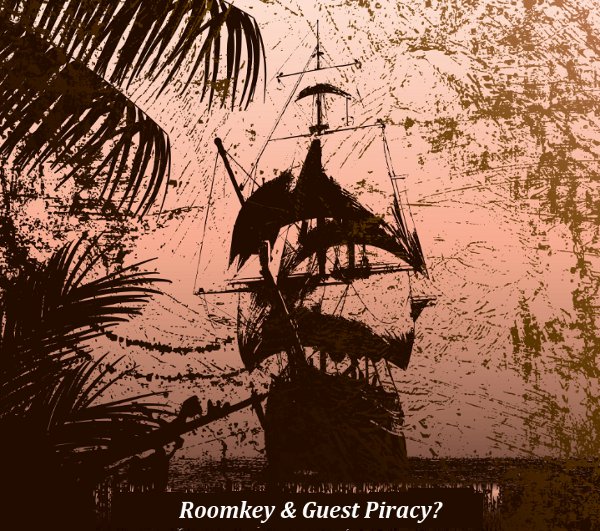 Exit marketing is a slippery slope akin to being user pirates

Roomkey.com launched back in January to a bit of buzz, we even threw our opinion into the mix here. Our feedback then was only really negative where localized hotel searches were concerned. The interface, look of, and concept was and is, very nice. The choice of booking on site or via the hotel’s direct web presence, this is maybe the best thing Roomkey does. Revisiting the site to look about some more, I just happened to do a search for a friend for Luxembourg City too. In so doing, I managed to stumble across what Choice, Hilton, Hyatt, IHG, Marriott, and Wyndham surely hate about their new channel – and love – the absence of competition. 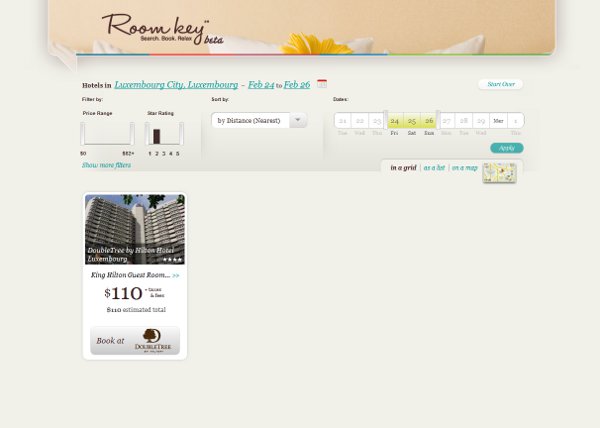 Screen from Roomkey for Luxembourg booking

It’s a bit funny though that even using the experimental Google Hotel Finder, which by the way is not supposed to work outside the US, provides varied list of some 139 hotels across our border in Luxembourg. This is no surprise really. TripAdvisor, TripWolf, even the “top picks” on NileGuide do a better job helping travelers get a decent night’s sleep in the city. Roomkey proponents would point to the beta’s newness here. For me the absence of any major independent hotel presence is endemic.

The screen below shows off what this new distribution/visibility channel is good at – that’s providing super relevant data and connection between potential guests and suggested hotels. I emphasize “suggested” because this has been the biggest rub on the Internet since Web 2.0 started. There’s a huge question that Google and a host of other entities have tried to answer; “How to serve up the likes, wants, and needs of users?” Suggestion engines, algorithms, human powered search engines, straight up advertising, Roomkey has the same dilemma. 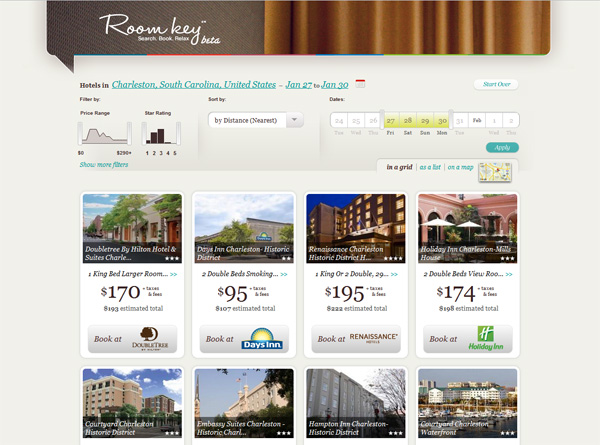 What Roomkey excels at, showing off hotel inventory and key data

Roomkey’s biggest problem is a lack of agnosticism. Alissa Ponchione’s article at HotelNewsNow opens the discourse over whether or not Roomkey.com can channel more support, and/or branch out to support the industry online. Some key proponents and opponents are presented there too. While many supporters and neutral parties pull the “young startup” card to prop up Roomkey’s lacking independent hotel inclusion, the fact is CEO John F. Davis III and the hoteliers behind this move had the resources and time to include many more chains and boutiques. Either they could not, or deemed those smaller entities unworthy for this reason or that.

Another thing that seems conflicting here is how our own energies directed at Tom Magnuson’s Global Hotel Exchange, along with those of other industry innovators, seem to be viewed as being competitive – almost as if anything the giant corporations don’t come up with HAS to be of an enemy. The reverse is actually true, believe it or not. The simple fact of this matter is, “there’s plenty of room for a lot of booking players” – just as there has always been. Look at Roomkey, Global Hotel Exchange, Expedia, and a wildcard like our friends over at Stay.com. If the big hotels, the big OTAs, the GDS players are not engaged in driving out any competitors, they sure seem resistant to new ideas to me. 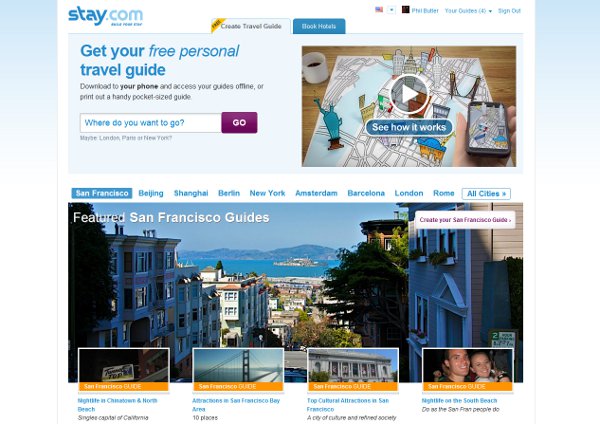 Stay.com - for planning and sharing places, people, and memories

Roomkey is merely an extension of these 6 big hotel’s websites. In all probability, this is all it will ever be (plus or minus some others). And there’s nothing wrong with that – Roomkey gives people who are brand conscious fantastic value. Now, for Expedia, it seems clear the worst corporate nightmare imaginable has already unfolded – market share is going to be lost. Does this mean Expedia will sink like Titanic? Not if the board makes the right decisions – Expedia actually has massive potential still (pay the man to learn this). Ditto goes for Travelocity and the GDS peeps. As for what some term “rich online experiences” – there’s Stay.com and the NileGuides of the web.

Stay.com’s market is completely different from Roomkey’s, Hilton’s, Expedia’s, and especially Global Hotel Exchange’s. It’s always funny to me why so many fail to see the real dynamics of business on the web, especially in travel. Just as TripIt sits over there making money in their business class niche, so too Stay.com and some others quietly rake in cash providing such value in social discovery and sharing, not to mention place keeping in mobile. 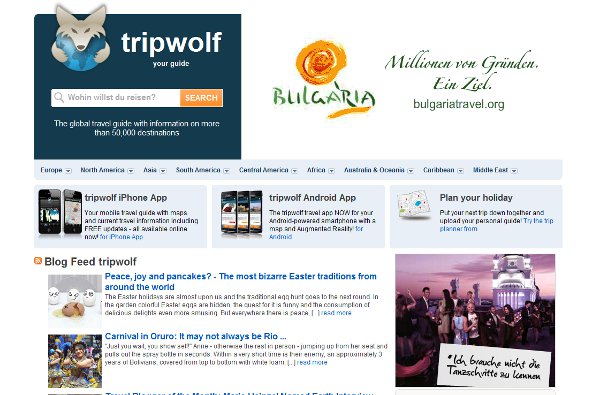 TripWolf, one of the deepest travel info sites ever launched.

Here is my analysis of this market in a nutshell. Searching Roomkey for a 3 star hotel is like searching the desert for fish. Expedia has every choice known to man – shopping there for the quiet librarian type, is madness. Stay.com allows people to build fantastic planning and sharing modules – but quick and easy are underdone. Global Hotel Exchange? This will be the quick, cheap, and easy for 3 star hotels, and a money saver for ultra luxury hoteliers (more on this next week) – Marriott and Choice, perhaps IHG, will view GHX as a redundant channel perhaps.

We can slice and dice theories all we want here in analysis land, but in the end consumers will decide exactly how successful all these entities are. This should go without saying. The other day though, more than one would be “expert” asserted the “veritable impossibility” of GHX succeeding, even without ever having seen it. They contend users will not pay $2.99 cents to book a hotel room for a week online, when users already pay Expedia and others (in essence) as much as 30% of the entire booking rate – does $2.99 compare to $299, more?

None of us can really predict with certainty what consumers will do. Roomkey may take off and become the Expedia Killer! What if this niche or that adopts GHX wholesale? Can Expedia create new revenue streams?

So, there’s reason to like so many travel helpers out there. Google Flight Search, Travelport, even the remotest localized OTA has its place in the sun. Well, maybe not for long for some, but you see my point I hope. Roomkey’s biggest mistake so far was not waiting to launch after some independent’s signed on. But then, Global Hotel Exchange was originally slated to kick of in January too (Sorry guys, it’s too apparent). Let me end up quoting from that HotelNewsNow article. Alissa Ponchione speaks of Roomkey’s John F. Davis: “Within the next 90 days, Davis hopes to get independent hotel groups on board.” What was wrong with 90 days before launch? 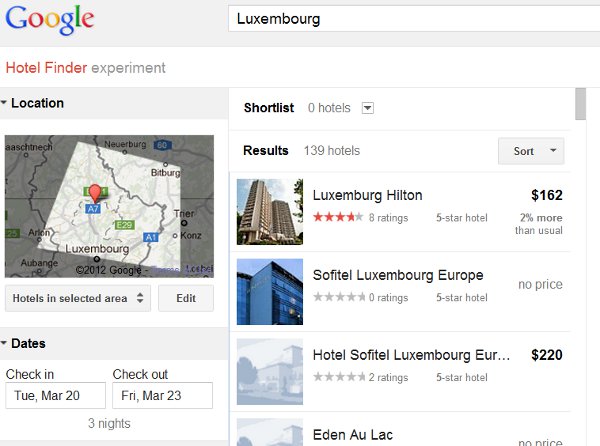 A last note on a breaking update: Hotel News Now found another of Roomkey’s strategies when they took screenshots of Davis’ user “exit strategy” – according to the report people aiming to book at hotels on Roomkey such as Holiday Inn, if they decided against, are met with a popup redirecting them to Roomkey. Sorry, but my tongue in cheek illness struck when I read this. Now I envision little digital Davis pirate ships scouring the Internet for users to press into service aboard SS Roomkey. LOL, this is getting interesting. With Davis casting this net astern of the big 6 hotels, Roomkey takes on our “escape hatch” persona, more and more.

Editor’s note: Pamil Visions, parent company of Argo Travel News, is the AOR for Magnuson Hotels and Global Hotel Exchange. The company also consults and provides content for several other online travel companies including Stay.com, mentioned in this post. The opinions of the editor and author of this post, are not necessarily those of any Pamil Visions company, or their clients.