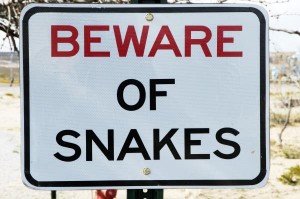 Villagers in Russia’s Far East have come up with a rather unusual way to mark the coming of the Year of the Snake, building an 8-foot tall, 400-kg cobra made entirely out of cow feces.

Yep, you heard that right. It’s a dung snake – but at least you won’t have to worry too much about the stench or anything like that, given that average temperatures in the village of Yolba at this time of year hover around the -40C mark.

RIANovosti reports that the snake – which is coiled around itself with its head upright and its tongue sticking out in a menacing ‘attack pose’ – was the creation of one Mikhail Bopposov, a local artist who said that he wanted to do something for the local kids. (View images of the snake HERE and HERE, via RIA Novosti)

“I made it so the kids could play around and have some fun,” he told RIA Novosti reporters. “This is not a sculpture, just a work of art I did.”

Bopposov added that his inspiration came from the up-and-coming Chinese New Year which starts on February 10. Apparently, it’s not the first time that he has ‘got his hands dirty’ either, having previously made a replica tank out of cow dung in 2008 after leaving the army, and a cow excrement serpent in 2011 to mark the Year of the Dragon.

Bopposov revealed that villagers in Yolba actually have something of an ice sculpting tradition, but he said that the medium becomes difficult to work with in such bitterly cold temperatures, prompting his decision to turn to cow crap instead.