Yesterday Russian Federation President Vladimir Putin  inspected preparations for the XXVII Summer World University Games to come to the Kazan in the Republic of Tatarstan. According to news from the president’s office, Kazan Arena and the Water Sports Palace there will soon become the latest focal points of a Russian surge to regain a sort of sports dominance. 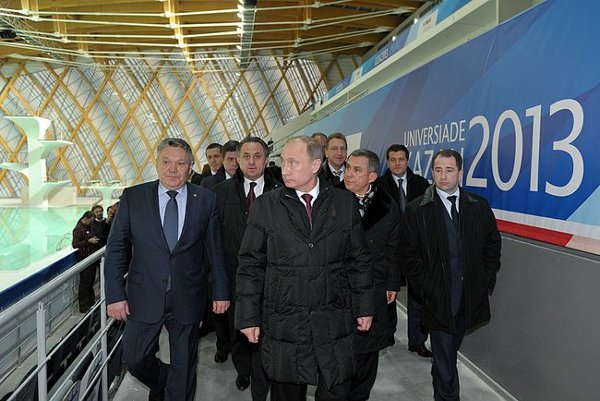 Visiting a number of venues for the upcoming University Games, FIFA World Cup, and conducing a meeting with the the Council for the Development of Physical Culture and Sport, Putin took time out of a busy schedule to inspect preparations there in this, yet another Russian sport tourism development. Most people are tuning in to the goings on at Sochi, on the Black Sea, in preparation for the 2014 Winter Olympics there, but few see the significant moves Putin’s administration is making elsewhere in Russia.

Coming this month, the Water Sports Palace there plays hows to its first test competitions. The venue is the home now of the 2015 International Diving Federation’s Grand Prix series.

The Water Sports Palace has three pools and will host its first test competitions in April. In May, it will be the venue for a competition in the International Diving Federation’s Grand Prix series.

Putin continues to be seen waving the Russian flag to the world of sport, but also spurring a somewhat massive economical strategy for boosting the economy there. A construction boom in Russia, when most other nations see retracting growth models, tells of a progress in Russia not seen in decades. From our own research for Sochi, it is clear the picture painted in the West of an archaic Russian system is simply not all that accurate. Sochi, for one, is a far more modern and dynamic place than the news portrays most days.

We’ll keep you updated on these sport tourism moves and more, but for now consider a new look at Russia. The video below speaks of the Russian construction boom we mentioned.