I meet him in an airy street one Saturday afternoon. Unthinkingly, that morning I decided to wear a bright yellow silk blouse. How could have I predicted that the person I was going to meet wouldn’t be able to appreciate the beauty of my complexion against the soft light oozed by the fabric. Valeriy, the person I’m meeting, is a colour-blind artist.

Having a natural gift at reading people, I can’t help but notice an expression of disbelief and panic, written on his face. 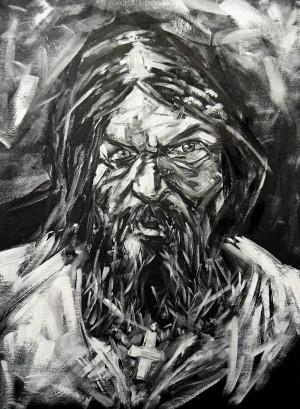 “How about some coffee?” I offer.

He stares at me unusually, as if I was a hallucination.

“Tea, perhaps?” he replies and gives himself a pause to travel back to his cozy world.

There is silence hanging over us as he looks at his cup. “It must have been hard for him to stay true to himself and withstand public opinion”, I explain his unwillingness to speak.

“All I want is freedom. That’s why I do it”, explains Valeriy when I ask him about his art.

“Freedom from the imposed rules of society?”

Suddenly his face disappears and magically there is a whole new person who appears to be sitting at the table right across from me.

“Don’t misunderstand” he says, “I had a wonderfully routine life, and was very well-off. I worked at a factory and there was stability”.

He immediately runs out of words and stares at me in that unique manner which is characteristic of him only. “Now that is all replaced with art”, he adds.

Over time art has become an alternative reality that he was willing to escape to, leaving behind all the worries of the material world which by common definition represent the only reality.

The talent that was long dormant inside him was reawakened on a New Years night in 1999, when his alcohol-induced misdemeanors took him to a hospital. He woke up to the famous speech of former Russian president Boris Yeltsin, stepping down and proposing Vladimir Putin to replace him. That was the turning point that separated the dark of his alcoholic past from the light of his sober future.

“I went in the street and observed street artists selling their artworks and the reckless rebellion in me decided to leave my old life behind and pursue a new path, that of an artist”.

He never studied, of course, he tells me when I inquire about any formal education. 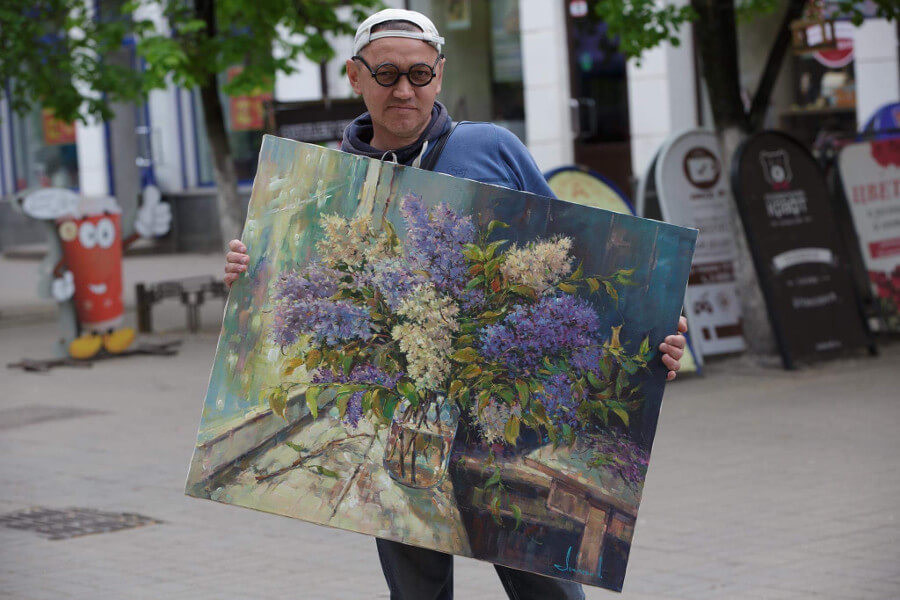 “I have always admired Anatoly Zverev”, he says, “but I think it’s fair to say that over the years I have developed my own technique. That of intuitive painting or painting the energy, as I call it. Take a pencil and a piece of paper. Good”, he nods approvingly. “Now look at me and try to depict my energy on paper. Without looking down at it”, he adds warmly. 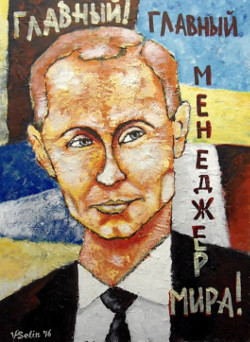 “I’m not really that much of an artist”, I repeat what I’ve been told countless times ever since my childhood.

“That’s because you never tried”, he reassures me.

Feeling like Antoine de Saint-Exupéry who was requested to draw a sheep by the Little Prince, whom he met amid a desert, I give it a try. I draw the heavy eyelids covering his widely spaced eyes and the dark circles framing them. That’s all I see and that’s all I’m interested in – his eyes. The darkness of his flesh and the brightness of his pupils. His eyes – the window to his soul.

“There, you see? You’ve got a real talent! You revealed my true character! That’s what I want to teach”, he explains to me.

He prefers to paint life, and from life. You cannot expect him to produce a photographic image of a person and when he does it on request, it’s almost always ‘dead’ by his own definition. He is remorselessly direct in exposing the true personality, doing the impossible by unveiling both beauty and ugliness all at the same time in one painting

I listen to him, fully absorbed.

“But what about colours? How do you see them correctly if you’re colour-blind?” I ask him.

“I read what’s written on the box. But, honestly, I feel the energy of a certain colour and that’s how I decide which one to apply. But if you ask me, there are only two colours in life and in people : black and white. Black represents the evil and white represents the good.”

Another piece by Valeriy Selin

He sold some of his best works recklessly, now regretting it and wishing he didn’t have to sell them in exchange for food.

“If I was completely free, I wouldn’t think twice and live as a hermit, purely for my art”, he says.

“What’s preventing you from doing that?”, I ask.

“I have a family and that means I’m responsible for them. The man always is”, he adds proudly and takes a phone call from his wife.

Three days later I sit at a café, pondering on his words. The sudden realisation dawns upon me: we do art to escape from the worldly darkness to reach an almost cosmic dimension and that is the closest we can ever come to the feeling of complete freedom.

It’s a Saturday night when we finish our teas and say goodbyes. After more than five hours he finally smiles at me, letting me smile back at him. He makes his way to a bus stop to get home and buy colours on his way, leaving me with an imaginary pencil in my hand, ready to create.

I’m grateful. His open face is a gift.