Meeting industry in Prague, which is an industry associated with organizing congresses, conferences, corporate meetings, and incentive events, generates in multiplication an annual income of between 170 and 200 million Euro to public budgets. According to the new KPMG study prepared for the Prague Convention Bureau, only 3,9% – between 6.5 and 7.5 million Euro of the sum – will return to Prague’s budget.

Based on KPMG’s analysis, the performance of Prague’s tourism business, of which a key part is the meeting industry, represented roughly 1.3 billion Euro in 2016, which is about one-third of the Czech Republic’s overall performance. At the same time, it is also 6 to 7% of the economic performance of the capital, which makes tourism one of the most important economic sectors in Prague. Meeting industry accounts for 1.1% of Prague’s GDP, solely to the tourism industry it is for 15%.

Unlike leisure tourism, the meeting industry is severalfold more profitable in terms of the amounts of money international congress participants spend. On average, a congress delegate coming from abroad spends 218 Euro, which is four to five times more than the expenses of a usual visitor. Total revenues from the meeting industry, including sales to the local participants, reach up to billion Euro in multiplication.

“The meeting industry, however, brings not just billions in public budgets, but it also creates specific jobs. In Prague, this means roughly 5,470 full-time jobs, which is 5.5% of the total employment in tourism in the metropolis,” says Ondřej Špaček, KPMG expert on tourism. Meeting industry in the Czech capital has also predispositions for further growth. According to data from the Czech Statistical Office, 2016 was a year when the highest number of events in the last 10 years took place in Prague 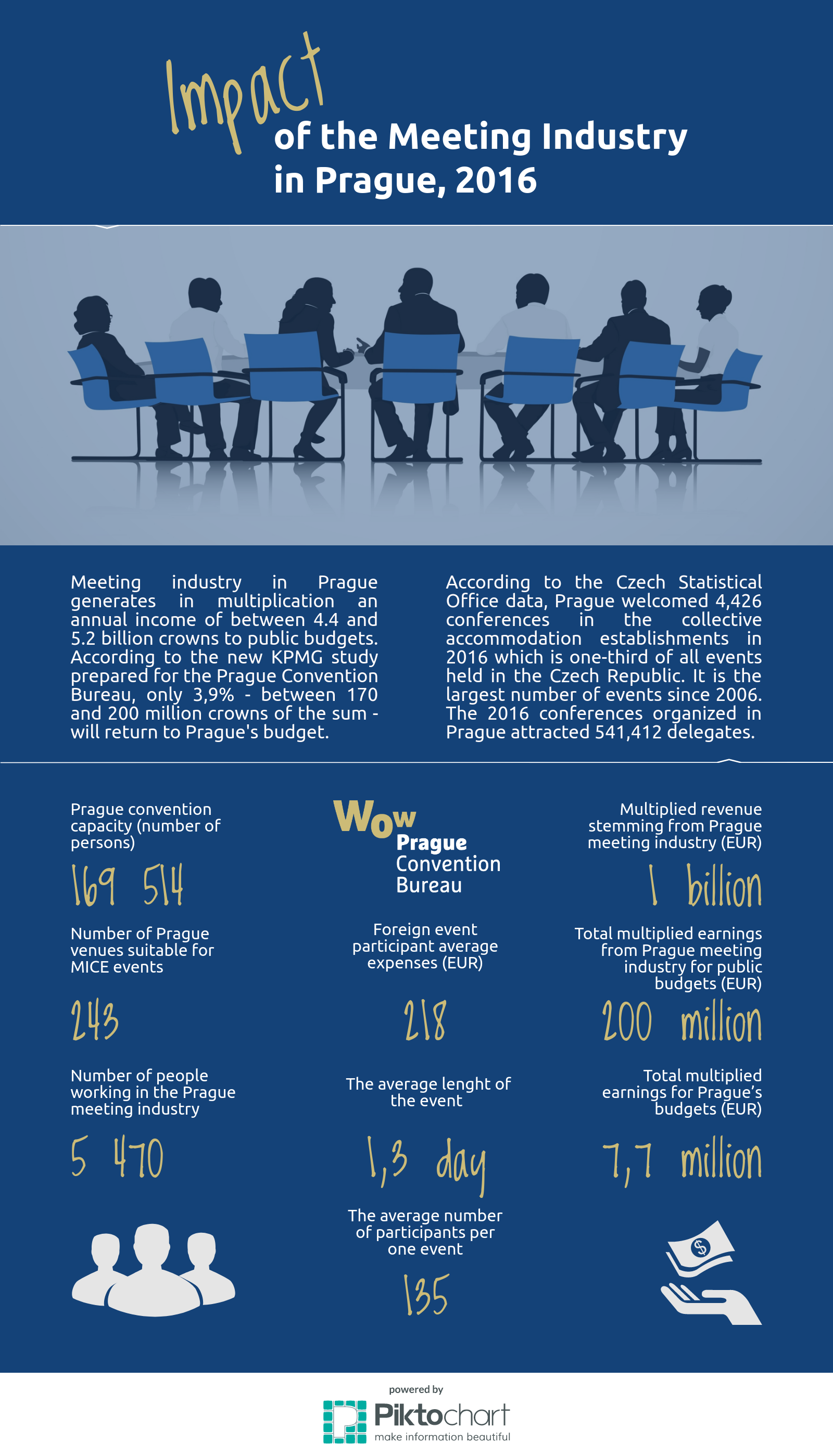 “Prague, definitely, has a lot to offer to the event organizers,” adds Roman Muška, Director of the Prague Convention Bureau, and he continues, “in addition to the rich history, there is, above all, easy access to the city, and the city ‘s capacities. You can fly to Prague directly from 162 international destinations, and stay at one of the 795 hotels offering nearly 92,000 beds. According to the 2012 area, comprehensive statistical census of the meetings and incentive tourism executed by the Ministry of Regional Development and Tourism, the Czech Republic offers 243 conference facilities with a total capacity of over 169,000 persons.”

The popularity of Prague is also confirmed by statistics of the International Congress Association ICCA. In the popularity ranking of the world congress destinations, annually published by the association, the Czech capital has long been maintaining its position around the 10th place. According to the Prague Convention Bureau statistics, most delegates arrive in Prague from Great Britain, Germany, and the United States. The most discussed topics are pharmacy and healthcare, industry and, last but not least, IT and telecommunications.

Prague Convention Bureau (PCB) is a non-profit organization established in 2008. The company acts as an official representative of the Prague congress tourism and promotes the city as one of the European leading congress destinations. Together with Czech tourism bodies, partners and members the PCB offers effective assistance in organizing conferences, meetings, seminars, exhibitions and incentive events in Prague.