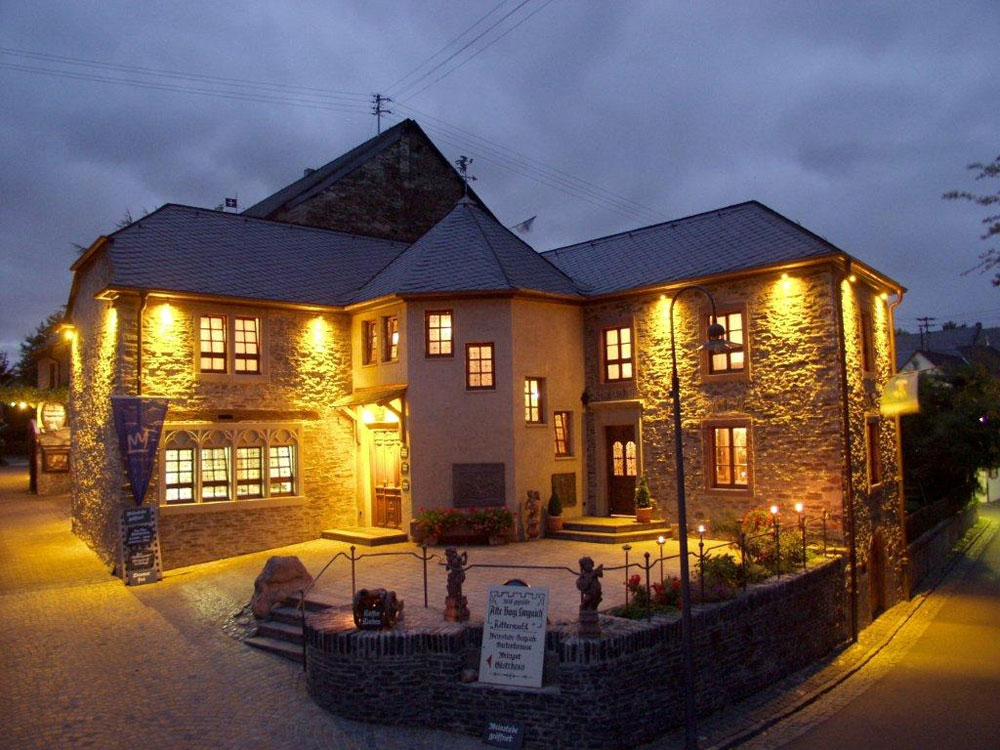 How would you like to dine among knights and troubadours, fair maidens and squires? For those of you who travel to the charming Mosel Valley, the German equivalent to Napa Valley, but without the Tuscan flair, Longuich is a destination as appealing as any. But what Longuich has, that other cobbled towns and villages of the Valley don’t, is a true knight’s castle turned hotel and restaurant.

The building is no longer as tall and imposing as it once stood. Its gracious tower, upper floors and fortifications are gone. Yet, as you approach the entrance, you can still feel the presence of the knights who once roamed these lands. 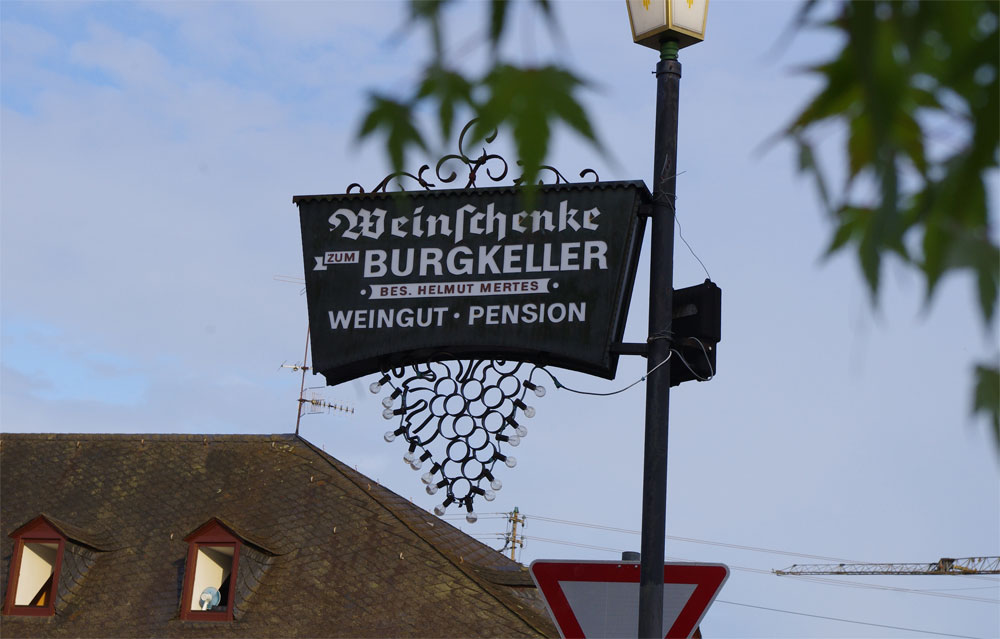 What you see is the legacy of Gerhard Plate, the knight who built upon an already existing structure, first mentioned in 1360, but later dilapidated, and created a Gothic marvel of sorts. When he finished it, in 1496, there was no other castle like it in Longuich. Even in its present form, the building is unique, awe-inspiring, and magnificent, considering its location among contemporary German houses, all so simple, vernacular edifices.

Like any other burg, Gerhard Plate’s has a history of disputes among knights, division, transfer of ownership and so on. For a brief period, the castle was even owned by the Abbey of St. Maximin in Trier, but with the secularization of 1802, the Roman Catholic Church lost its constitutional role in Germany, and many of its buildings were repossessed. These events bring us closer to the birth of the hotel, but it would take till 1976 for things to take shape. 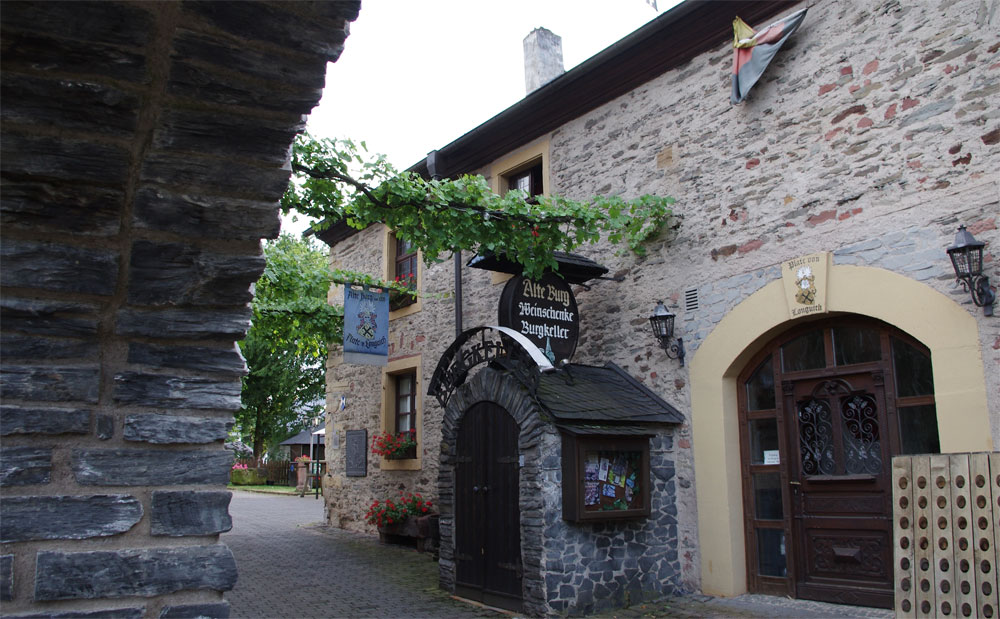 The Mertes family, who currently owns the castle and several other buildings around, bought the burg in 1812. For six generations today, they dedicated their lives to preserving its legacy, and promoting its history and past traditions. No other Mertes before was as committed and successful as Franz-Josef, who envisioned a series of thematic dinners that attract large groups of people every Friday in the historic Rittersaal (Knight’s Hall) for a genuine Knight’s Feast, among maidens, troubadours, and squires.

After you are welcomed with a cup of honey wine, you get to enjoy a menu fit for a knight, featuring traditional mouthwatering specialties: rye bread from the stone oven with butter and fine herbs; beef soup with lovage and root vegetables from the castle’s own garden; smoked brook trout; spit roasted piglet served with bacon potatoes and pickles; oven fresh apple pie; and fine local cheeses. And of course, this stellar menu would be nothing without the wines… 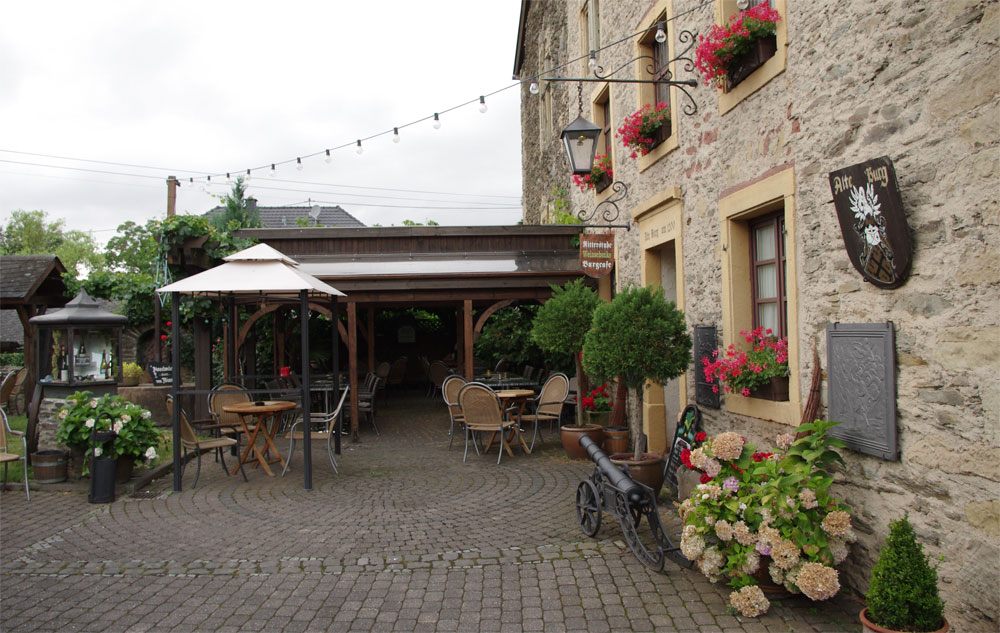 If history has its magic appeal, Alte Burg Longuich is also known for its cellars, and for award winning wines, like its 2009er Rivaner – Lieblich, winner of a silver Kammermünze (a national award for wines and sparkling wines); dry Riesling Kabinett, 2008, as well awarded a silver Kammermünze just like its superb Riesling Auslese, 1999. Even the open wines served by the glass are award winners, and among the most appreciated in Rheinland-Pfalz.

The grapes are grown locally, on the beautiful hills and slopes of the Mosel Valley. Walking in the vineyards is a favorite pastime for locals and tourists alike: the views are breathtaking, yet serene. Outside the green vineyards and orchards of apple trees, there’s more to explore.

In the Footsteps of the Romans 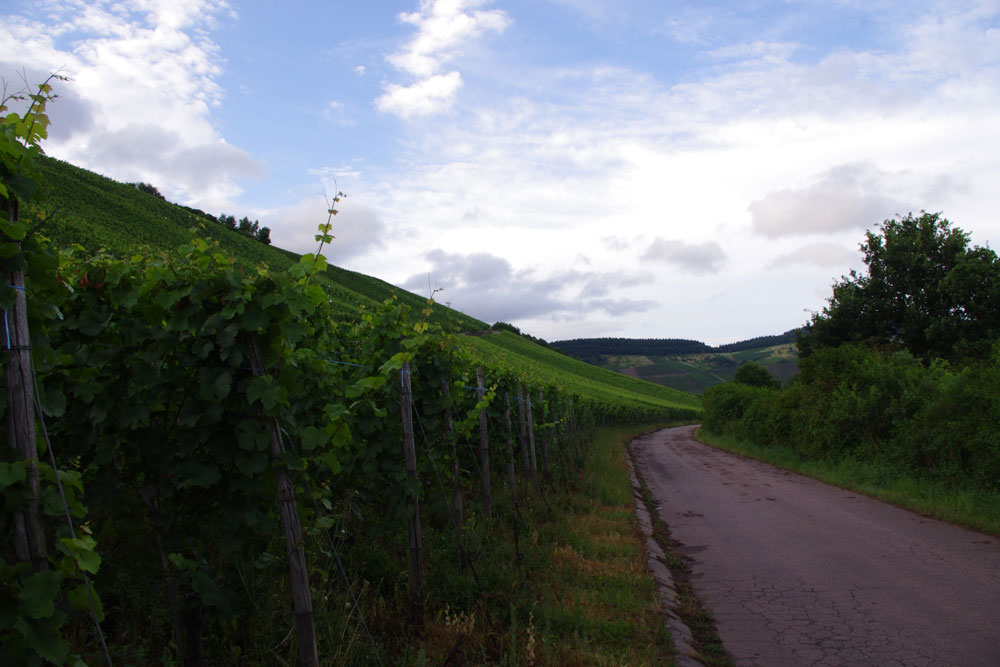 Longuich’s pride, the Roman Villa Urbana, dating from the late second century, is included in all tourist guides of the area, and it is not the only attraction in town. There are several winegrowers’ homes to explore, medieval homes, and traditional farms. From the Alte Burg, which is located less than 100 meters from the bike path, travelers begin exploring the Mosel Valley, and discover other nearby treasures.

The oldest wine village of Germany, Neumagen-Dhron, is less than 25 km away. Perhaps the most interesting attractions here is Stella Noviomagi, the “wine vessel” a replica of a Roman wine ship that cruises the Mosel, offering fine Roman cuisine, and wine tasting events.

And then, there’s Treves, the oldest German town, a short 15 km away from Longuich, featuring no less than 8 UNESCO World Heritage sites. The Roman structures you can visit here include the famous Porta Nigra; the imposing Cathedral, which hides the seamless robe of Christ in its altars; Aula Palatina, the Basilica of Constantine, the first Roman emperor to be converted to Christianity; the Roman Amphitheater; the Imperial Baths; and the Roman Bridge; to name a few.

A week or so in this region is therapy for the soul. The locals are friendly, welcoming people, pretty much everywhere you go, and even more so at Alte Burg Longuich, where Elfie, the hostess, welcomed us with a cheerful smile, despite the cloudy weather. 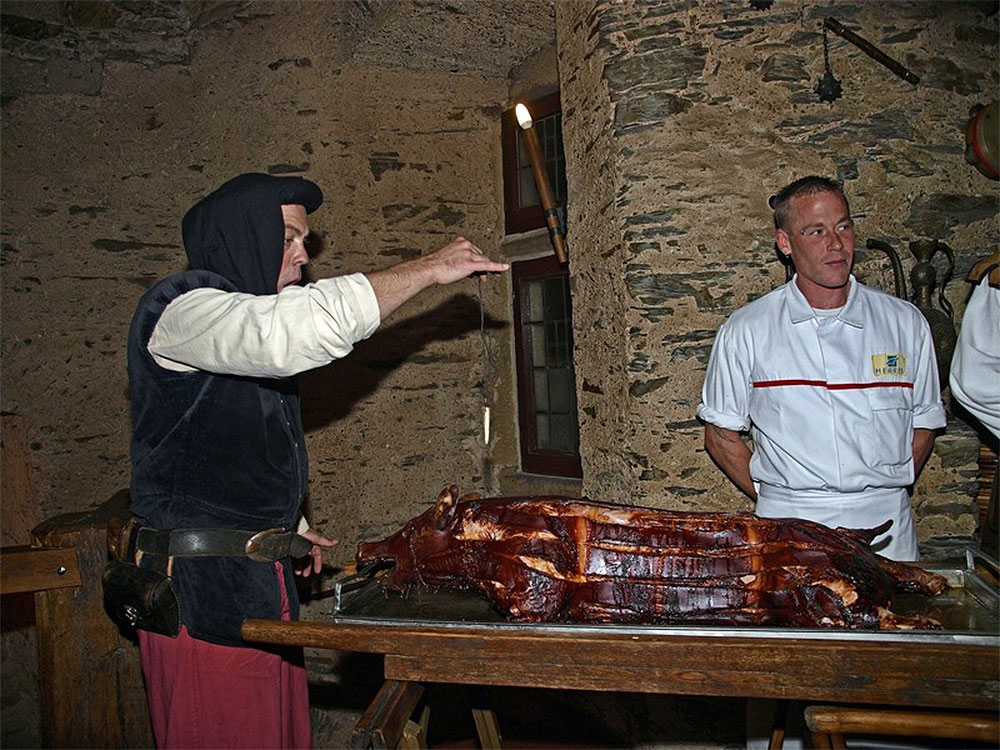 This is a place where hospitality is more than industry slang: it’s an experience, no matter how short your stay. For those who want to spend the night at the castle, rooms are priced from as low as 30 €. The restaurant gourmet menu is affordable too, compared to other venues in the area, which offer lower quality food at pretty much the same prices. But if you are not hungry, do what we did last week: stop for a glass of wine. It will convert you.

Tourism Profits and Surfing the Humongous COVID Second Wave
TUI and Others Seem Determined to Cram Tourists Down the Throats of Greeks
The Greece Tourism Crisis: First Good, Then Bad, Now Worse
Now You Can Listen to the Oldest Song in the World [Video]
Previous: Priceline & Expedia: Fearing Airbnb Like the Klingons
Next: Paris: Hotel Félicien Boasts Interiors by Fashion Designer Olivier Lapidus

Greece’s accommodation and food services sectors took a huge hit in July, as the effects of the pandemic begin to set in.

After ripping its way across the Ionian islands and the Greece mainlain, cyclone Ianos slashed across Crete island last night.