A story on Skift this morning bears the headline; “Airbnb’s Growth Doesn’t Scare Priceline at All”. A big picture of William Shatner set to duke it out is as funny, given Priceline should be scared, that is. If only Priceline’s Star Fleet had integrated Airbnb! 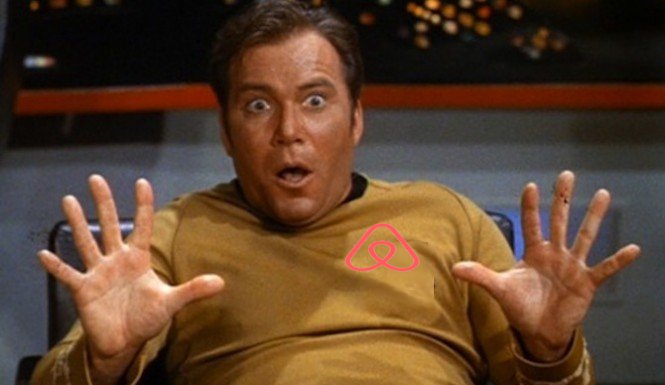 William Shatner is a favored actor for me, and for a couple hundred million other people too. The Priceline spokesperson (some people think owner) is iconic, but as star-ship Enterprise navigator Mr. Sulu (George Takei) contends, Shatner is a bit narcissistic too. It’s fair to say Priceline and Shatner are full of themselves, over-confidence oozing from every stock ticker orifice. As for Shatner or Priceline being fraidey cats, the ultra rich do get possessed with themselves, and Expedia fits into the type too. 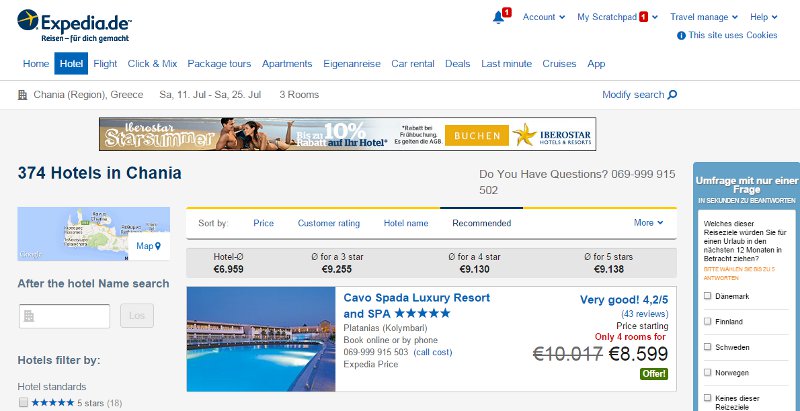 The Skift article is a good example of how controlling interests in business can drum up a survey and some media when they need it most. Borrowing from the article quotes on a Morningstar report by analyst Dan Wasiolek:

“…the competitive threat from Airbnb is “manageable for both Expedia and Priceline.”

According to this report Airbnb is only estimated to negatively impact either Priceline’s or Expedia’s booking growth by around 1 percentage point by 2019. But as is always the case, the ways in which bean counters slice and dice the numbers is often a misleading reality. While growth as a constant for all these players makes sense, the physics of all markets absolutely refute what the Skift piece reflects. Yes, there is room in the OTA space for three or more players. However, Airbnb on a fast uptake ramp HAS to cost both Expedia and Priceline, it’s irrefutable opportunity cost you see? Try and imagine an alternative universe as in some of Shatner’s movie plots, say for instance a reality where mega fat cat Priceline had bought out Airbnb from the get go! 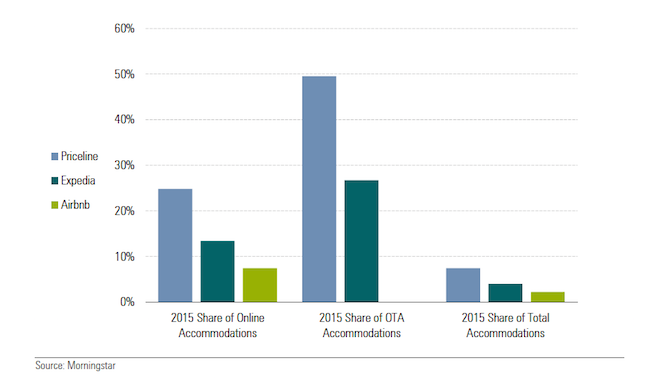 Now the graph above from Morningstar depicts black hole of lost opportunity and growth for either of the aforementioned OTA giants. The Skift article suggests the above sales numbers reflect Airbnb gobbling up the “cheapo” room segment. So does this mean Expedia will soon refuse to sell you a cheap room? Come on, let’s identify some PR and marketing hype and manipulation here.

To sum up here, let me just get real with our readership. The real world where travelers and accommodations meet reveal little evidence a hotel accommodation can come close to what Airbnb has to offer. If my friend Brian Solis get’s the $big $bucks to speak to an audience about the future of business, and how the guest experience is all that matters for new age marketing, entities like Airbnb will one day overtake traditional OTAs for the sake of something I’d call “pre-experience marketing” – for lack of a better example, let me share an Airbnb experience of my own, and not a $60 a night one. 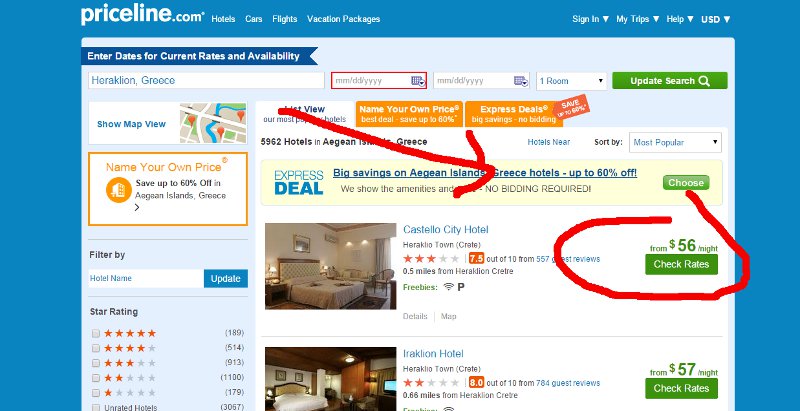 If Priceline is not worried, how come their landing page shoves cheap hotels down my throat? Then there’s the Web 1.0 interface too… or am I wrong?

We met (our team) some of our best friends on Crete a year ago, through Airbnb, ironically. Searching for a hotel or villa accommodation for the off-season, Airbnb provided us with a lot more than a cookie cutter, bargain hotel stay.  Searching the maps and recommendations on Crete, we actually came to know several property owners. Dionysis and Georgia Karalaki (where we eventually stayed) owned several stone villas outside Chania. VanGos Tsourlakis (see if you’d rather stay here), an architect with a wonderful luxury villa outside Rethymno, he’s a man so hospitable and kind as to be honored by Airbnb at a San Francisco gale last year too.

Here’s to VanGos Tsourlakis, Superhost & winner of ‘Most Unique’ Listing. Can we now come live with you? #AirbnbOpen

You can read the various stories of these folks and Crete via my enthusiastic recollections (Google Phil Butler and Crete), but the point is, no hotel on Earth will provide such experiences before, during or after a stay. At least to unless you pay for the experiences. Expedia and Priceline supply lists basically, not direct connects to owners and managers, and so on. To even suggest this kind of lower marketing funnel value cannot hurt big OTA business is ludicrous. Airbnb could snatch the rug out from under both Priceline and Expedia. Google did it to Yahoo!, Apple did it to Microsoft, and Kodak did it to themselves. So let’s be real, Airbnb is offering what OTAs have failed to so far.

Finally, speaking of in depth reports, this one by Piper Jaffray (PDF) is extensive. In it, Airbnb is featured prominently for aspects like “enabling”, the so-called “shared economy”, double sided reviews, and so on. However in depth the report may be though, several aspects of it are flawed. Most notably, comparing a rental home price to a hotel room or suite price is an “apples to oranges” proposition in the first place. Let me illustrate one reason why this is so. 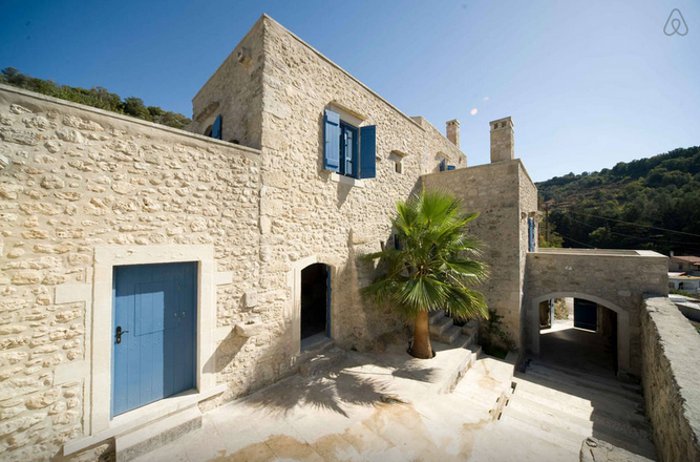 VanGos’ stone villa on Crete versus the cool temper of a hotel lobby?

Let’s take VanGos’s stone villa in the countryside in the central highlands of Crete. The cost to let this architectural masterpiece up the stone stairs from the best food in Crete is €160 per night. This is far above the $60 price point the Morningstar report states, but this is misleading too. The point is, VanGos’ villa offers value no hotel I ever heard of can. On top of this, we are misled by the Skift report because home or villa rentals are more akin to vacation rentals of old. In the Grotto Homes case, the villa in Goules on Crete sleeps 9 guests in three luxurious bedrooms with 7 beds. Let’s be fair and divide the cost by three. That’s about €53 euro per might to enjoy your own private pool, and indoor grotto pool too, and the magnificent hospitality of quintessential Cretan filoxenia (look this up). By the way, the three rooms at the Cava Spada listing via Expedia at top compared to Grotto Homes’ offer is a “no contest”. The resort hotel costs 4 times as much for a two week vacation.

An equivalent experience at the finest hotel on Crete (I am friends with the owner) will cost you about two and a half times this much, but there is no pool. So Priceline and Expedia being unafraid? Well, Bill Shatner is probably not afraid at all, his billions are no longer tied inextricably to Priceline. As for the OTAs, they’re leaning on some media coverage until a strategy can be leveraged, unless I miss my guess.

I think I made my point, let’s hear your view.

Freshwater “Miracles” of Crete Island
Crete is Becoming a Top Winter Refuge and Remote Working Destination
Can Airbnb Continue to Expand as Before?
The Keftiu: Were They Absorbed and Erased from History?
Previous: Hoteliers: SnapShot Travel to Build the First Analytics Platform for Hotels of Any Size
Next: German Hospitality: Alte Burg Longuich