Procession featuring relics of St. Blasius on the main streets of Dubrovnik. Photography, courtesy Croatia on Facebook.. Saint Blaise (Croatian: Sveti Vlaho or Sveti Blaž) is the patron saint of the city of Dubrovnik and formerly the protector of the independent Republic of Ragusa.

February in Dubrovnik is a special month. It begins with the Feast of St. Blasius, a tradition with roots in 972, when St. Blasius (Croatian: Sveti Vlaho or Sveti Blaž) appeared in front of Stojko, a canon of St. Stephen’s Cathedral, to warn of an impending attack on Dubrovnik by the Venetians. The saint’s effigy, as an old man with a long beard and a bishop’s mitre and staff, remained on Dubrovnik’s state seal and coinage until the Napoleonic era. Today, St. Blasius also adorns the flag of the Republic and all official seals and coins minted in Dubrovnik.

The Feast of St. Blasius goes one from February 2nd to February 7th, yet the most spectacular celebration can be seen today, February 3rd, when relics of the saint – his head, a bit of bone from his throat, his right hand and his left – are paraded in reliquaries. 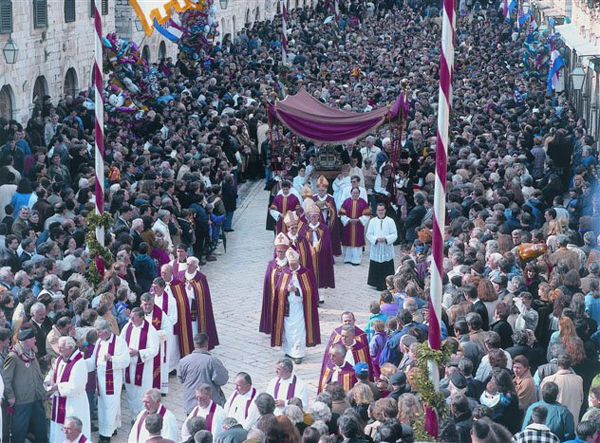 It’s an impressive procession, with thousands of attendees. The festivities begun yesterday, February 2nd, with the Virgin Mary Candlemas, when white doves were released in front of the Church of St Blasius, Dubrovnik’s most beloved church, and the saint’s flag was raised on Orlando’s column.

This year is the 1,039th Feast of St. Blaise in Croatia, and aside religious ceremonies, numerous other cultural, entertainment, musical and sporting events are held through the week. For tourists, this is a great opportunity to see many participants in traditional folk costumes, and understand a great deal about the city’s heart and spirit.