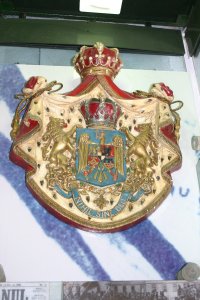 Halloween is just around the corner, and because this is not a holiday limited by geographic location, feel free to look for interesting spooky places to visit all over the world.  There are many fairs and events celebrating Halloween, but there are also places with an impressive historical significance that deserve to be visited. The WWI Mausoleum at Valea Mare, Pravat, Arges county in Romania is one of them.

This World War I mausoleum known as the “Mausoleum from Mateias” was built between 1928 and 1935 by De Nicolo, on  a design by the Romanian architect Dumitru Ionescu Berechet. The monument commemorates the fierce battles fought in the Campulung area during the autumn of 1916.

I visited the mausoleum a few years ago on a day-trip planned by my husband. I told him in advance I wanted to see a place I didn’t visit before, and, on a Saturday morning, he asked me to wake up early, then he drove me to a mysterious destination. As we approached the end of the trip, I realized where he was taking me, because this was a monument we passed by on a number of times, always in a hurry, going from one place to another.

The mausoleum stands proud at the top a hill, near the road that crosses from Muntenia to Transylvania – the old commercial route known as the Rucar-Bran pass. The nearby trees hide the monument from sight if you are trying to admire it from the road. Nevertheless, the locals like to say that it looks like a closed fist, with a finger pointing straight up, aiming to make people remember those times and the heroes who died in the war.

The monument consists of the crypt and an attached tower. The walls are inscribed with the names of the many soldiers fallen on duty on this battlefield. A niche houses a crystal casket where the remains of several of these heroes are carefully stacked, and watched by a couple of candles. A “lighthouse” is housed by the tower, but it cannot be visited.

The access to the entire complex is a mere 3 lei (about US$1) per visitor, without any supplementary photo or filming fees. You have to climb some stairs to enter the mausoleum, and the first thing you’ll see is a museum which hosts documents of the time, printed or handwritten; uniforms; hand weapons and large projectiles; maps of the front; excerpts from publications of the time; and so on. You might be impressed by a portrait of Ecaterina Teodoroiu, a brave young girl and Romanian hero who fought and died in the first line, a really impressive and unusual thing those days for a woman.

Between the museum level and the original complex, there is the promenade terrace and the bas-relief with the following text: “For the honor of the homeland and of the flag, for uniting Romania, we have defended the holy land of our country with manhood and faith in victory, to the ultimate sacrifice, thus leaving you, generations to come, a free and independent nation!”, while to the right it bears the text “We reverently bow before the supreme sacrifice of the brave heroes of our nation, brave and worthy defendants of our national entity, and on the call of our country we will do the same sacrifice to maintain the independence and sovereignty of Romania!”

This is a well preserved mausoleum, a place where history has power, a place that is overwhelming if we think about the heroes who are mentioned there, and about the battles, the sacrifice of our predecessors so that Romania would be independent and would have its current borders.