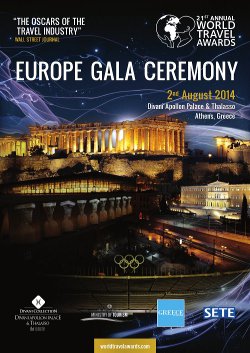 One of the most prestigious travel accolades out there, the World Travel Awards are known as the “Oscars of Travel” by industry executives worldwide. Among this year’s winners, the host hotel Divani Apollon Palace, and Europcar, took home honors along with dozens of other excellent players in the tourism game. World Travel Awards President Graham Cooke has this to say about this year’s Europe gala:

“It was a fantastic night for our winners, congratulations to them all. This is our first visit to Greece and Divani Apollon Palace & Thalasso have done a wonderful job in hosting our Europe Gala Ceremony; they should be tremendously proud of their achievements. Europe is presently in the middle of a fast paced recovery after a couple of tough years, and the brands that have taken our awards tonight are at the forefront of this. Our voters have recognised these are the key industry players who will be leading the pack over the coming years. This is a springboard to their continued success.”

For the complete list of winners readers should visit this link.