This weeks resort spotlight shines on Westin’s Astir Palace in Athens. Sitting in the middle of 75 acres of lush gardens along a private peninsula, this resort offers endless vacationing possibilities for the Greece traveler. But the average traveler doing their discovery, just may not give this stunning resort a chance. Here’s the pro’s and con’s of this Athens hideaway. 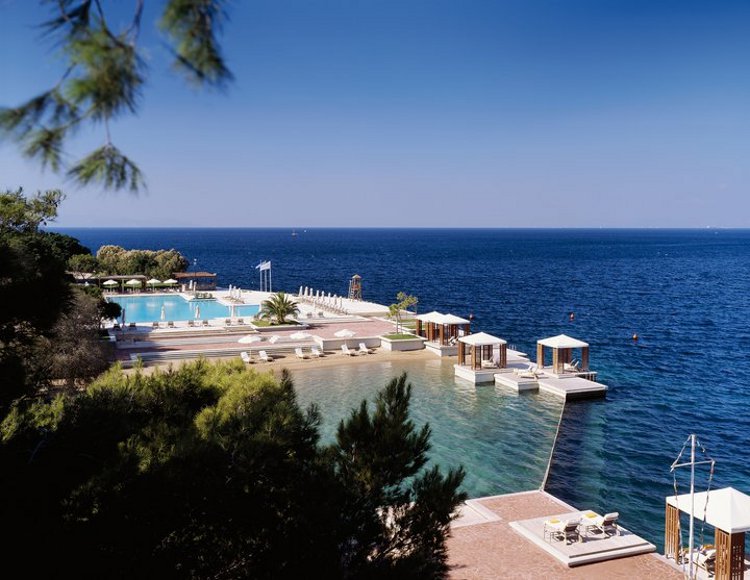 Situated in a uniquely private location along the so-called Athenian Riviera, the Astir Palace is a seaside paradise outside the madness that is Athens, and set within an excursion paradise. A half hour drive from the museums and ancient artifacts of Greece’s capital, this place echoes of serine seclusion, archaeological sightseeing wonders, and seriously fun shopping and seafaring activities.

In this part of the greater Athens area, visitors can enjoy a region of Greece not so overrun by the madding crowd. Some of the attractions nearby to Astir Palace include; the marvelous Vouliagmeni Lake, the Museum of Cycladic Art, the nearby the ruins of the Temple of Apollo Zoster in Vouliagmeni, the endless beaches along the peninsula, and the Acropolis  is only about 15 miles away. As for the resort itself, there’s a world of luxurious wonders within, as well.

Screenshot of the resort landing page – a resort unwilling to engage with stunning web design, is not one that impresses me.

If we move past a less than stunning web design, the dining possibilities at Westin’s resort, remember we did say “endless” possibilities. There’s the Galazia Hytra Restaurant’s all-star Chefs: Nikos Karathanos, Chrysanthos Karamolegos and Dimitris Dimitriadis conjure up Greek cuisines like at no other eatery in the area. But if their culinary does not totally satisfy, then Kymata Restaurantoffers a stylish American buffet to take some travelers home there. For a taste of authentic Japanese, there’s Matsuhisa Athens and chef Nobu Matsuhisa. Plus there’s at least 6 other specialty restaurants on the property, to say nothing of the bars and lounges.

The most notable of the latter category, the Blue Pool Bar looks out over the sea and a stunning Olympic size pool. 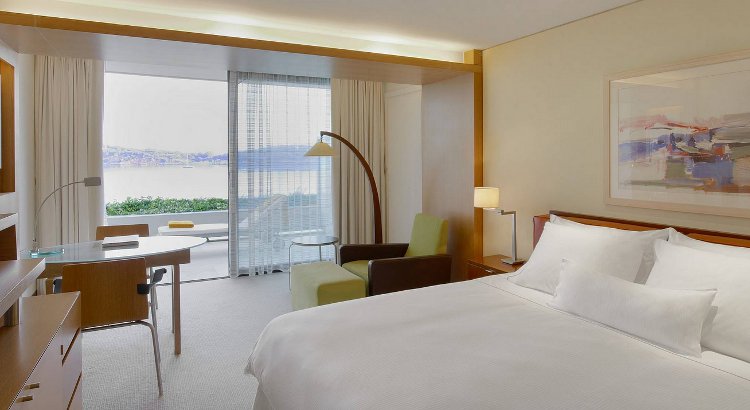 Accomodations wise, the resort offers a full range of rooms from standard doubles to the most chic and luxurious suites. At the median, Grand Deluxe Sea-View rooms (as above) reveal magnificent vistas of the Saronic Gulf from private balconies. The elegant and contemporary comfortable of these stays are symbolic of all the rooms at Astir Palace

Other hotel/resort features include; world-class shopping moments away, the WestinWORKOUT® Fitness Studio, the Sports Center, the Westin® Kids Club, Astir Ski Club, and the Spa At The Arion Resort & Spa, just to name a few.

Argo Travel Takeaway (un-visited): Most guests of the resort rate it pretty high on TripAdvisor. Without having stayed here, like any web researcher, I can only go on what others have said, the presentation of the resort online, and on prior knowledge of the area. Certainly the peninsula makes for a great big plus, but the room rates seem a bit high to me. For an instance, you can have a suite at the highest TA rated hotel in the area, Amarilia Hotel, for less than the sea view room shown above. But then that hotel gets low marks for Web marketing. Their site is awful.

Mandarin Oriental To Manage New Hotel in Greece
InterContinental Resort Crete to Open in 2023
A Look At the Sheraton Rhodes Resort: Through a Thousand Eyes
Greece’s Hoteliers Say Tourism Numbers May Reach Half of 2019 Levels
Previous: 5 Perfect Anniversary Destinations for Fall
Next: Balkans Roaming Rates to Be Scrapped