TravAddict: Credibility Gone Down The Toilet 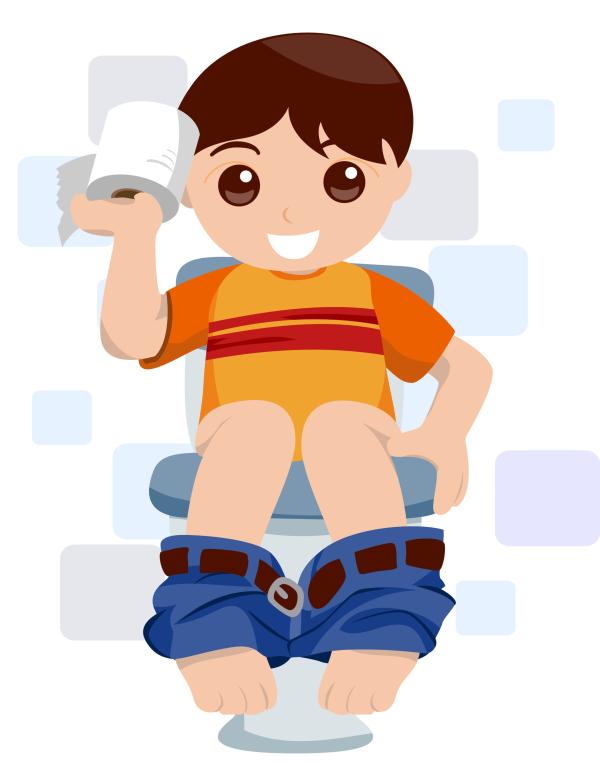 Adventure holiday specialists TravAddict.com has just rolled out a number of new ‘improvements’ to its website, including updates to its search engine and various other new ‘features’.

TravAddict says that its goal is to “enhance a user-friendly tour search engine which is easy to navigate and provides quality information to visitors.”

On the face of it, the improvements look good – the search engine (the site’s major function) has been given a long-overdue facelift, with the addition of glossy new images and better descriptions.

But where TravAddict have completely screwed up is with their new feature that allows users to vote on user reviews. The thinking behind this ‘great idea’ is that it will allow users to quickly locate the ‘most helpful’ reviews. Sadly, there’s one critical flaw in the idea that causes TravAddict to lose all of its credibility.

The voting has to be the stupidest, most open-to-abuse system I have ever encountered on a website – quite simply, it’s so stupid that whoever came up with deserves nothing less than the sack for their utter stupidity.

Anyone can vote, as many times as they like, again and again and again… And when I say anyone, I do mean anyone. For some reason, TravAddict deems that registering with the site first in order to be able to vote isn’t really necessary – after all, it’s quite unlikely that tour companies and agents, being the honest, upstanding businesses that they all are, would want to somehow manipulate the results now, would they?

We only have to look at the example of TripAdvisor to see just how honest the travel industry is when it comes to the cut-throat world of online reviews and sabotaging of reputations.

To illustrate, I performed a small experiment using G Adventures as my guinea pig (Sorry G Adventures, you might be great for all I know, but you certainly don’t look like it on TravAddict).

Here’s a screenshot of the most ‘useful’ review of G Adventure’s tours when I first logged in: 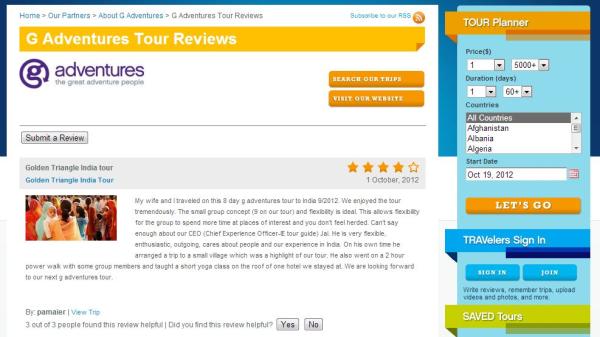 As you can see, 3 out of 3 users found pamaier’s review of their Golden Triangle India tour to be the most useful. pamaier’s review is pretty generous, giving away four out of five stars, and highlighting the friendliness of the tour guide in particular. All in all, it makes G Adventures look pretty good at first glance…

Now here’s a screenshot of MG’s review of a G Adventure tour in Peru which he claims he had to cancel due to the company overbooking his hotel – one out of five stars, no votes, sitting right at the bottom. 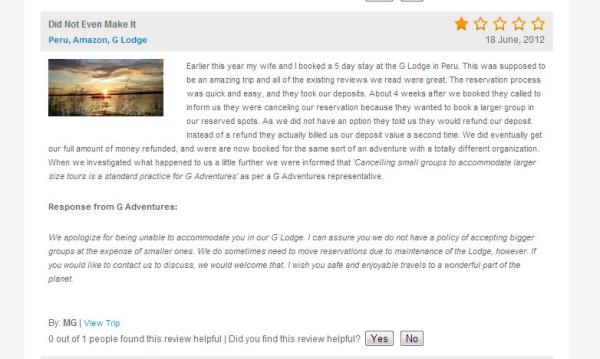 Five clicks later, here’s a screenshot of the same tour, sitting pretty at the top of the pile with five votes citing its usefulness. In second place, if you care to look, you’ll see a second one-star rated review which was voted up by yours truly, pushing pamaier’s review into a distant third place. 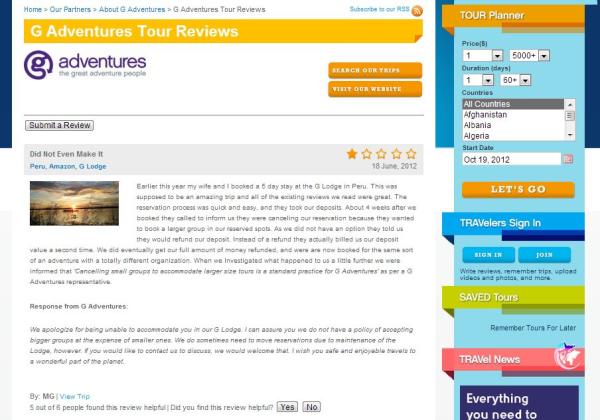 TravAddict has just made its whole review system – for whatever it was worth previously – totally worthless now. Reviews are only useful if they are credible – something that TravAddict obviously fails to recognize, otherwise, why would it flush the credibility down the toilet?

And if a site such as TravAddict can’t even recognize what is and isn’t useful for its users, freely allowing such abuse to take place as it does, what does that say about the quality of the rest of its website?

I for one, will be very wary of any so-called ‘recommendations’ I find on this site in future…

Lend Me Your iPhone to Test the “Backdrop App” Game Changer
Game-changing AI-powered Travel Innovations
VR Travel Experiences that Shape the Future
A Grain of Salt and H2O Hospitality Gets You 2.5 Star Bliss
Previous: Business Travel Costs Rise, Driven By BRIC Nations
Next: A Slovenian Winter Is Coming