Exploring Argyroupoli: The Valley of the Fairies

In the Valley of the Fairies near Argyroupoli

In the Valley of the Fairies near Argyroupoli

The story you are about to read may challenge what you believe a bit. But I am sure it will also speak to something in you. For this discovery of mine at Argyroupoli on Crete I owe my wife Mihaela and our friend Rebecca Skevaki, who’s the founder of Crete Urban Adventures, a big thanks. And to them I say, now you know why I was acting a bit funny during our exploration of ancient Lappa. Here’s the story of the Valley of the Fairies beneath the village of Argyroupoli (ancient Lappa).

There is a kind of flame in Crete – let us call it “soul” – something more powerful than either life or death. There is pride, obstinacy, valor, and together with these something else inexpressible and imponderable, something which makes you rejoice that you are human being, and at the same time tremble. ― Nikos Kazantzakis

By way of a brief description of Argiroupoli, the ancient village sits atop a verdant, fertile area, where two large streams converge to form a real paradise on Earth. But ancient Lappa (Argyroupoli today) was not always a tiny speck on the outskirts of touristic Rethymno town. In antiquity, Lappa had dominion over modern Rethymnon, Apokoronas, Agios Vassilios and Sfakia, as well as the two Lappa ports of Idramia (current Dramia) to the north and Finikas (near Loutro Sfakion) on the Libyan Sea.  Throughout antiquity, Lappa was alternately controlled by the ancient Greeks, the Romans, the Saracens, the Venetians, the  Byzantine Empire, and the Ottoman Turks. It is fair to say that Lappa has seen all that Mediterranean history has offered and that the souls all of our ancestors probably roamed the land at one time or another. This brings me to the point of this story. 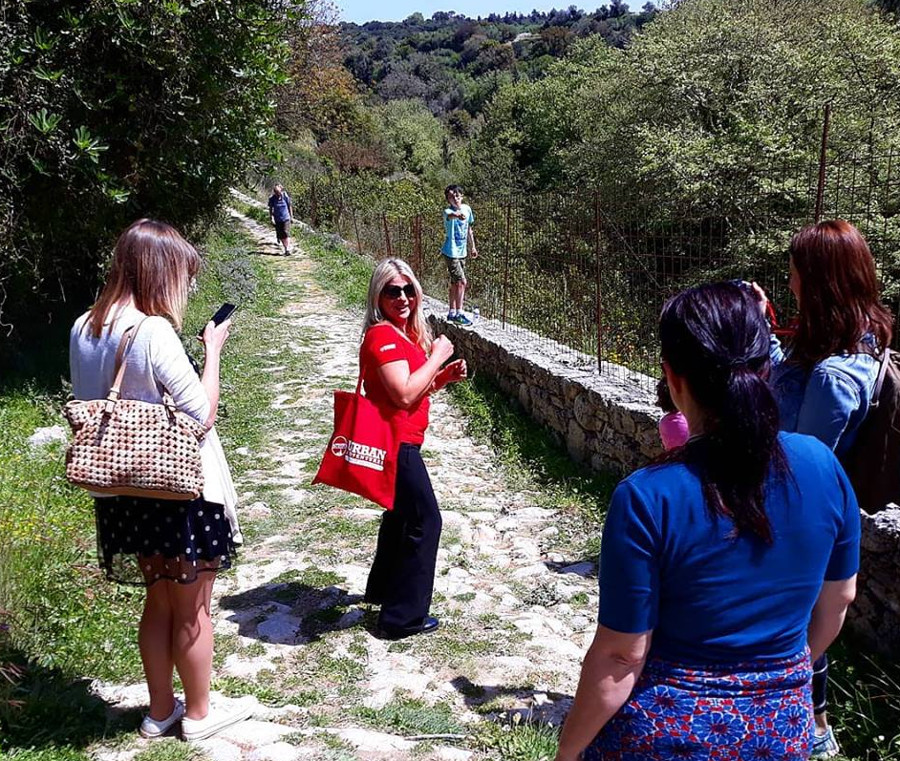 One never knows what to expect when being led to new places. This is especially true when a place has so much breadth and depth of culture, history, tradition, geography, and legend to explore. So when we dismounted our cars to follow Rebecca down the old Roman road toward the church dedicated to the Pente Parthenes (Five Saint Virgins), hearing her quip about heading to the “place of the ferries,” it elevated my ethereal warning buzzer. Following her down the road toward the green valley below, we came upon an eons-old stone paved road wound beneath gigantic evergreens and Eden-plush greenery standing in stark contrast to the arid desert shrub landscape that dominates much of Crete. As the Crete Urban Adventures founder conducted the educational tour on and downward, I sensed something underneath the interesting history lesson, something that tugged at and nagged me. Rebecca, she’s always a compelling guide, a professional person with an encyclopedic memory for details and information about Crete. So it was, I could not decide if “the ferries” farther along at the bottom of the gorge were a colorful footnote or some legend that we might later discover. Whatever lay ahead, the “fairy” notion stuck like a splinter in my mind. Was the insinuation playful segway into some other point of “coolness?” I wondered if Rebecca was going to unveil a great “secret,” but I found out soon enough. 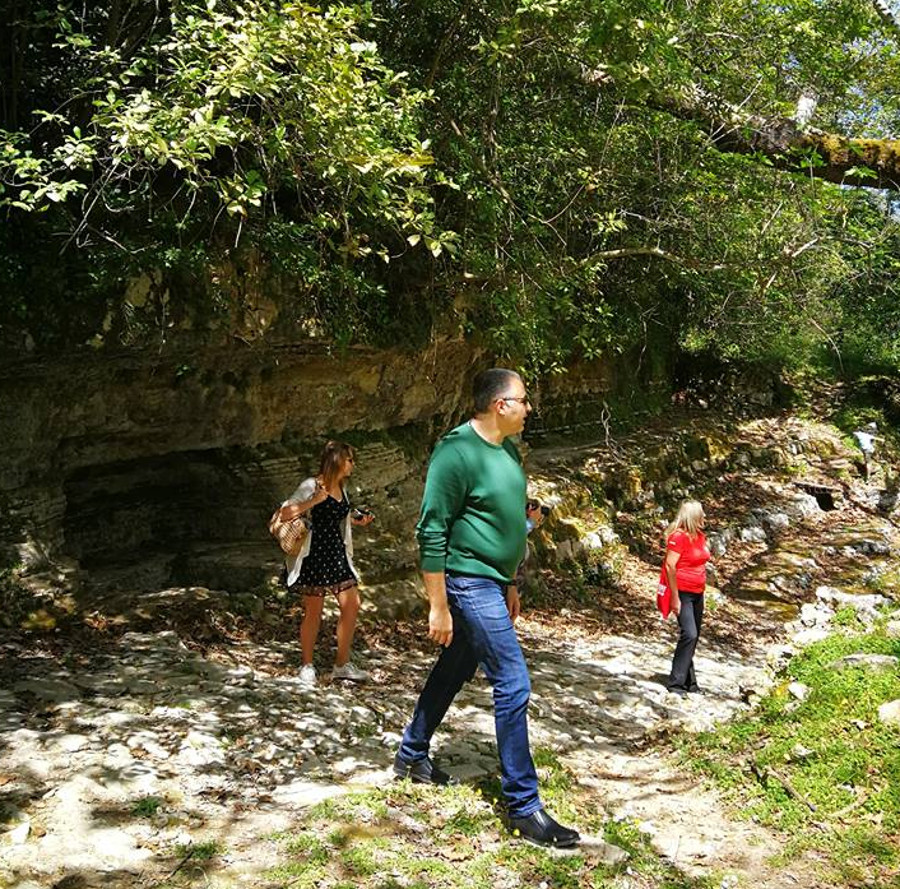 Researching for this story, I discovered that the term “fairy” is derived from “daemon,” which in turn comes from the Ancient Greek word δαίμων. These mythical creatures were originally considered a kind of guiding spirit, or lesser deity. However, other interpretations refer to daemons as the souls of men who act as guides to the living. Learning this, patching together the pieces of my Lappa experience, a few theories of my own are gaining cohesiveness. According to Hesiod, the people of the so-called “Golden Age” were transformed into daimones by the will of Zeus, who as we all know was born and raised on Crete. By these accounts, the purpose of Daemons was to serve mortals benevolently as the guardian spirits of man, bearers of good beings, but spiritual beings who remained invisible, and only known by their acts.” 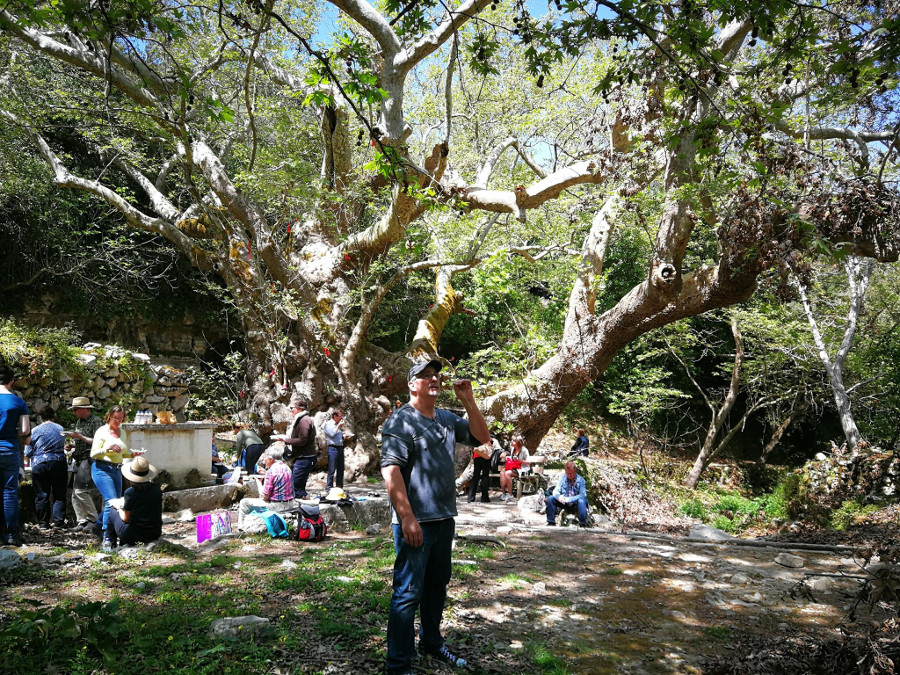 Me and the pilgrims beneath the “Avatar Tree” outside Argyroupoli

Snapping back to the realm of the other today, the farther we descended toward the catacombs of Lappa the more separate from the group I became. At least in thought. I recognized this a bit as Rebecca and the others discussed the church dedicated to the Five Virgins and the associated saintly acts of Thekla, Marianna, Athena, Martha, and Maria. Though interesting, the church possessed a lesser degree of what I would refer to as “holiness” than the Roman cemetery and the “place of the fairies” below.  When we reached the first of the sarcophagi cut into the limestone of the gorge, our guide’s admonition about centuries of burials within the same tombs pushed my “ah ha!” button, I guess. Visualizing what Rebecca described, the mechanics of reverent burials using the same sarcophaguses resonated with me. The way she put it, “no matter what religion you are,” transported me to scripture, and Galatians 3:28:

As we ventured farther along I recalled my philosophy studies and Plato’s Symposium, in which the priestess Diotima teaches Socrates that love is not a deity, but rather a “great daemon,” and that “everything daemonic is between divine and mortal.” Or in an abbreviation, the fairies are the messengers of the gods, the bearers of divine things to mortals, and human things to the immortals. Snapped back to reality by my wife and partner Mihaela, who exclaimed at a new majesty before us, I, at last, returned to a childhood belief in fairy godmothers. Surrounded by a plush carpet of green and two dozen pilgrims, a real-life wonder straight out of the movie Avatar presented itself majestically. The tree rightly might have been the same one at the center of the Eden tale. In fact, the Garden of Eden is the feeling that struck me first watching Rebecca, Mihaela, and the others walking about beneath this marvel. 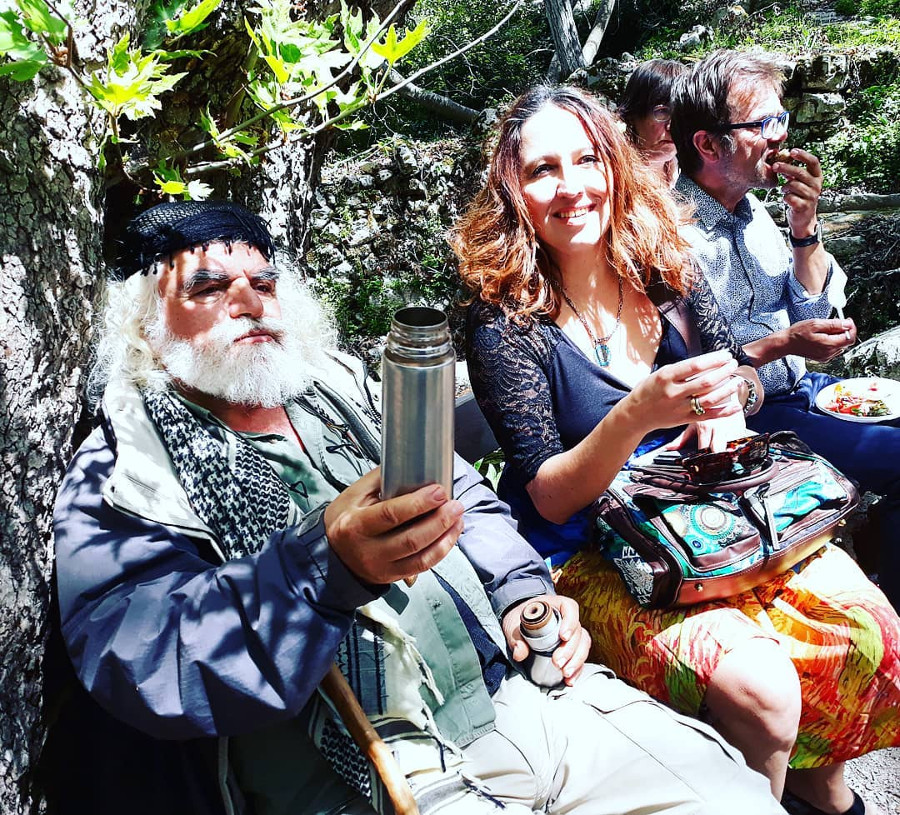 Fitting for my story here, the picnicking backpackers strewed out under the face of God, they seem to fail to notice the “philosopher king” leaning on the tree’s trunk at a bench seated alongside Mihaela.  Selling CD’s of his poetic songs, the graying gentleman sat there dispensing a tea he’d made from the curative waters of the nearby spring. Interestingly, sipping the warm elixir from the man’s Thermos did help this writer’s hurting heart recoil. The story of my episode of sudden cardiac death is fitting for another story, but I mention the damaged muscle here for purpose. Snapping pictures and gawking at the pristine nature around us, we eventually regrouped to head back up the Roman road to our cars. And it was on the return trip the fairies truly took flight.

Trodding the path uphill proved to be good exercise for somebody with heart problems, even though my wife stressed the whole way back. Stopping frequently at her behest, I found the slow pace helped me focus on what some people refer to as “the here and now,” which is something I am terrible at. Snapping a picture or two, admiring the bright green lizards that inhabited this little Eden, I began to take the place in even more fully. The all of a sudden, as fatigue gripped me hard, my “fairy” appeared! To finish this story of supernatural Crete, I must regress to a previous visit to the island. 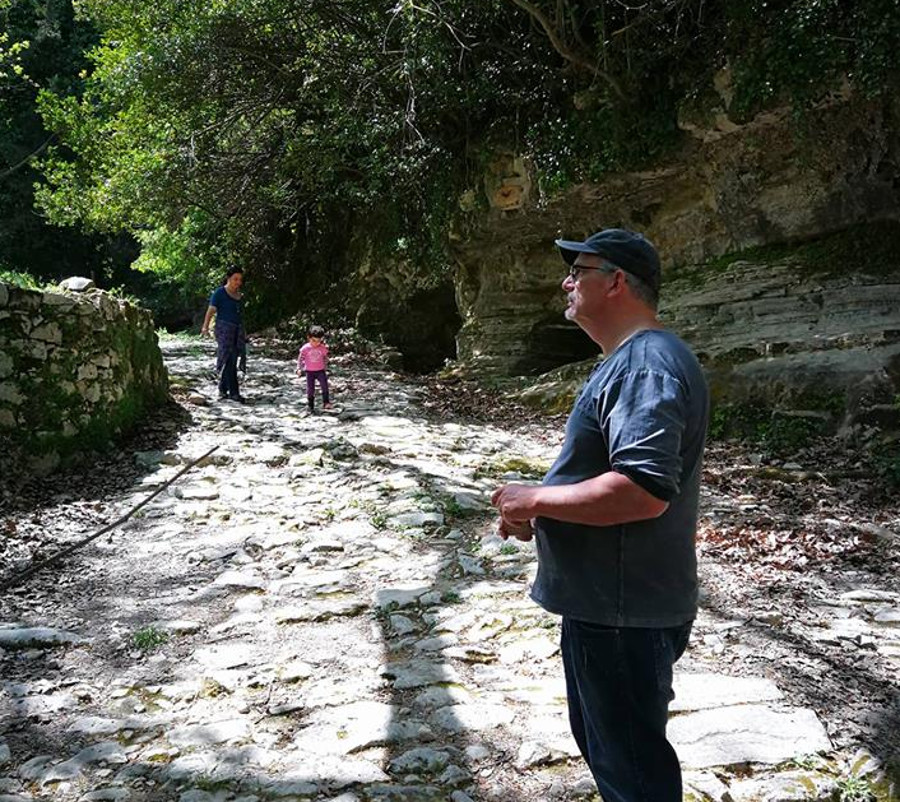 On the road back up. You can see the Roman tombs behind me on the right.

Back in 2014 four friends from high school gathered on Crete to share the experience of the Minoan paradise. Me, Mike Parrish, Jay Thomas, and our friend Johnny Courson took up residence in a villa outside Chania. This story Mihaela and I have told in various forms, several times over the last few years. The point here is that our friend Johnny found out he was deathly ill just before flying to Crete. A couple of years later, and after a superhuman bout with stage-4 lung cancer, and another tragedy took our dear pal. Johnny’s life story is an epic one, but a message to me days before he died has haunted me endlessly. Anyway, Johnny told me on more than one occasion before he died; “Butler, I’ll see you soon back on Crete.” Johnny always called me by my last name.

Fast forward to last week and a familiar “spirit of man” patted my shoulder as a soft, cool wind as I knelt for a breather on that ancient road. I’ll pause here to allow the reader to recall if he or she ever wonders about fairies and the other side of this reality.

Here on Crete “coincidence”is just too common. And nature, history, and culture are just too big. Just too big to not be unique in the world. I won’t venture into legends of Keftiu and the Egyptian rumor about the “island of the dead” – but I can attest to the spiritual essence of this place. Whether or not ancient Lappa holds new secrets to be found, or if Crete does, these are for further study. I simply wanted to tell a new kind of fairytale, a true story of connecting to the other side of what we think we know.

Until our next “Best Day Ever” – as Rebecca has monikered her tour company – I’ll be pondering all the souls that passed through here ;)