As we thread our way down the sheer cliffs en route from Pollonia to Kypos on the first leg of our excursion to legendary Kleftiko, we see a boat lying at anchor. This must be the place! The Delfinia (Dolphin) will sail us southwest along Milos’ rugged coastline, about an hour’s sail from Kypos, to this one-time pirates’ lair. 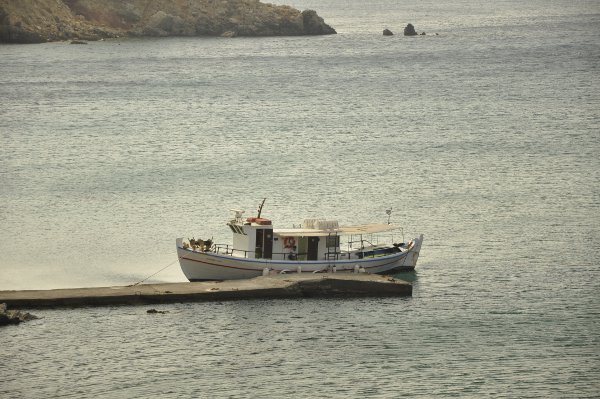 The Delfinia - courtesy the author

At Kypos Taverna, perched high above a rocky cove, Captain Psathas welcomes us and indicates we should head down to the beach toward the pier where the stalwart fishing vessel sits at anchor in the bay along a narrow concrete pier. The engines rev as we pull away from the cove; the sky clears of morning haze.

Once underway, the captain shares some history about Kleftiko and Aegean pirate history (in Greek; a crew member translates into English). We are Italians, Spaniards, Russians, Brits and Americans but, for this voyage, we are Greek. 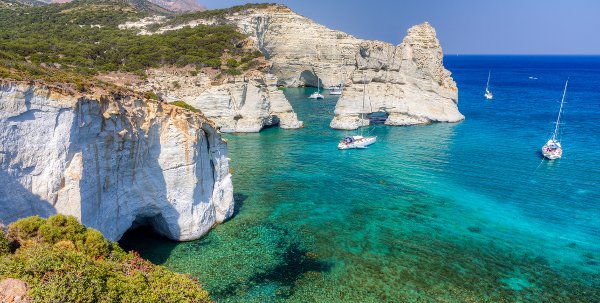 The legendary, dramatic southwest of Milos, our destination, is accessible only by boat. The captain tells us that sometimes Delfinia is the sole vessel at Kleftiko. Already, we are praying that, today, Kleftiko will be ours alone. As the barren and secluded coast glides by, we view rocky escarpments, the contours of which evidence significant volcanic action and erosion. We see a large mining operation and a tremendous ship sits at anchor awaiting its payload of minerals.

We pass several colorful Greek fishermen’s sirmata (small boat “garages,” or storage areas) cut into cliffs which are backed, on distant hills, by wind turbines spinning so quickly in the meltemi, we see only blurs. Fishermen aboard various seagoing vessels are throwing fishing nets overboard between waving to our fellow passengers, playing bouzoukis and singing Nisiótika (Greek folk songs). 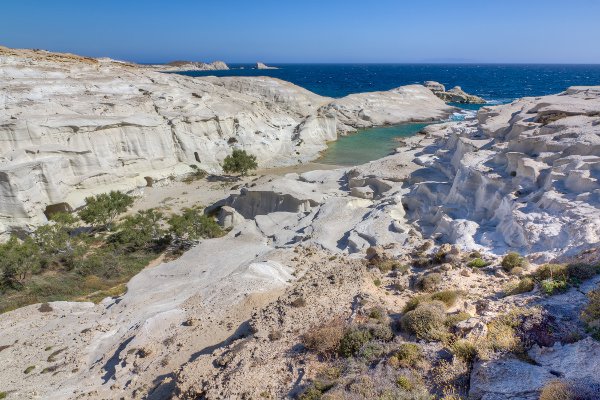 Ahead, white cliffs tumble down to the sea and many outcroppings of chalky white rocks reflect the brilliant sunshine. We also observe several small bays on whose narrow beaches a few die-hard beach-goers are joyfully plying gentle waters and exploring caves which back the headlands. Small wonder this part of Milos was so attractive to pirates. On the north coast otherworldly Sarakiniko (above – named after Saracen pirates) and environs is known for its many cave hideaways. There were many other natural hideouts—caves and cliffs—where pirates were once active along Milos’ coasts.

From our vantage point aboard Delfinia, the island appears uninhabited as we sail along the southern coast. A smattering of goats and sea birds ply sheer rocky cliffs in search of food. This western outpost, wild and undiscovered, has few roads and even fewer visitors. Only stalwart explorers tend to venture into this hinterland. Those who undertake a visit to western Milos are amply rewarded with secluded beaches and wild natural beauty. 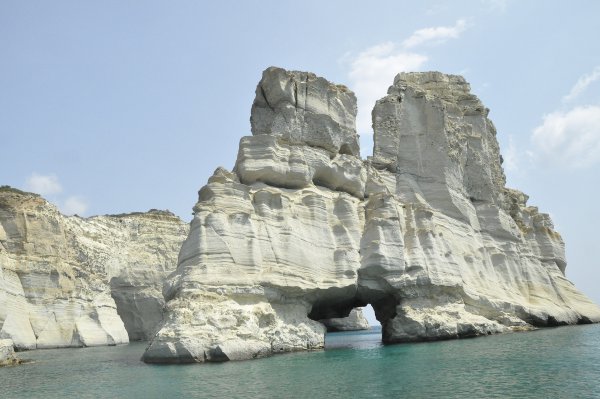 As bright sunlight breaks through, scattered caves carved into the promontory signal we are nearing our destination. In the distance, soaring cliffs spring up from the sea. There are mysterious shadowy caves filled with crystalline blue water in the radiant sunshine along the coastline as well as within the towering rock formations themselves, all surrounded by the shimmering Aegean. Kleftiko (also known as Thalassina Meteora, “The Sea of Meteora”), is far more breathtaking than we had expected. White cliffs juxtapose against verdant hillsides and aquamarine water, which turns nearly translucent as we approach Kleftiko’s very heart.

We can hardly wait to hurl ourselves into the water and swim through the mysterios caves, imagining the glitter of pirates’ booty glinting on the cave floor so far below us. Soon enough, the entire boatload of our fellow passengers is happily swimming in and out of these seductive caves. We hear some splashing and wonder what denizen of the deep is approaching. We turn to see a gaggle of sea kayakers enthusiastically paddling its way through caves and along the cliffs.

Some caves are large enough to accommodate an entire school of kayakers and small boats, while others are minuscule, barely large enough for a single swimmer. In the caves, we call and listen for echoes, wondering just how deep into the cliff face the caves extend. We watch kayakers thread their way through circuitous caves; some exit the other side while others turn back as the caves dead-end or the too-small passages necessitate retreat. 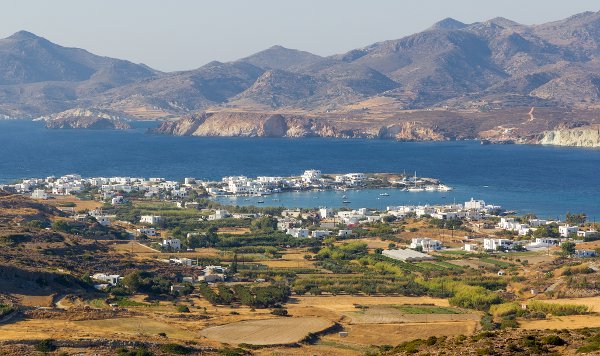 Once a pirate harbor, the village of Pollonia - Courtesy © Lefteris Papaulakis - Fotolia.com

In the cove at Kleftiko, everyone gives his fellow pilgrims sufficient “space” so no one feels crowded or needs share his incredibly solitary moment in time. It is a singular, unforgettable and exhilarating experience to be savored.  The current is gentle and we swim towards the pebbly beach, catching our breaths, but allowing everyone within our party the opportunity to “own” the beach in solitude.  We find a black stone to inscribe our names on the cliff face, along with dozens of others. After two unforgettable hours, sufficiently winded and exhilarated, we return to Delfinia.

With heavy hearts, we board Delfinia and, as the boat turns toward Kypos, everyone tries, in his own way, to capture Kleftiko in heart and mind. We are not alone in our reverie; there is utter silence for the homeward voyage. Awed, silenced and introspective, Delfinia’s passengers have retraced the paths of treasure ships and pirates. Milos, the incomparable island of Venus de Milos, “island of colors,” has captured an indelible place in our hearts after this voyage. 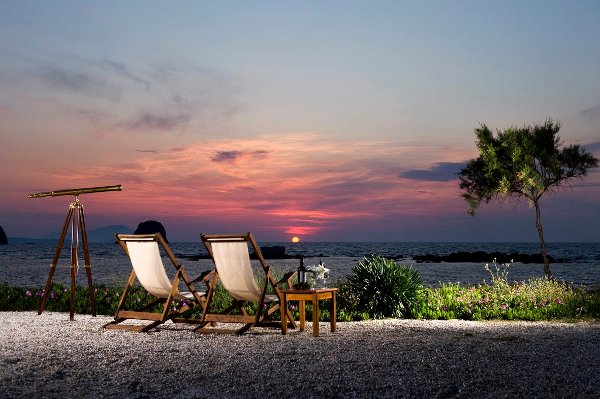 Home base for our visit to Milos is the unforgettable ocean-front Nefeli Sunset Studios (above) in Pollonia. Nefeli is owned and operated by extraordinary hosts Roula and Makis Diakaki Two Cycladic buildings front the sea; each room, studio, apartment or suite features en suite bath, patio and many types of bedding along with daily housekeeping. Concierge service for excursions, dining and activities.

A Brief History of Pirates in the Greek Islands

Milos (in Greek Μήλος) had, for millennia, been a refuge for seagoing bandits we call pirates. He explains that the word “piracy” has roots in ancient Greek πειράομαι, or peiráomai, (“attempt”). The word evolved into πειρατής, or peiratēs, (“brigand”) and then to Latin pirata, from which English pirate was ultimately derived. When threatening navies dominated the Aegean (by Athens in the 5th century B.C.; Rhodes during the 2nd century B.C.; Rome during the 1st to 3rd centuries A.D.; Byzantium during the 6th to 11th centuries A.D.; and Venetians during the 12th to 15th centuries A.D.), piracy was suppressed. But at other times, such as during wars or when navies were engaged elsewhere, pirates subjugated the Aegean.

After the Roman Empire was divided, Milos became part of the Byzantine Empire. These were dark times for Milos. It was afforded no protection from almost constant onslaughts of Venetian, Genoese, Corsican, Berber and Saracen pirates and kourso (corsairs). Venetians occupied Milos after the fourth Crusade and the island was ruled by the first Duke of Naxos, Marco Sanudo, son in law of the doge Enrico Dandolo. The family ruled the island from 1207 to 1361. Under the family’s reign, Milos slowly prospered. In Chora harbor, pirates and corsairs were lured by rich cargoes, earning the harbor the nickname ‘den of pirates.’

The Crispi family then ruled Milos from 1361 until the Turkish occupation in 1566. Ongoing feuds between Ottomans and Venetians and raids of both Christian and Muslim pirates led to the abandonment of most of the Aegean islands. In the mid-1500s, Milos was one of only five inhabited islands in the central Aegean. 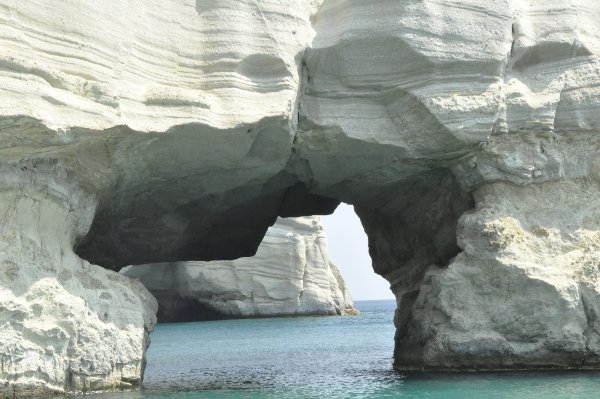