For the next three months nighttime becomes a sort of extended, mystical twilight in many parts of Russia. Coming to St. Petersburg May 23rd through July 31st, the Stars of the While Nights Festival is an experience to never forget. 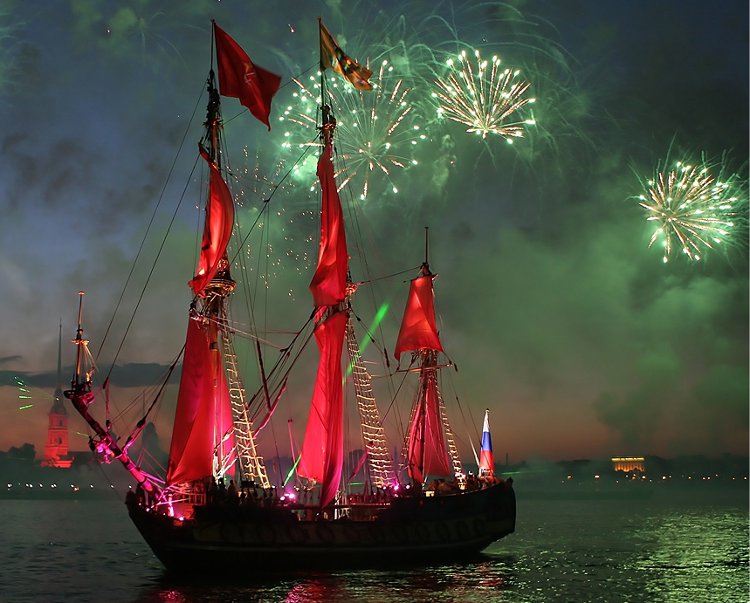 The festival, an impressive extravaganza of the arts, affords locals and visitors to this magical city an unparalleled pageant of ballet, film,  music, opera, and outdoor celebrations including the Scarlet Sails (image above), a fleet of red-­sailed, tall ships that accompany a fabulous fireworks exhibition.

From roving gypsy banks and jugglers along the River Neva, to sword swallowers and fire eaters, the nights are very long indeed in this part of Russia during the event. For those who do not know, the White Nights season in Saint Petersburg, is the largest public event anywhere in Europe. It’s estimated attendance last year was four million people, most of whom are students from thousands of schools and colleges worldwide. Young people from the Russian Federation, Germany, Austria, Ukraine, France, Italy, Norway, Sweden, Finland, Denmark, Belarus, Estonia, Latvia, Lithuania and Moldova are represented, among the many, many other nations.

This year the fest kicks off with an invitation ­only exclusive in Place Square on Vassiliyevsky Island. The event has previously featured Cirque de Soleil, Antonio Banderas,  Paul McCartney, and The Rolling Stones, among many other international acts and celebrities. There’s culturally, not anything like this festival, anywhere in the world.

Details of the XXII International Stars of the White Nights Festival will be out soon, we’ll keep you appraised. Meanwhile here’s a video of last year’s event.

Crete’s 2022 Summer: Already Burning With Fun
What If the Secrets of Keftiu Could Rescue Humanity’s Future?
Odd Christmas Traditions Around the World
The Connectedness of Beauty: A Secret of Crete Few People Know
Previous: Waldorf Astoria Opens a Luxury Hotel in Amsterdam
Next: UNESCO Intangible Heritage Event: Kirkpinar Oil Wrestling 2014