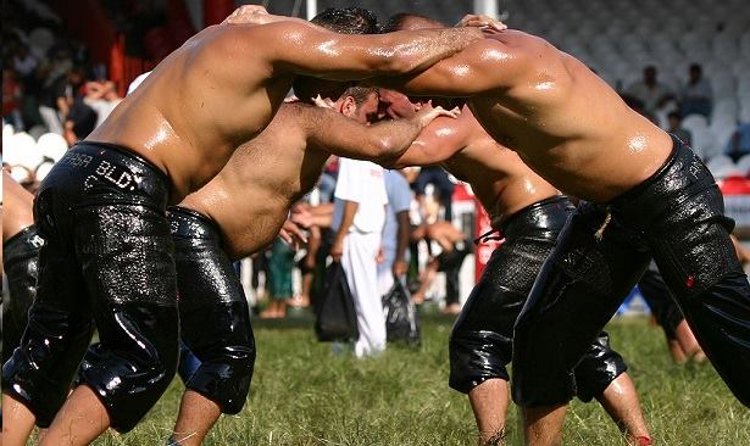 This “last man standing” festival awards the coveted Kirkpinar Golden Belt and the title of Chief Pehlivan, to the man who can win the competition, one of the oldest sporting events in human history. Set against the legendary traditional matches, today’s competitors do not wrestle to the death, as was once the custom. The competition, open to men from all cultures, religions, and ages, to via to become Turkish cultural heroes themselves. Kırkpınar holds a Guinness World Record for the longest running sports competition.

As is the custom, the fest is begun by its patron, the Kirkpinar Aga, in a ceremony featuring 40 bands of davul drums and zurna shawms. Then, the golden prize belt is carried through the city in a procession, followed by prayers recited at the Selimiye Mosque. The wrestling bouts start at the Men’s Field in Edirne.

Clad only in leather pants (kisbet) the combatants are drenched in olive oil and set against one another in ritual wrestling combat. For more information on this year’s event, readers should visit the links provided, the event’s Facebook, or contact the city of Edirne here.

Turkey Wildfires Are the Worst Ever – Experts Say It’s Only the Beginning
Turkey Opens 2,900-year-old Altintepe Fortress to Tourists
Panagia Sumela Monastery Frescoes Vandalized in Turkey
The Troy of Legend Now Thought to Be Much Older
Previous: Preview: Russia’s Unforgettable Stars of the White Nights Festival 2014
Next: Adventure Saturday: Exploring the Wilds of Russia